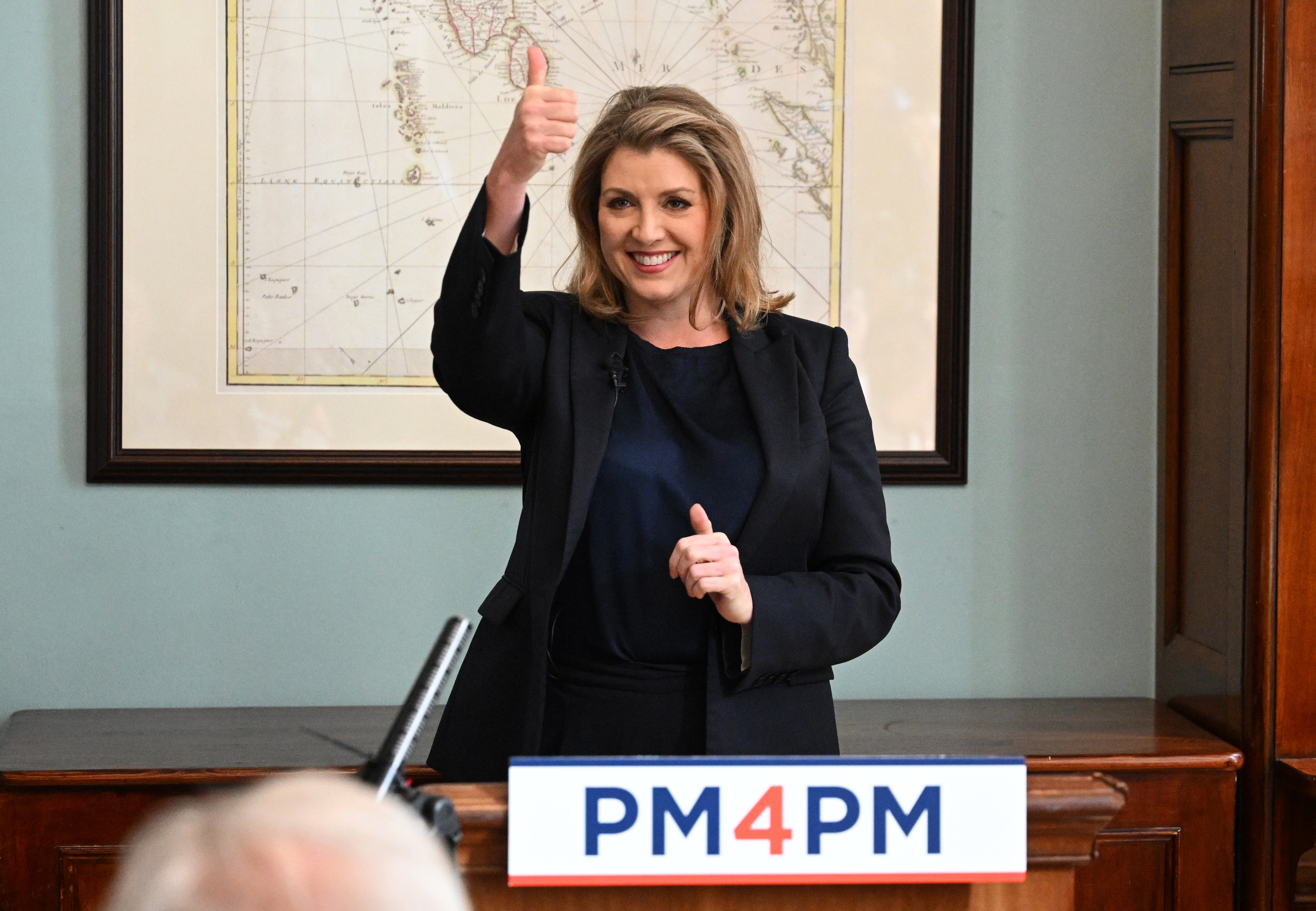 After being mired in months of scandal, the Conservative party finally imploded last week when soon-departing Prime Minister Boris Johnson announced he was resigning.

The self-described ‘Big Dog’ realised his position as leader of the Tory party was no longer tenable when more than 50 of his own MPs called for him to quit – including former Health Secretary and ex-Chancellor Nadhim Zahawi (Chancellor for just 24 hours before turning on the PM and calling for his head).

But Johnson’s humiliating exit from No. 10 saw many Conservatives, who were poised and ready to pounce, launch their own leadership campaigns. Over the last week, Tories from all factions of this increasingly divided political party were willing to take a crack at the top job, from pandemic Chancellor Rishi Sunak to unknown junior minister Rehman Chishti.

While Sunak, and fellow Cabinet member Liz Truss were once seen to be the natural successors to Johnson’s toppled regime, it’s the rise of Penny Mordaunt, the Minister for Trade Policy, that may have blindsided some political pundits.

Mordaunt, who has served as the MP for Portsmouth North since 2010, has now polled as the runaway favourite to become Prime Minister by Conservative Party members. She’s also become the bookies’ preferred choice for the top job, with odds of 8/11.

It’s somewhat surprising, considering Mordaunt is a relative unknown to the wider electorate, having made her first dent in the public psyche via a now defunct reality TV show.

The 49-year-old’s background differs considerably to the upper echelons of much of the Tory party; the Devon-born candidate is distantly related to Angela Lansbury (yes, the woman of Murder She Wrote fame).

From more humble beginnings than the slick multi-millionaire Sunak, Mordaunt is the daughter of a former Paratrooper, raised alongside her twin brother James and younger brother, Edward. After losing her mother to breast cancer aged just 15, Mordaunt committed to her studies at a Catholic comprehensive: taking a gap year to work in hospitals and orphanages in Romania before studying Philosophy at Reading University. To pay for her studies, she became a magician’s assistant, recalling being ‘sawn in half’ on stage.

But her rise to the political arena is a well-trodden path:  joining Conservative Central Office under William Hague and boasting 12 years as an MP.

Political commentator Emma Burnell briefly crossed paths with Mordaunt six years ago when she was a minister at a Conservative Party conference.

‘Mordaunt does have very good people skills,’ she tells Metro.co.uk. ‘She certainly is good at that “small p” politics that can be forgotten in wider campaigns but is so important. She has a bit of a “jolly hockey sticks” attitude, but I feel that does go down really well with the Tory grassroots.’

While Mordaunt’s decision to run for Prime Minister may seem surprising to the wider population, it’s not particularly big news for Tory insiders.

‘Penny running for leadership has been an open secret for a long time,’ explains Nic Conner, Account Director for PRO as well as a Research Fellow, Bow Group and former Conservative and Vote Leave staffer.

‘You have to remember Penny was the campaign manager for Andrea Leadsom’s run for Leadership in 2016, if Andrea stayed the course, it was expected she would have defeated Theresa May in the membership poll. Penny has inherited the Leadsom campaign, even launching at the same venue in Westminster as Andrea did in 2016.’

Despite her alliance with Leadsom, May offered Mordaunt a fairly tasty Cabinet position when she was in power – after being the Secretary for International Development, in 2019 she was promoted to Secretary for Defence. However, the position was short-lived, and Mordaunt was demoted when Johnson took the top job – with sources pointing towards a ‘clash in personalities’ between herself and the PM.

Yet whatever her relationship may have been with Johnson, she chose to stay in his Cabinet during his crumbling last days, leading some to describe Mordaunt as PM as a ‘continuity Johnson’. Others, however, perceive her as ‘Theresa May with bigger hair.’

‘Whether she is genuinely competent remains to be seen,’ Burnell explains. ‘But she certainly projects the image of competence. She comes across with a posh, head girl manner that Tories really like, Tory members really like, and the rest fall for quite a lot.’

However, since claiming her stake in the race to be PM, Mourdaunt hasn’t been without her critics. Some of the bigger political beasts have keenly taken shots against her, claiming that in her more senior roles the MP has been deeply incompetent.

On TalkTV, Mourdant’s former boss Lord Frost said he had ‘grave reservations’ about her bid to get into No. 10, saying she did not ‘master the detail that was necessary’ when negotiating with Europe when she worked as Trade Secretary.

Another cause for concern amongst Tories are her somewhat vague political ideology and policies. She campaigned for Brexit in 2016, describing it as a ‘massive opportunity’, while also vowing to raise defence budgets and ‘lower taxes.’

‘You need some policies at election time, but unless Mordaunt is planning to hold a snap election in the Autumn, she’s got plenty of time to sort that out,’ she explains. ‘From what I’ve seen, she’s trying to find a common ground in a divided party.’

A clearer picture of Mordaunt’s political beliefs could perhaps be drawn out by her previous voting history. She has voted consistently against raising welfare benefits, as well as standing against a banker’s bonus tax. She also supported repealing the 1998 Human Rights Act.

Elsewhere, Mordaunt advocated banning conversion therapy for all LGBTQ+ people and  reforming the Gender Recognition Act – policies that were dropped by Johnson.

‘She could be described as a Thatcherite but with a sprinkling of liberalism,’ muses Burnell.

However, it seems Mordaunt has done a hard U-turn quizzed about some of her campaigning for more liberal policies. When launching her bid for leadership, she waded into the trans-rights conversation, the debate that has inexplicably captured the attention of many right-wing pundits in the ongoing culture wars – with many seriously and sincerely asking whether a woman can have a penis.

‘Let me deal with the issue floating around in the background,’ she said as she announced her leadership bid. ‘It was Margaret Thatcher who said that “every Prime Minister needs a Willie”. A woman like me doesn’t have one.’

It’s a comment which could prove off-putting for an electorate who would rather more efforts were aimed at the cost of living crisis, with millions of people facing the difficult choice of heating and eating as energy bills soar.

Mordaunt also has no concerns about inserting herself into cultural debate and discussion – be it serious, or be it a part of pop culture.

While serving as an MP, she appeared on short-lived reality TV series Splash in 2014 – drawing criticism from the Opposition. Mordaunt donated her £10,000 fee to charity, and was painfully seen by millions bellyflopping into the pool.

She also attracted criticism when she delivered a speech on poultry welfare in 2013 – with liberal usage of the word ‘cock’ – after losing a bet with Royal Navy colleagues, where she has served as an officer for a decade.

Recalling the incident at an event for The Spectator in 2014, Mordaunt explained she was ‘fined’ for a misdemeanour while at dinner, and her penance ‘was to say a particular word, the abbreviation of cockerel, several times during a speech on the floor of the House of Commons and mention all of the officer’s names present.’

While this sort of behaviour would have been typically widely lambasted from both sides of the chamber, buffoonery and self-promotion have been a firm part of the Boris Johnson playbook of politics – which ultimately saw him secure the top job – so such ‘japes’ seemingly no longer serve as a reason to retire someone from a leadership race.

In fact, a slightly sillier approach to politics may explain Mordaunt’s frankly bizarre campaign video, which announced her run for leader released earlier this week.

The three-minute effort plays out almost like a parody video, with a hammy actor’s voice talking about what ‘makes Great Britain’, while ‘I Vow To Thee My Country’ booms out over drone shots of the British countryside.

For the laughs it raised, Mordaunt’s video caused controversy for featuring murdered Labour MP Jo Cox, alongside footage of disgraced athlete Oscar Pistorius from the 2012 Olympics.

Elsewhere, other high-profile figures, including Paralympian Jonnie Peacock, requested to be removed from the video as they did not want to be associated with the Conservative party, or Mordaunt’s campaign.

‘But as people complained, it also raised the profile of the video,’ Burnell points out. ‘As we’ve seen in the last few years, making big public mistakes doesn’t make the public hate you until you make them at their expense. From polling figures, the video doesn’t seem to have damaged Mordaunt at all.’

However, she warns there’s only so many stunts the public can stomach.

‘We want people who are real and maybe have a sense of humour, but we also want them to do their jobs effectively,’ adds Burnell. ‘That’s what eventually undid Johnson.’

Instead, it’s Mordaunt somewhat comfortable position in the centre that makes her the best candidate to unite an increasingly fractured Conservative party.

‘Mordaunt is a more unknown quality, so people can project onto her a bit,’ Burnell explains. ‘She is liberal but right wing economically so she can fish in both pools, where someone like Liz Truss can’t have that broad appeal.’

Should she be made Prime Minister, Mordaunt may prove to be a challenging adversary to the Labour leader Keir Starmer, who has impressed in recent weeks with his performances at Prime Minister’s Questions.

‘Mordaunt doesn’t feel unbeatable in the same way Johnson used to,’ Burnell adds. ‘But if she can combine personality with competence, she may outshine Starmer.

‘Labour has by no means sealed the deal when it comes to winning an election, but I think this would be the toughest election for the Tories to win in a long time. Mordaunt would have to provide solid policies while also being appealing to the wider electorate.’

But should she want to survive as Tory leader and Prime Minister, she needs to learn from the mistakes of her predecessor.

‘Mordaunt needs to look at what Boris did and do the opposite,’ Burnell concludes. ‘She needs to have a deeply talented bench behind her. Boris had a talentless bench of mediocre ministers, and look how that turned out. You need people who can do their jobs, electorally and politically.

‘It’s also a sensible way of running a country… but that seems to be secondary to politics right now.’