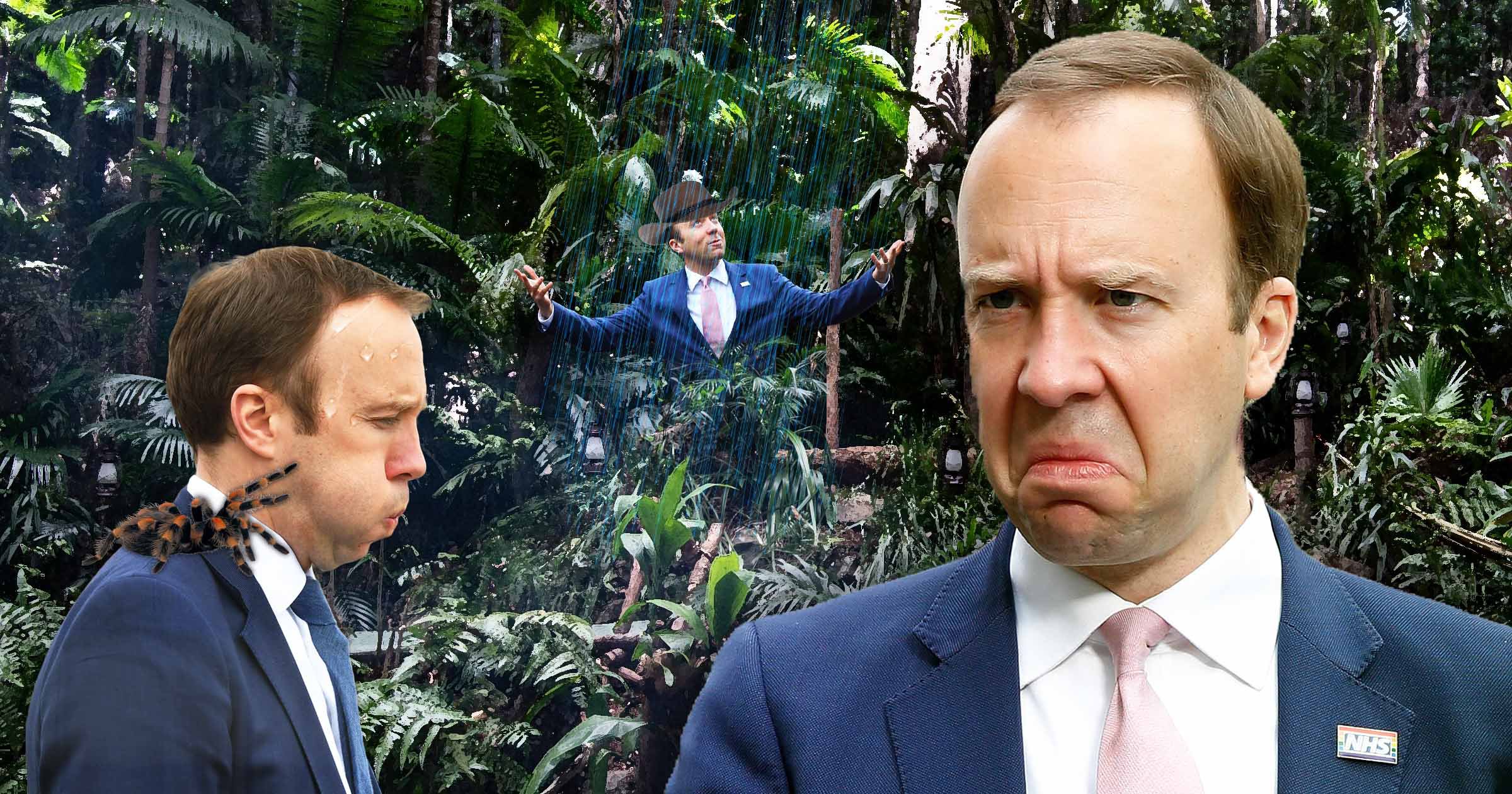 In a move no one was expecting, Matt Hancock is set to join this year’s line-up of I’m a Celebrity… Get Me Out of Here!

Thousands will soon watch on as the Tory politician eats beastly body parts from all manner of animals.

But will the disgraced ex-Health Secretary be able to regain the respect he once held with his Conservative Party colleagues – as well as the wider British public?

Experts suggest he could – but only if he emerges to be a ‘viewer favourite’.

Mr Hancock lost his job after CCTV footage was leaked of his passionate kiss with aide Gina Coladangelo in June 2021.

His flagrant disregard for his own Government’s social distancing rules, as well as the very public affair, marked a swift demise for the West Suffolk MP.

Mr Hancock’s foray into reality TV could now suggest he has hopes for a new era of his political career.

But experts say it will take more than a spell with Ant and Dec to fix his image.

Chris Stafford, doctoral researcher at the University of Nottingham politics department, told Metro.co.uk: ‘I don’t think Matt Hancock will have a political career after this, unless he somehow turns out to be a viewer favourite.

‘I suspect he has chosen to enter the show for his political career but also for a showbiz career as well. But he underestimates just how unpopular he is with the public.’

Following the announcement of his I’m A Celeb appearance, Hancock’s whip was promptly removed.

It appears unlikely he will be able to run as a Conservative MP again, let alone get a seat in government.

Mr Stafford added: ‘They have taken away the whip, so he is still an MP but not a Conservative MP, so he is not bound by the usual rules.

‘Whether he would be making a difference in the Commons is debatable anyway, but now he is not there to show he is actually trying.

‘I don’t think he would be chosen as the next Conservative candidate anyway. His political career has essentially ended and he is looking to rebrand.’

Dr Ellen Watts, assistant professor in politics at the University of Nottingham, said Mr Hancock will have already resigned himself to the need for a ‘rebrand’.

The academic told Metro.co.uk: ‘Following the fallout from his affair, breach of lockdown restrictions, questions around his role in the PPE scandal, and having not been given a role in Rishi Sunak’s government, this seems the choice of someone who already feels their front bench days are behind them.’

Mr Hancock’s West Suffolk constituents have been left without an MP while the politician prepares for his I’m A Celeb journey.

But the 44-year-old has tried to justify his decision by claiming he wants to ‘go to where the people are, not to sit in the ivory towers in Westminster’.

He has argued producers will still let him take calls from constituents.

Dr Watts added: ‘It’s not clear how he could work or what work he’ll actually be able to do.

‘Maybe he’s assuming, as many celebrities have previously debunked, that the show is not “real” and he’ll have plenty of time to take calls at the hotel instead of eating rice and beans around the campfire.

‘But this is different in how long Hancock could potentially be away, and most importantly in how it looks. He could be away for most of November. Most importantly constituents may well now feel cut off from Hancock.’

Allies of Mr Hancock have also claimed he is entering the show to raise awareness of dyslexia, a move which Dr Watts deemed risky.

She added: ‘Using reality TV shows to raise awareness of anything other than yourself is a risky, possibly naïve strategy.

‘I think it’s also fair to ask whether a better place to try to increase support for a bill in parliament, is in parliament.

‘I think he’s looking ahead to a career outside of parliament, he may be trying to get rehabilitate his image and show a different side of himself.’

However Hancock is not the only serving MP to have go down under.

In 2012, Nadine Dorries entered the show, but was decidedly booted off the first chance the public got.

Although she had the whip immediately removed, she still came back and now has a seat in Government.

It is unlikely Hancock will be met with the same on his return.

Mr Stafford summarised: ‘Nadine didn’t have a scandal when se went into the jungle so it fared a bit better for her. But the public have simply turned against Matt Hancock.

‘In the past people haven’t had the whip removed that quickly, but it doesn’t surprise me so much that Hancock did. He came with a lot of baggage.’