Fundraising hero Captain Tom Moore has been knighted by the Queen during a unique private ceremony at Windsor Castle.

The 100-year-old Second World War veteran earned himself the honour after raising almost £33m for the NHS as it battled to cope with the coronavirus crisis.

Donations came flooding in after Sir Tom set out on his challenge to walk 100 lengths of his Bedfordshire garden before his special birthday earlier this year, and his achievement led to the prime minister nominating him for the award. 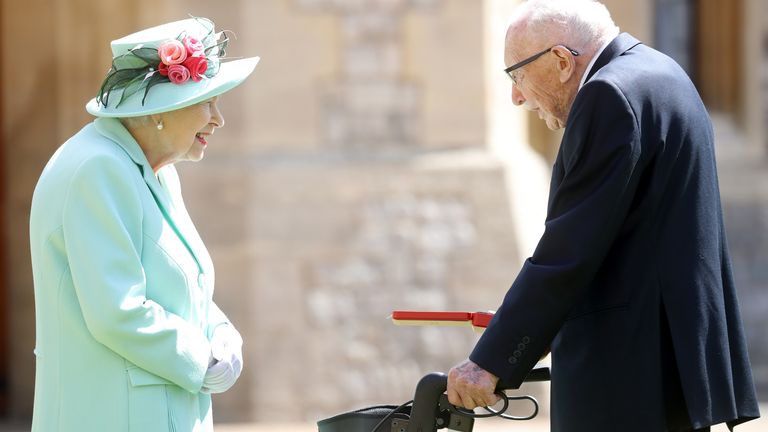 While other investitures due to be held at Buckingham Palace and the Palace of Holyroodhouse in Edinburgh in June and July were postponed, a special exception was made for Sir Tom.

The Queen, 94, has been staying at Windsor during the COVID-19 pandemic for her safety, but carried out the official engagement in person.

The palace said Her Majesty used a sword that belonged to her father, George VI, for the ceremony. 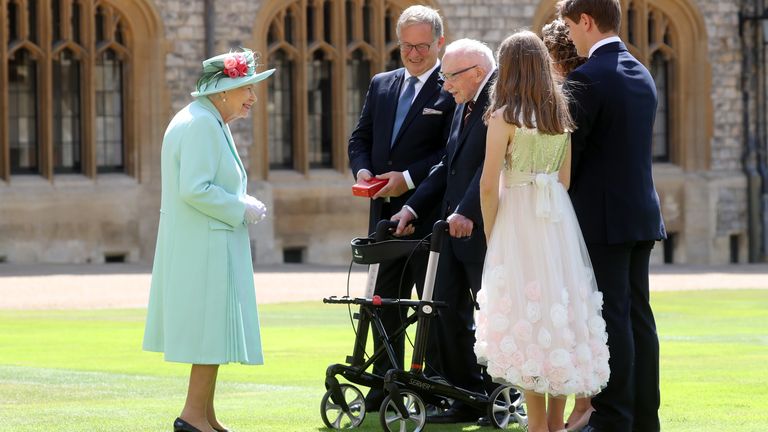 She spent around five minutes chatting to Sir Tom and his family, and personally thanked him, saying: “Thank you so much, an amazing amount of money you raised.”

The monarch was also overheard telling the former Army captain that “one hundred is a great age”.

The talk then turned to national events and the coronavirus, with the Queen, who has been sheltering with Prince Philip, asking: “Have you been shut up – been isolating?”

Ahead of the event, Sir Tom tweeted that he was “raring to go”, for what he said would be a “very special day” for him, and thanked everyone for their well wishes.

Royal commentator Dickie Arbiter described the monarch’s decision to give Sir Tom his knighthood in an individual ceremony as “very significant”.

He said: “The Queen has always said she ‘needs to be seen to be believed’ so today she will be seen – the last time we actually saw her physically was in June in the alternative Trooping the Colour at Windsor Castle.”