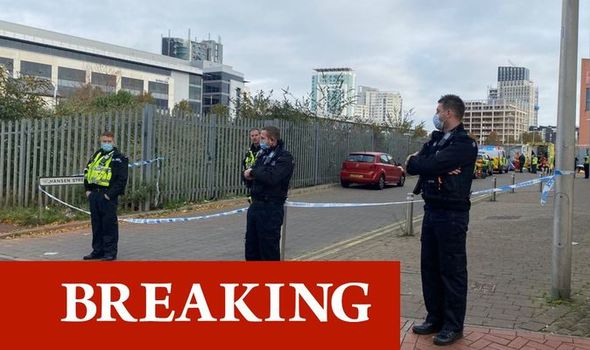 Nine police vans and three ambulances are attending the scene in the Dumballs Road area of Cardiff.

South Wales Police are advising members of the public to avoid the area and a cordon is in place.

An air ambulance was also at the scene earlier this morning, according to Wales Online.

The incident is very near to the Huggard Centre, a facility for people sleeping rough in Cardiff.

However, a spokesperson for the centre confirmed that the incident did not occur “within the building”.

They said: “There has been an incident in the vicinity of our building that the police and ambulance have been attending.

“The building is still open to homeless people and we are still providing our services.

“We’re co-operating in any way that we can at the moment with the police and ambulance service.”

The cafe in the housing options centre is open and people in the Huggard Centre are being told to use an alternate entrance.

The Criminal Investigations Department and a forensics team are also attending the scene.

A helicopter has also been seen by residents flying overhead.

“Armed police and buildings being told to lockdown.”

A spokesperson for the force said: “We are currently dealing with an incident in the Dumballs Road area of Butetown Cardiff.

A police cordon is in place and more information will be provided as soon as possible.”

Hansen Street is currently closed, however, Dumballs Road is open as normal.