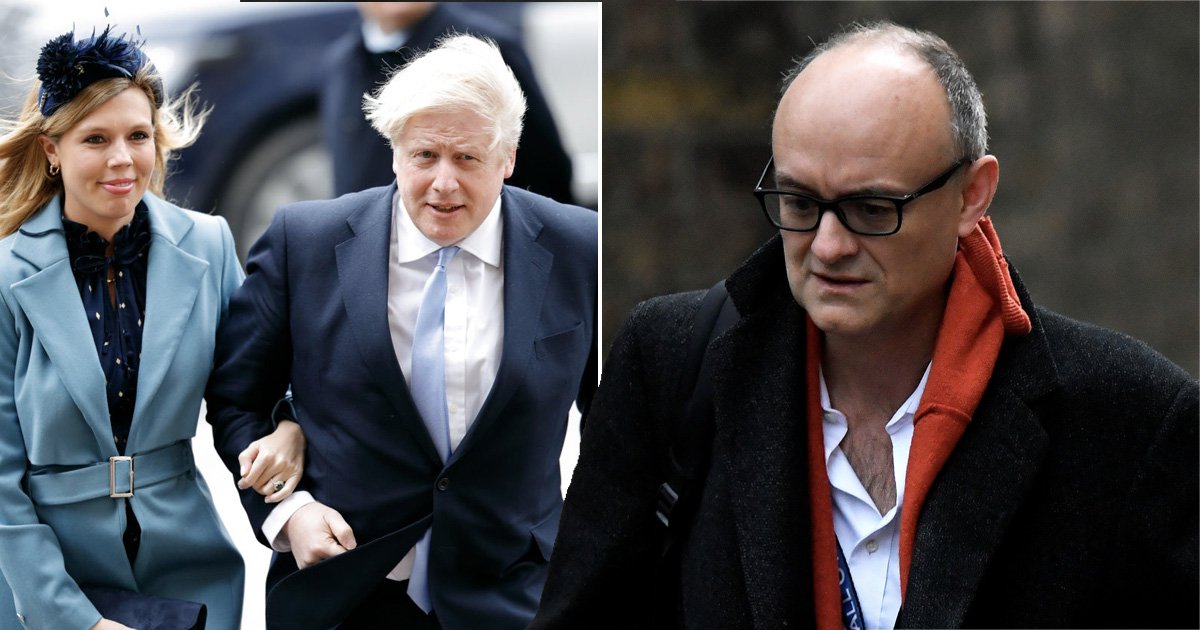 Boris Johnson’s fiancee ‘put him up’ to attacking Dominic Cummings, leading to an all-out war with his former top political adviser, it has been claimed.

The Vote Leave mastermind, who left Number 10 in November amid a bitter power struggle, was accused this week of leaking texts between the Prime Minister and billionaire Sir James Dyson.

In the messages, Johnson promises to ‘fix’ a tax issue for Dyson staff working to develop ventilators at the height of the coronavirus pandemic last year.

Cummings denied accusations that he was the ‘chatty rat’ responsible for leaking the messages, as well as plans for a second lockdown, and launched a blistering attack in retaliation.

In an explosive 1,100 word blog post, he called the PM ‘incompetent’ and said he had fallen ‘far below the standards of competence and integrity the country deserves’.

The Prime Minister has now been forced to reject claims he stepped in to stop officials looking into who tipped the press of a second lockdown in autumn because it may have implicated his fiancee Carrie Symonds.

It is understood Johnson’s personally ordered a No 10 spin operation against Cummings over a number of damaging leaks.

One Westminster source claims he was ‘put up to it’ by Miss Symonds and said this was her way of ‘flexing her muscles’, the Daily Mail reports.

Both she and the Prime Minister were outraged by leaks on Johnson’s dealings with Sir James Dyson, Saudi leader Mohammed bin Salman and the six-figure redecoration of their No 11 flat.

The media were briefed on Friday that the PM believed his former right-hand-man was was ‘engaged in systematic leaking’ and had become ‘bitter about what’s happened since he left’.

He left No 10 after he and former communications director lost an internal power struggle against Miss Symonds and was said to be ‘bitter’ about his exit.

An ally of Cummings warned the PM would ‘live to regret’ targeting his former aide.

In his response, Cummings accused Downing Street’s new director of communications, Jack Doyle, of making ‘a number of false accusations to the media’ against him ‘at the PM’s request’.

He said he would happily share the contents of his phone with a leak inquiry.

Cummings said Cabinet Secretary Simon Case had told Johnson he was satisfied he was not the source of the leak.

The Prime Minister’s new Director of Communications Jack Doyle, at the PM’s request, has made a number of false accusations to the media.

The PM therefore knows that I was not the source of the leak and that the Cabinet Secretary authorised the Prime Minister’s Official Spokesman to tell the media this, yet he has now authorised his DOC to make this accusation.

The Cabinet Secretary knows the above is true and obviously can see our messages regarding this on his own phone. He behaved with complete integrity during this difficult incident.

These events contributed to my decision to stick to my plan to leave No10 by 18 December, which I had communicated to the PM in July the day before my long-delayed operation.

The proper way for such issues to be handled is via an urgent Parliamentary inquiry into the government’s conduct over the covid crisis which ought to take evidence from all key players under oath and have access to documents. Issues concerning covid and/or the PM’s conduct should not be handled as No10 has handled them over the past 24 hours. I will cooperate fully with any such inquiry and am happy to give evidence under oath. I am happy for No10 to publish every email I received and sent July 2019-November 2020 (with no exceptions other than, obviously, some national security / intelligence issues).

It is sad to see the PM and his office fall so far below the standards of competence and integrity the country deserves.

I will not engage in media briefing regarding these issues but will answer questions about any of these issues to Parliament on 26 May for as long as the MPs want.

He said Mr Case told the PM ‘all the evidence definitely leads to’ senior No 10 adviser Henry Newman, a close friend of Miss Symonds and senior minister Michael Gove.

But a senior Government source said this claim was ‘entirely false’ and said Mr Newman ‘wouldn’t be working in Downing Street if he was suspected of leaking information’.

Denying leaking information about Johnson’s flat refurbishment, Cummings said the PM had ‘stopped talking to me about this matter’ while still in Government because of his opposition to the idea of trying to fund it via a charitable trust.

Cummings said he was happy to co-operate with any Electoral Commission inquiry but claimed he would not answer ‘every allegation’ made about his conduct.

In his blog post, he concluded: ‘It is sad to see the PM and his office fall so far below the standards of competence and integrity the country deserves.’

Cummings could make even more bombshell allegations when he appears before a parliamentary inquiry into the coronavirus crisis on May 26, claiming he would answer questions ‘for as long as MPs want’.