People have been urged to avoid the roads today after cars were left submerged amid heavy rainfall.

Villages were cut off and trains cancelled in the overnight floods.

Roads, such as the M23 between Crawley and Peasepottage, remain shut this morning and train services may be cancelled or delayed.

The Piccadilly line in London is part suspended due to ‘difficult rail conditions caused by significant leaf fall.’

People were rescued from Plumpton, East Sussex, after the village and railway line was ‘going underwater’ due to the downpours.

Chris Date, thanking British Transport Police for their help, wrote on Twitter: ‘Everything cancelled due to flooding, no buses and middle of countryside. Got to Haywards Heath at 2330 and it’s manic.’

Meanwhile in West Sussex, the A27 was closed in both directions between Emsworth and Chichester.

Near to 20 cars were left stuck in deep flood water, according to West Sussex Fire and Rescue Service. 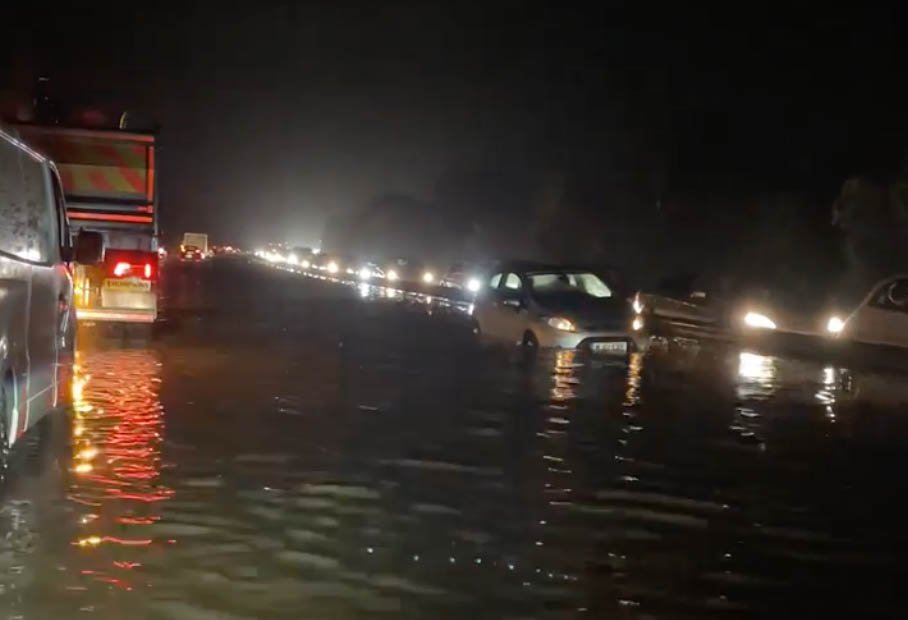 West Sussex Fire and Rescue Service posted on Twitter: ‘A27 CLOSED both ways from Fishbourne, Chichester to Havant Around 20 cars stuck in flood water.

‘Police on the scene and the road closed in both directions. We are attending with specialist equipment to help bring people to safety. AVOID THE AREA and only travel if necessary.’

Trains across the south were disrupted due to the downpours, on lines such as London Victoria to Southampton and routes in and around Brighton.

Meanwhile motorists were being warned by travel service Romanse of heavy delays around the A27 and A3M near Havant, Hampshire, because of flooding caused by the rain.

Police in Winchester, Hampshire, also said a large tree coming down and blocking a road in Swanmore.

Meanwhile, the Environment Agency has issued three flood warnings and 43 flood alerts, mostly across the south coast, as of Wednesday afternoon.

The UK is set to suffer ‘miserable conditions’ over the next two days.

Conditions are expected to be ‘atrocious’ for large swathes of the country.

Forecasters warned roads, homes and businesses could be flooded and transport services disrupted.

This covers an area stretching from Birmingham, Lincoln and Hull to north Wales, Liverpool and Manchester, as well as the east coast up to the Scottish border.

A third warning will come into force at 3pm on Thursday until 6pm on Friday for the east coast of Scotland, stretching from the English border up past Aberdeen with similar risks of flooding, and transport disruptions.

Met Office spokesperson Craig Snell said: ‘The warning areas are where we are most concerned about the risk of flooding but it doesn’t mean that the areas outside them are not going to see some pretty atrocious conditions.’

Mr Snell said a warning is in place for the southeast because ‘it has been quite wet there since the beginning of November with many places already seeing more than their month’s share of rain’.

‘The chances of being involved in a collision rise dramatically in wet weather, and even more so if there’s snow, so it’s vital drivers slow down, leave plenty of space behind the vehicle in front and use their lights to make sure they’re easily seen by other road users,’ he said.

‘The risk of aquaplaning where a vehicle’s wheels lose contact with the road as they skim across standing water will be high, particularly for those who don’t slow down to appropriate speeds for the conditions.’