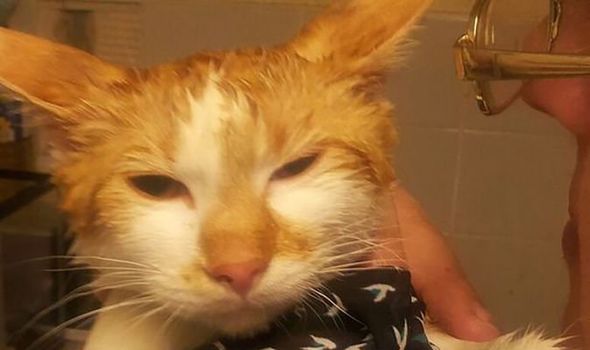 Katy Hallows had to have family pet Oscar put down after he suffered a “blunt force trauma” and his intestines went into his stomach. Katy found the 11-year-old puss struggling to stand up outside their home in Leigh, Greater Manchester, on Friday July 2.

She dashed him to the vets and, on the way, received a call from her partner, who told her that their other cat, a black cat who was pregnant at the time, had almost been hit by two children.

Vets assessed Oscar but the decision was taken for the cat to be put down there on Friday night.

Speaking to Manchester Evening News, heartbroken Katy said: “My partner caught two young lads in school uniforms trying to hit my other cat with a white stick which turned out to be a metal pole.

“We had seen them earlier when we got home but we hadn’t put two and two together at the time.

“As he saw them trying to attack our other cat, he shouted ‘I don’t think so’ at them and they quickly ran off.”

He’s one of those cats that if you went up to him in his own garden, he’d run off – he wouldn’t hurt a fly

Police are investigating the attack on Oscar, who was left with a huge wound on his back.

Vets even found a horseshoe shape indented into his skin.

Katy, who has young children, said: “We got him seen to and the vet confirmed he had been hit with a metal pole because she was able to see a horseshoe shape indented into him.

“They hit him with such force that it had split his stomach lining and his intestines went into his stomach.

“There was nothing they could do because he was in so much pain.

“He’s one of those cats that if you went up to him in his own garden, he’d run off – he wouldn’t hurt a fly.”

The family had Oscar, who they dubbed the ginger ninja, since he was just six weeks old.

Katy’s youngest child, who is just six, has been particularly affected by the death.

Katy added: “He was really close to him because they’d always cuddle. He’d always demand his attention and made him get off his computer to play with him.

“It has really knocked him for six. He’s been in his room since it happened, he’s very, very quiet.

“We always called Oscar the ginger ninja because he’d always hide and then jump out at you.”

Katy says their other cat has since given birth to five kittens, which has been a welcome distraction for the family.

She says she now hopes whoever was involved will come forward.

“It’s very hard knowing that it’s children that have done this,” she said.

“I’m not one for blaming the parents, my children have got into scrapes and trouble in the past, but I hope that if the parents do find out it’s their children, they will come and talk to me.

“It’s not that I want them to pay for the vet bills or anything but I would appreciate some acknowledgement and understanding of just how destructive this has been for us.

“It might not just be our cats that are being targeted either – they might just be doing it to any cats in the area and that’s a big concern.”

Greater Manchester Police said they were called to reports of animal cruelty on Abbey Lane in Leigh.

Witnesses described seeing a cat being attacked by children in a nearby field.

The incident is being investigated and no arrests have been made at this time.

Inspector Andy Smith, of Greater Manchester Police’s Wigan district, said: “I am sure that pet owners will be distressed and appalled by this incident. We are keen to establish the circumstances of what happened and to identify those responsible.

“If anyone in the local area has witnessed anything that might assist in our enquiries, please let us know by contacting us.”