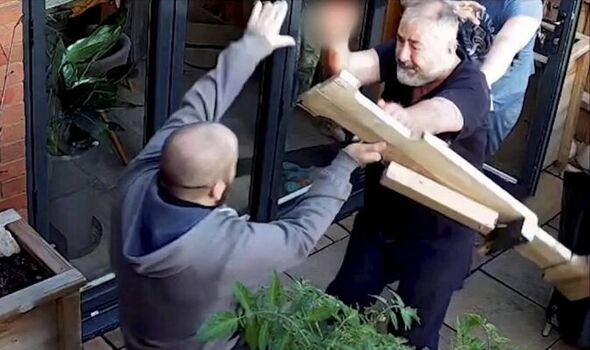 A policeman and other neighbour are also seen in the footage trying to stop the onslaught.

Can Arslan, 52, is on trial for murdering Matthew Boorman, who was stabbed 27 times on his front lawn. Bristol Crown Court heard Arslan was fuelled by “anger and revenge” against villagers who had been trying to evict him for years for his anti-social behaviour.

Despite his own repeated warnings to police he would act, Arslan is alleged to have carried out the attack on October 5 last year. The court heard he fatally wounded Mr Boorman, 43, and then stabbed his wife

Sarah Boorman in the leg as she tried to save him. CCTV showed Arslan sitting on the lifeless body of Mr Boorman and lighting a cigarette. The court heard he then stabbed another neighbour – Peter Marsden – eight times in his kitchen.

Mr Marsden told the jury: “He had such a hatred look. I forced him out. I saw this bloke swing a plank that caught Mr Arslan on the back or the back of his head.”

The victim suffered six stab wounds to his abdomen and two in his shoulders, requiring surgery on his bowel and an artery. The court heard Arslan had another neighbour in his sights in Walton Cardiff, near Tewkesbury,

Gloucs. But it was claimed he was stopped by have-a-go heroes who cornered him. One was offduty policeman Steve Wilkinson, seen wielding wood in the video.

Arslan was tasered by police and arrested. He told officers: “I told police I was going to murder him. I killed 50 people in the Kurdish army.”

In court PC Gregory Jones said Arslan had vowed he would murder a neighbour in an earlier interview. The officer put that data in the system and it went live at 3.40pm the next day – less than two hours before the spree.

Sarah Boorman had also told police “someone is going to be badly hurt very soon”. She added: “He threatened to rape me and to murder me and my husband many times.”

Arslan admits attempted murder, GBH with intent and affray but denies murder on the grounds of diminished responsibility. The trial continues.