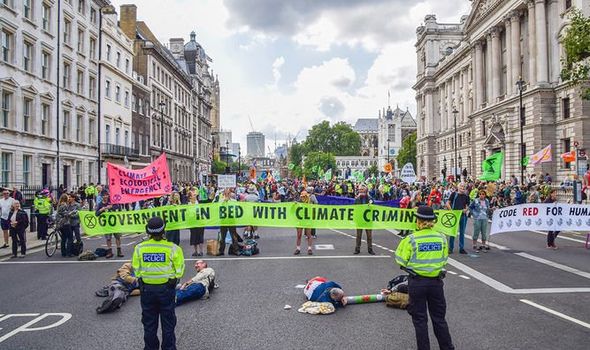 Climate change activists sat in the middle of the road some with their arms locked inside oil barrels.

The focus of the demo was Her Majesty’s Revenue and Customs building close to Downing Street and Parliament.

They were protesting at HMRC’s links to Barclays Europe which XR has described as a big financier of fossil fuels.

Met Police said 40 people had been arrested. The total number of arrests over the three days of activity by the protest group stood at 102, also including 10 on Sunday and 52 on Monday.

Women were seen being carried onto the pavement by officers.

Protesters also drove a van into the middle of the theatre district and locked themselves to it.

Scotland Yard said: “Some people have once again used complicated lock-on devices, adding to the unreasonable nature of this disruption.”

Yesterday’s protest was the second day of two weeks of action aimed at causing massive disruption to London.

XR halted traffic around Trafalgar Square on Monday after erecting a 13ft high pink table in the middle of the road. Activists spent the night chained to it before it was removed yesterday.

Last week, the Yard revealed XR protests in 2019 and last year cost £50million to police. They resulted in 3,762 arrests and 1,938 prosecutions.

On the climate crisis, the things that our Government says and the things that it does are very far apart. Too far apart for it to be tolerable by anybody who understands the risks we face.

We have decent zero carbon targets and world-leading rhetoric.

However, a new coal mine is being opened and there is further exploration for North Sea oil and gas that we can’t afford to burn.

Set against that our budgets for fighting the climate crisis are tiny and meaningless.

It makes no sense.

We know we have to avoid the worst of climate change, we know that it’s more economic to do so than to not do so.

We have the technology, we know what to do.

And we’ve seen what 1.5C of warming looks like this year. There has been catastrophic global weather with floods, droughts and wild fires, plus hundreds of thousands of deaths and millions displaced.

The future for our grandkids will be bleak.

We can’t allow the status quo to continue. The business practices that are legal today should not be and sometimes the only way to bring about systemic change is to protest.

Dale Vince is a green entrepreneur