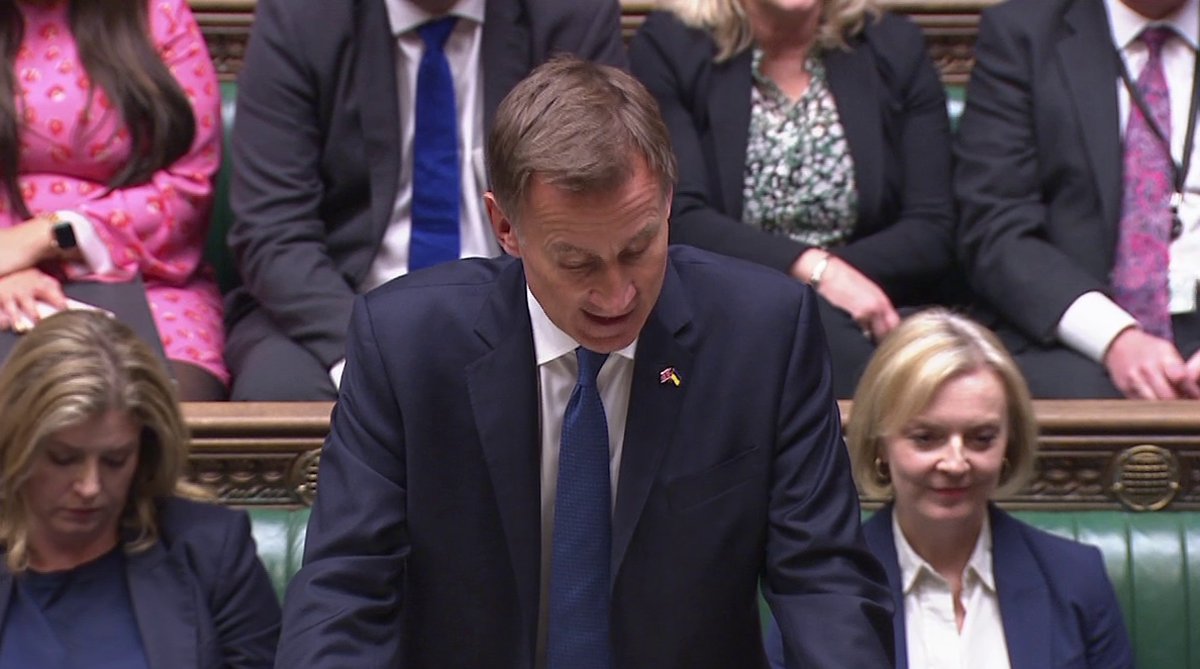 Chancellor Jeremy Hunt has spoken to members of the House of Commons after his dramatic mini-Budget reversal this morning.

The Chancellor gave a statement to MPs speaking about the changes he plans to make as he starts his third day in office.

He said ‘decisions of eye-watering difficulty’ will have to be made by himself and the Prime Minister.

He told the Commons: ‘We are a country that funds our promises and pays our debts.
‘And when that is questioned, as it has been, this Government will take the difficult decisions necessary to ensure there is trust and confidence in our national finances.’

He added: ‘That means decisions of eye-watering difficulty.

‘But I give the House and the public this assurance, every single one of those decisions, whether reductions in spending or increases in tax, will be shaped through core compassionate Conservative values that… prioritise the needs of the most vulnerable.’

Before he spoke Tory MP Penny Morduant was immediately met with a huge roar of laughter from the opposite benches after saying Liz Truss was ‘detained on urgent business’.

The Prime Minister was accused of ‘running scared’ after failing to show up for Keir Starmer’s urgent question on her troubled financial plans.

In her place, she sent Ms Mordaunt, who told MPs: ‘With apologies to the Leader of the Opposition and the House, the PM is detained on urgent business… and I’m afraid you’ll have to make do with me.’

It comes after just this morning he ripped up Liz Truss’ tax measures and announced a shock U-turn on energy bill support.

He unveiled part of his plan to stabilise Britain’s finances in a last-minute emergency statement this morning.

Help with energy bills for all households will only last until April, rather than the two years previously promised.

A review to look at a ‘new approach’ to target support at those worst off will take place after that.

He also confirmed he is ditching many of the measures in the mini-budget, including the planned cut to income tax – which will remain at 20p indefinitely ‘until circumstances allow’.

He said: ‘We will reverse almost all the tax measures announced in the growth plan three weeks ago that have not started parliamentary legislation,’

‘So whilst we will continue with the abolition of the health and social care levy and stamp duty changes, we will no longer be proceeding with the cuts to dividend tax rates, the reversal of off-payroll working reforms introduced in 2017 and 2021, the new VAT-free shopping scheme for non-UK visitors or the freeze on alcohol duty rates.’

Mr Hunt has said his tax cut reversals will raise some £32 billion a year and the government’s main objective will be ensuring ‘stability’.

One measure from the mini budget that has survived is abolishing the cap on bankers’ bonuses.

He and Prime Minister Liz Truss held talks over the weekend on what the Treasury described as measures ‘to ensure sustainable public finances underpin economic growth’.

His speech follows his surprise appointment on Friday and is an attempt to calm the markets following Liz Truss and Kwasi Kwarteng’s disastrous mini-budget.

The full medium term fiscal plan will be published on October 31 – but the terrible start to the prime minister’s premiership has raised speculation how long this government could last.

Former chancellor Mr Kwarteng was sacked just 38 days after his appointment when his £45 billion package of unfunded tax cuts triggered a market meltdown.

Some Tory MPs are already in open revolt, calling for Ms Truss to immediately step aside.

Scheming MPs want to swap her for a ‘dream ticket’ of leadership rivals Rishi Sunak and Penny Mordaunt.

But some are calling for defence secretary Ben Wallace to take the role in a second scheme – and in a third plot, others think new chancellor Jeremy Hunt is poised for the top job.

Meanwhile, three Tory MPs have also called on Liz Truss to quit as pressure grows on the prime minister.

MP’s Crispin Blunt, Jamie Wallis and Andrew Bridgen have all said the PM should step down, after her disastrous first weeks in government.

Crispin Blunt, MP for Reigate, told Channel 4’s Andrew Neil Show: ‘I think the game is up and it’s now a question as to how the succession is managed.’

He was followed by Andrew Bridgen on Sunday evening, who told the Telegraph: ‘We cannot carry on like this.’

Mr Bridgen, who backed Rishi Sunak in the leadership contest over the summer, said: ‘Our country, its people and our party deserve better.’