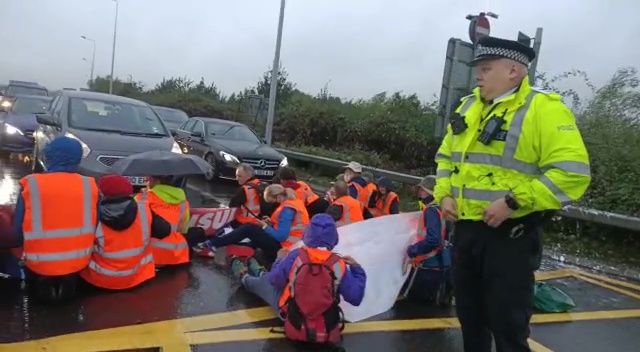 Environmental campaigners have defied a court order and are blocking the M25 close to Heathrow Airport.

Insulate Britain has caused widespread disruption in the last two weeks by repeatedly occupying busy routes, including at the Port of Dover.

A video showed more than 50 campaigners sitting in the road at the top of the junction and police officers already on the scene.

The group is demanding the government insulate homes in Britain to tackle climate change and fuel poverty.

But the group is once again on the road, with long queues expected outside the UK biggest airport.

Insulate Britain spokesperson Liam Norton said: ‘You can throw as many injunctions at us as you like, but we are going nowhere.

‘You can raid our savings and confiscate our property. You can deny us our liberty and put us behind bars.

‘But that is only shooting the messenger. The truth is that this country is going to hell unless you take emergency action to stop putting carbon into the air.’

The activists – who are also banned from protesting on the A20 – could be found in contempt of court for flouting the court order, an offence which carries a sentence of up to two years.

On Friday, transport secretary Grant Shapps said: ‘We are absolutely committed to protecting the right to peaceful protest, but it is unacceptable that people cannot go about their day-to-day businesses and that businesses or critical supplies should be put on a knife’s edge because of the reckless actions of a few protesters.’

Insulate Britain has threatened to continue with the controversial protests unless the government commits to policy of future-proofing homes.

Its activists call it ‘pound for pound’ the best way to tackle climate change, as well as help families in need.