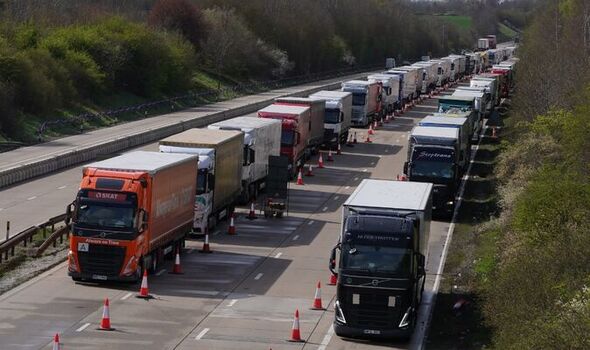 In an update Kent County Council said the coastbound M20 at J8-J9 is being closed due to Operation Brock filling up and to avoid congestion on the route. Traffic management and speed restrictions due to the operation means traffic is very slow moving around Folkestone and Dover.

Traffic cameras have shown traffic queueing between J11 and J13 on the M20 due to A20 Roundhill Tunnel being closed.

Operation Brock is the official name for traffic calming measures when there is cross-Channel disruption at the Port of Dover or Eurotunnel.

It employs a contraflow system on the London-bound carriageway of the M20 between J8 and J9.

Lorries heading to the Port or Tunnel is sent down the coastbound carriageway with a 30mph speed limit in place. All other traffic uses the contraflow.

The M20, A20, and A2 have been affected at the Port of Dover due to reduced ferry movement at the Eastern Docks, according to KentLive.

This is due to P&O Ferries not operating with its vessels undergoing safety reviews. It is not known when they will be reinstated.

Kent Traffic Information is reporting that traffic is being diverted from M20 J8 via the A20 to re-join the M20 at J9.

Cross Channel freight traffic is being diverted off the M20 at the J8 exit slip and directed back on by police to join the Brock system.

It is warning of long delays on the approach and has urged motorists to allow extra time for their journeys and to expect delays in the surrounding area.

The chaos comes after severe delays and congestion on routes to Dover from Friday and over the weekend, leading to a backlog of Dover-bound freight traffic.

It added that the Operation Brock barrier was in place as a precautionary measure ahead of the Easter holiday getaway period and while P&O ferry services were out of service.

“Once you close the motorway, it makes it impossible so the Kent Resilience Forum needs to look at what changes need to happen so Brock can cope with what is a very unusual situation where more than half of the freight carrying capacity at Dover has disappeared in one time.

“At times over the past week we have been plunged back into the worst days of Operation Stack, with the M20 closed completely between Junctions 8 and 9.”