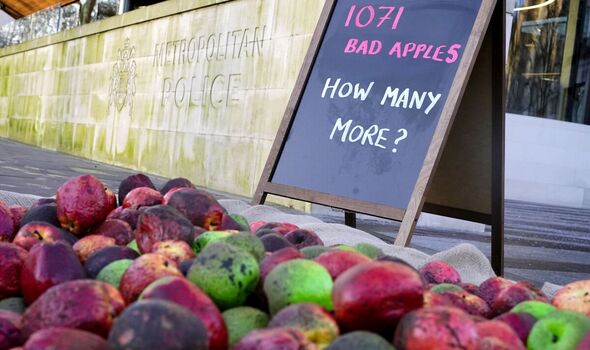 Domestic abuse charity Refuge left 1,071 apples, representing the Met officers and staff who have been or are under investigation for abuse or violence against females. It follows Met PC David Carrick admitting 71 serious sex offences against women, including 24 counts of rape.

Refuge’s chief executive Ruth Davison said: “This is not one bad apple – this is a systemic problem across policing. How have these perpetrators of abuse been allowed to enter and remain in positions of power for so long?

“Unless radical change to the way the policing system works across the country happens immediately, then women and girls will remain unsafe and they will not have the confidence to come forward and report the violent crimes committed against them.”

Carrick will be sentenced next month. Another Met PC, Wayne Couzens, used handcuffs to kidnap, rape and murder Sarah Everard, 33, in March 2021. He was given a whole-life jail term.

The force said then: “We recognise this is part of a much bigger and troubling picture.”

Victim tells of trauma at hands of evil Carrick

A courageous woman has spoken out about her ordeal as David Carrick’s sex slave.

The victim told how the Metropolitan Police officer would handcuff her, whip her with a chain and abuse her.

Emma, as she asked to be called, was also locked away in a cupboard under the stairs.

In an interview, she said: “He broke me. Never in my life have I felt so isolated and alone. I was not allowed to see family or friends. I was told consistently I was a whore and a slut.”

Carrick faces multiple life sentences after admitting 43 offences against women. Emma said she met Carrick in 2017 during a night out with pals and he told her “I’m gonna marry you, one day”.

But the relationship quickly turned violent.

She said: “I was ridiculed, teased and shamed. I was told what to wear, what I could eat and what amounts. I was instructed to walk behind, not beside or in front.

“I was whipped, urinated on and locked naked in a cupboard. At times, I was made to sleep naked on the floor.

“My chest was sat on; I was strangled, kicked, threatened…

“I was told I was worthless and would be better off dead.”

But Emma said: “I hope one day I will really be able to forgive him, but it will take a long time.”