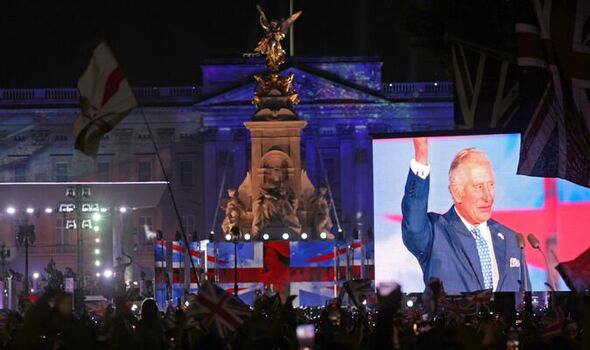 The future King looked emotional as he paid a moving, personal tribute to the Queen at the Jubilee Party at the Palace, calling her “Mummy” and thanking her for being there for the nation in good times and bad for 70 years. He smiled widely as they touched on Her Majesty’s groundbreaking reign, her legacy and unwavering sense of duty.

The 73-year-old also paid a touching tribute to his late father, Prince Philip, describing him as the Queen’s “strength and stay”.

In a touching moment, Charles spoke of his “much missed” late father, calling him “My Papa” and saying the Queen’s late husband Philip was there “in spirit”.

As images of the Queen’s reign were displayed onto the walls, Charles, 73, said the Jubilee had given the country the chance to say thank you.

The heir to throne Charles, taking to the stage in front of Buckingham Palace, told how the Queen had laughed and cried along with the country through the decades, as he hailed her “lifetime of selfless service”.

The future king, who was joined by his wife the Duchess of Cornwall, said, addressing the absent monarch, who remains head of state at the age of 96 despite her mobility problems: “You pledged to serve your whole life – you continue to deliver.”

The prince, who began his heartfelt speech with “Your Majesty, Mummy” just as he did at the Diamond and Golden Jubilee pop concerts, told the Queen: “You have been with us in our difficult times.

“And you bring us together to celebrate moments of pride, joy and happiness.”

“You have met us and talked with us. You laugh and cry with us and, most importantly, you have been there for us, for these 70 years. You pledged to serve your whole life, you continue to deliver. That is why we are here.”

Speaking to the crowd at Saturday’s show, Charles praised his mother and acknowledged another absentee – his father, Prince Philip, who died last year aged 99.

Charles told the crowd of 22,000 people, with millions more watching on television: “My papa would have enjoyed the show and joined us wholeheartedly in celebrating all you continue to do for your country and your people.

“You continue to make history.”

The grounds of Buckingham Palace filled with cheering and applause as the Prince of Wales finished his address live from Party at the Palace.

Charles asked the crowd to cheer loudly enough for the Queen to hear 20 miles away in Windsor.

Queen guitarist Brian May, whose legendary group opened the night of celebrations, recalled being invited to play also to the Golden Jubilee concert.

He said ahead of tonight’s performance: “Twenty years after playing The Queen’s glorious Golden Jubilee we’re very happy to be invited again.

“Then there was a moment when I wondered…after Buckingham Palace roof where can you go? Well…you will see!”

Soul star Ross spoke with awe about the Queen while recalling their past meetings.

She said ahead of the concert: “I have had the honour of meeting The Queen many times throughout my life, including when I was with my family.

“Her Majesty has and continues to be such an incredible inspiration to so many across the world and I was absolutely delighted to receive an invitation to perform on such a momentous and historic occasion.”

The stage didn’t only host musicians, as an array of public figures have been invited to pay their tribute to the Queen.

The concert came on the third day of celebrations for the Queen’s historic Jubilee.

On Thursday, she was in London to watch in person the RAF flypast on the Buckingham Palace balcony.

She later returned to Windsor Castle, from which she led the lightening of the beacons across the country.

On Friday, she pulled out of the service of Thanksgiving at St Paul’s Cathedral after experiencing “some discomfort” on the day before.

Today, she watched the Epsom Derby from her residence.

On Sunday, the final day of celebrations, the Queen has been tipped to travel back to London to watch in person the Platinum Pageant taking to the streets of London.

And, it has been claimed, she has planned another balcony appearance, this time surrounded only by her direct heirs Prince William, Prince Charles and Prince George.