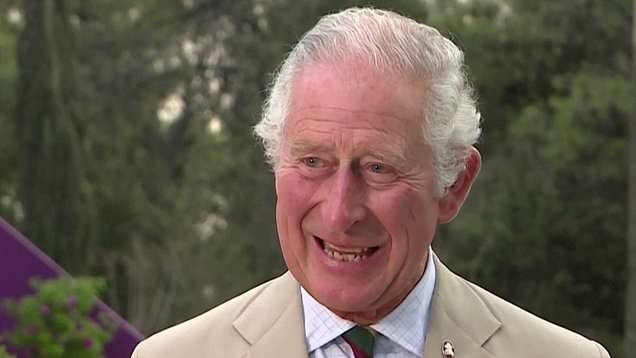 Prince Charles has said the Queen is ‘alright’ but admitted ‘it’s not quite as easy as it used to be’ for his 95-year-old mother.

The Queen, who is resting for nearly a month under doctors’ orders, carried out her first official engagement since missing the Remembrance service on Sunday.

She was pictured standing without her walking stick as she greeted the outgoing armed forces chief General Sir Nick Carter at Windsor Castle.

During his tour of Jordan today, Charles spoke publicly about his mother’s health after she sprained her back.

When asked by a journalist to send their best wishes to the Queen, the prince replied: ‘She’s alright, thank you very much.

The Queen’s latest injury sparked concerns over the impact of car journeys and longer periods of standing.

It followed another health scare last month, which saw the Queen staying in hospital overnight for the first time in eight years, forcing the cancellation of two trips.

Dressed in a green, orange and white floral dress and wearing her three-string pearl necklace, the Queen smiled and shook hands with Gen Sir Nick as they began chatting.

He told the Queen he had been in the post for eight years, with the Queen remarking it was ‘rather sad’ he was leaving, adding: ‘It’s a long time.’

Gen Sir Nick discussed the Duke of Edinburgh’s late uncle, saying: ‘It is a long time. In fact, the only person who has done longer I’m told is Lord Mountbatten… so I am quite surprised by all that.’

She added: ‘I suppose if you get into that job, you know, it is easier to continue, isn’t it really?’

Gen Sir Nick said: ‘I think that’s right. Although I have to say I think the time comes when it’s ready to move on.’

Elizabeth II has remained on the throne for more than 69 years, pledging her whole life to royal service.

She is set to reach her Platinum Jubilee next year, having become Queen on February 6 1952 when she was just 25 years old.