British people think police have 'given up' says Neville

Nick Adderley, of Northamptonshire Police, said he would be “bordering on neglectful” if he had not handed the life-saving equipment to his team. An alarming rise in street violence has seen the thin blue line brutally exposed as forces respond to increasingly complex problems.

Despite facing deadly threats every day, some experts argue there is no need to issue frontline men and women with the weapons.

Taser is able to temporarily disable a suspect at distance and has saved countless lives. Yet it is thought only a fraction of officers policing the UK’s streets carry one.

Mr Adderley said: “Issuing Taser to every frontline officer wasn’t a decision I took lightly. I am pleased to see others have followed.

“It is right the use of this device is scrutinised, and it is absolutely right officers must be held to account for the use of it.

“But it is an absolute right for a police officer to expect to be provided with the right kit and equipment which allows them to do the job they joined to do and to go home safely to their loved ones at the end of every shift.” 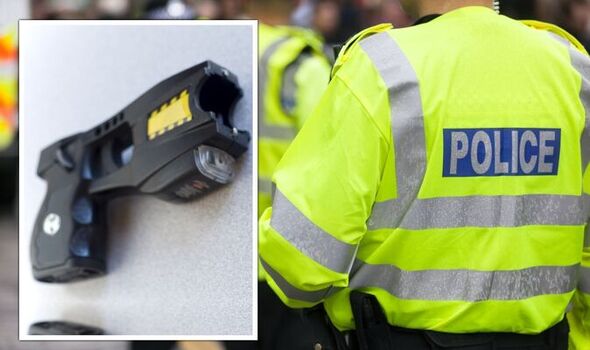 The Manchester-born father of two made the call after being left sickened at the rise in violence against the men and women who serve under his command.

His decision came after a string of horrific incidents – and one in particular that left him with deep psychological scars.

Mr Adderley was the commander in Tameside, Greater Manchester, when constables Nicola Hughes and Fiona Bone were shot dead by career criminal Dale Cregan in 2012.

The drug dealer had made a hoax emergency call claiming to have witnessed a domestic burglary.

Unarmed Hughes, 23, and Bone, 32, were sent to investigate. But when they arrived Cregan ambushed the officers, shooting and throwing a grenade at them. Both were hit by at least eight bullets as Cregan fired 32 shots in as many seconds.

Cregan later turned himself in, admitting to killing Hughes and Bone in a revenge attack, claiming police were victimising his family. He was sentenced to life imprisonment with a whole life order in 2013.

Mr Adderley said: “I was aware Northamptonshire would be the first force in the country to do this and it would draw mixed commentary and views from across the world of policing and beyond, something I was ready for and quite prepared to justify.

“I will never shy away from difficult decisions, controversial conversations or debates if it means never again will the relative or loved one of an officer hear a thud on the door at 4am, look out of the window, see a patrol car and know the next few minutes are going to change their lives forever.

“What sort of chief constable would I be if I didn’t do all in my power to protect the men and women I ask to keep our streets safe? I want them to have the confidence to go after the baddest people causing the most misery and get the job done, professionally and safely. Taser will help them do that.”

But the use of Taser is a matter for individual forces, meaning the majority of officers do not carry them because of the cost.

Figures suggest there are only around 31,000 Taser-trained police in Britain – less than one fifth of the total workforce of about 160,000.

Northamptonshire has now issued electroshock guns to some 328 officers.

In the past five years, three officers in the UK have been killed on duty. PC Keith Palmer, 48, died stopping a knife-wielding terrorist during the 2017 Westminster attack.

Thames Valley PC Andrew Harper, 28, was killed after being dragged behind a vehicle he had stopped in 2019. And in nd 2020 New Zealand-born sergeant Matt Ratana, 54, was shot dead in a custody centre in Croydon, south London.

Home Secretary Priti Patel has now authorised its use by volunteer Special Constables.

The Home Office said: “We are committed to giving the police the necessary tools to do their job effectively. Taser provides officers with an important tactical option when facing potentially violent situations.”

The Police Federation of England and Wales said it was “highly supportive of officers on the frontline being equipped with Taser”.

It said: “We have also pushed for this opportunity for Specials for a number of years, as they face the same risks and dangers as regular officers.

“We do believe that officers need a greater focus on training and increased contact training time in all areas of officer safety and equipment, including Taser. This should be a priority for forces.”

The decision to issue Taser to every frontline officer in Northamptonshire Police was a controversial one.

Of course, this was to be fully expected particularly from human rights and liberty campaigners, who rightly would express concern and worry regarding the indiscriminate use of the device and the potential health and injury which may follow.

In 2019, when I made this decision, evidence already existed regarding the impact and effect of the device and several comprehensive studies had been completed both here in the UK and in the US.

Having researched the device myself I was convinced this was a piece of equipment that every frontline officer should carry, both for self-protection and the protection of the public.

In fact, I genuinely believed it was bordering on neglectful not to issue this life-saving equipment to officers, who often find themselves outnumbered and with all the odds stacked against them. In other words, police officers must abide by the rules, criminals do not.

Three years on, and with many other forces now following suit, I know this was the right decision. I see and hear of examples every day where officers’ lives have been saved – as have those of members of the public – by the use and deployment of Taser.

Last year I had the privilege of attending the National Police Bravery Awards for 2020 (delayed due to Covid).

I sat in awe as I listened to the acts of bravery and heroism carried out by officers across the country. Many said they believed their lives were on the line and feared they would never see their loved ones again.

Yet what stood out for me were the many examples of how Taser had saved them, incapacitating the offender in a way that pepper spray or a baton could not.

Recently in Northamptonshire, officers have discharged Taser three times where members of the public – suffering with severe mental health issues – have cut their wrist, stabbed themselves in the stomach and one who cut their throat in front of officers, once all negotiations failed.

All three members of the public survived thanks to the actions of the officers and use of Taser.

And all officers went home safely to their families.

Issuing Taser to every frontline officer across Northamptonshire Police wasn’t a decision I took lightly, but was it the right decision which I am pleased to see others have followed.

It is right the use of this device is scrutinised and it is right officers must be held to account for the use of it, but it is an absolute right for an officer to expect to have the right kit and equipment which allows them to do the job they joined to do and to go home safely to loved ones.