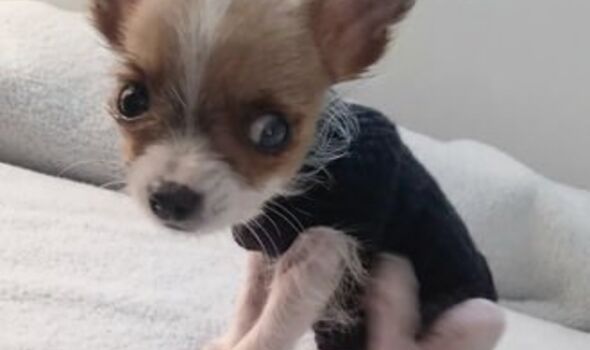 RSPCA's story of Daisy as part of Cancel Out Cruelty campaign

A five-week-old chihuahua puppy narrowly cheated death after she was found stuffed into a black bin bag and dumped in a bin.

Weighing less than a loaf of bread, little Minnie was found malnourished and covered in sores by a passer-by in September in London.

Rescuers revealed the tiny puppy was “in a great deal of pain” with part of her tail missing and fur loss, worms and a punctured eye with an infected ulcer.

Minnie was taken to a vet in Feltham who liaised with animal rescue charity Dizzy Chihuahua Rescue who took her in for intensive care alongside their vets in Chelsea, My London reports.

Suzanne Callan, from Dizzy Chihuahua Rescue, said vets had started treatment on the 700g puppy’s eye, but warned she might still have to have her eye removed if the ulcer bursts.

Suzanne said: “I think this is probably a case of backstreet breeders, they’ve bred the puppies to sell to get money for, and because she’s in such bad condition she’s just been dumped, because they can’t sell her and obviously they wouldn’t take her to a vet.

“They don’t bother getting treatment for them, once they’ve served their purpose they just dump them and get rid of them.”

Suzanne said over-breeding is a “huge problem,” with countless breeders operating illegally across London, “unconcerned about the mothers or the puppies’ health and wellbeing.”

The dog rescuer said free advertising sites are heaving with Chihuahua puppies, “and the only reason to breed is purely for profit.”

Describing Minnie as the “tiniest, sweetest little dog,” Suzanne described how relieved she was to have found the puppy “before it was too late.”

She said the “tiny mite will need regular vet’s visits and treatment, lots of loving care and time to heal before she will be ready for her new forever home”.

The incident comes as animal rescue centres across London are overflowing due to the cost of living crisis.

Suzanne said: “So many people are giving their dogs up because they can’t afford to keep them. The rescues I know are just at breaking point, they’re just at full capacity.”

DON’T MISS: Rescue dog returned for being too clingy looking for new home