A young girl has survived after falling down a 100ft (30m) waterfall and being pulled to safety by members of the public.

Emergency services were called to Ceunant Mawr Waterfall in Llanberis, a tourist attraction in Snowdonia, after the girl was washed into a pool below on Sunday.

Bystanders sprang into action, including a man who braved the cold water and helped drag her out.

A member of the Llanberis Mountain Rescue Team also witnessed the incident and alerted colleagues. 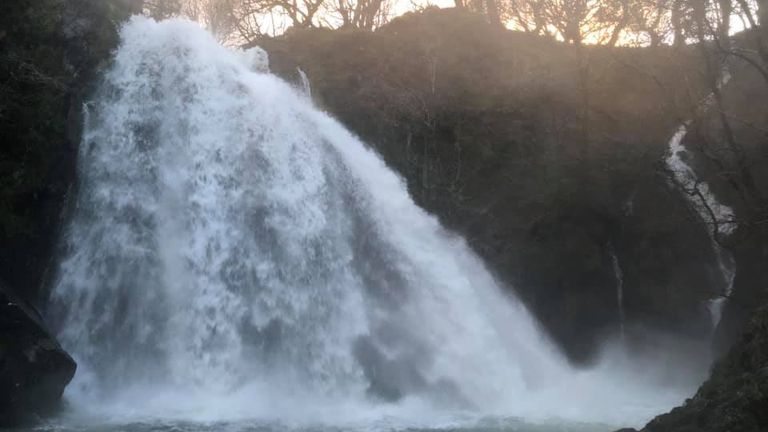 The child, believed to be six, was found floating at the foot of the falls by a local who pulled her out with help from other members of the public.

Demilea Lloyd was visiting from Liverpool when she became involved in the rescue.

She told Sky News: “I jumped in at the bottom when I saw her floating – I was in a state of panic and I didn’t know what to do.

“I still had my shoes on so I couldn’t get to her and it was very deep, and as I hit the water I got a sharp pain in my side.

“There was another man there and he was brave enough to dive right into the middle of it all and he dragged the little girl to safety.

“My dad helped carry her out and my mum tried to keep her warm and tried to comfort the little girl.

“The mountain rescue team where incredible, their service was so fast, they are amazing at their jobs.”

A mountain rescue spokesperson said: “While beautiful, Llanberis waterfall has been the scene of several fatalities and very near misses. This incident was a genuine accident, these things happen occasionally and there is no blame to be apportioned.

“That said, we continue to dissuade anybody from swimming in the pools below the falls.

“The Good Samaritan who entered the bottom pool was a very strong swimmer and used to cold water, they did however, experience the effects of cold water shock with a noticeable reduction in muscle power.”

Members of the mountain rescue team, including two doctors, helped the Welsh Ambulance Service treat the girl at the scene before she was taken to hospital.