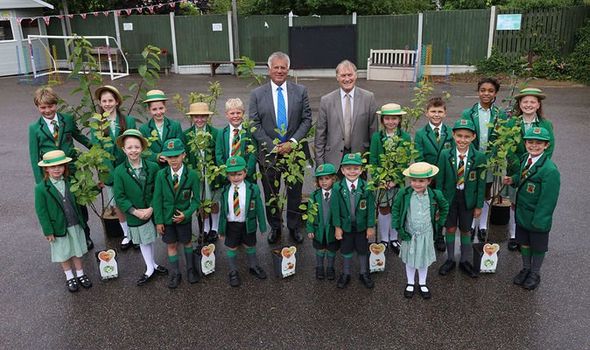 The virtual parliamentary session will be held in a House of Commons style “chamber”, with half of the children representing Her Majesty’s Government and the other Her Majesty’s Loyal Opposition. They will debate and vote on the environmental issues that matter to them – alongside COVID-19 and technology.

The project, named This House Matters, is being seen as critical to teach children about the value of democracy.

Teachers can register their Child MPs by going to www.wakelet.com/@childrensparliament

Their Parliamentary champion is Sir David Amess, MP, who was just a young boy when he first became interested in politics, has made sure the debate can go ahead in the House of Commons and House of Lords.

He said: “I want to inspire children right across the United Kingdom to get involved in the political process from an early age.

“I started out in politics at school at the age of 11 in mock elections at St Bonaventure’s in Forest Gate, which took place in 1964 and 1966.

“In my opinion, the earlier young people get involved in politics the better.

“Especially in light of what’s happening in Afghanistan, it’s crucial the younger generations understand the importance of democracy.

“There’s no doubt our young people have opinions on the issues that matter to them.

“It’s important their views are noticed and given a platform for debate, not least so the youngsters themselves have the opportunity to listen to and learn from their peers.

“There’s been a great response from my colleagues in Parliament to the idea too.

“Each MP will have a junior MP in the debate from their constituency.

“The fact that this technology exists to allow a national debate without the children leaving their constituencies is amazing.”

Steven Abrahams, from Microsoft Teams, which is sponsoring the Parliament, said: “It’s important to give children a voice when it comes to their future, and we’re looking forward to hearing all of the things they have to say about these critical topics.”

The venture is also backed by the Daily Express – which launched the incredibly successful Green Britain crusade earlier this year – and British online educational platform Wakelet.

Chief executive of Wakelet Jamil Khalil said: “We’re proud to support such an incredible initiative to curate the views of young people nationwide. Technology played a big part in remote education over the last year, and it continues to enable the nation’s young people to share and collaborate on their ideas.”

Now headmaster of Saint Pierre School in Leigh on Sea, Essex, Mr Spencer-Lane makes sure pupils’ interest in the environment is bolstered by learning about how democracy in Britain can help them protect the planet.

He said: “A virtual youth parliament ahead of the COP26 Climate Change Conference is a powerful notion. These children hold our planet’s future in their hands, it is a responsibility they take very seriously.

“It would be a huge mistake to assume our children can’t contribute to a topic like climate change, which is so close to their hearts.

“Children of this age are passionate about the environment and are remarkably well informed.

“To give children across the country a voice in such a magnificent virtual arena is a unique opportunity, not just for them to speak, but for us to listen.”

Issues such as climate change and education form the pillars of the Future Generations Wellbeing Bill introduced into the House of Lords by Lord Bird and in the House of Commons by Green Party Leader, Caroline Lucas.

The 90-minute Microsoft Teams virtual “parliamentary” session will be held at 5pm on Friday October 29, 2021 in a House of Commons-style virtual “chamber”, with half of the children representing Her Majesty’s Loyal Opposition and the other half Her Majesty’s Government.

As a politician, it will hardly come as a surprise to readers when I say politics really does matter.

It’s so important and affects every aspect of our lives. I very much want to see people interested in politics, and not just when there happens to be something of personal concern to shout about.

The quality of any government is enhanced by the interest and involvement of all its citizens.Throughout my life, I have experienced periods of apathy from the general public, but that changed over the issue of Brexit and, more recently, the Government’s response to the pandemic.

My own journey into politics started at school, aged 11. I was at St Bonaventure’s in Forest Gate and took part in mock elections, first in 1964 and then in 1966.

Standing for The Revolutionary Party – which I invented myself – I experienced short-term popularity, mainly because one of my policies was to abolish homework.This experience whetted my appetite for political campaigning.

Enthusiasm aside, I am living proof, along with many of my colleagues, that you can fulfil your childhood ambitions regardless of a humble background, which mine certainly was.

In spite of that, I ended up on those green benches, and I have now been on them for nearly four decades.

I think it is so important that we get young people involved and interested in politics, and one way this can be done is through aVirtual Children’s Parliament.

In 2021, we have the unique opportunity to hear the thoughts and opinions of 650 Child MPs, as young as primary school age, who could log in and unite the nation. I have written to all my colleagues and am pleased to say that they are enthusiastic about this initiative.

An issue which seems to have struck a real chord with young people is what is often called the “climate emergency”.

Young people seem to understand more than most that if the people of the world continue their reckless behaviour, then all those things which we have taken for granted will be lost and our planet will ultimately become uninhabitable.

It has even been argued that the Covid pandemic we are living through is linked to our treatment of the environment.

In his wonderful programmes, Sir David Attenborough has warned us that our air is being polluted, habitats ruined, species wiped out, ice caps melted and the Amazon rainforest gradually destroyed.

These issues need to be debated in Parliament – the name for which comes from the French word “parler”, to speak.

We can all make a real difference and I very much want to encourage young people to get involved in this debate.

The 90-minuteVirtual Children’s Parliament will epicentre around the Cop26 Climate Change conference, but then touch on other issues including the Covid-19 response and technology

We as a nation must be able to reach our own conclusions and not be part of a one-size-fits-all global response.

What has always made Britain great has been its intelligent, independent thought.

The quality of our legislation depends on the election of women and men who have well-formed and passionate beliefs.

These are established at an early age, of course, and I cannot think of any better way of testing the quality of our young people’s debating skills than through a Virtual Children’s Parliament.