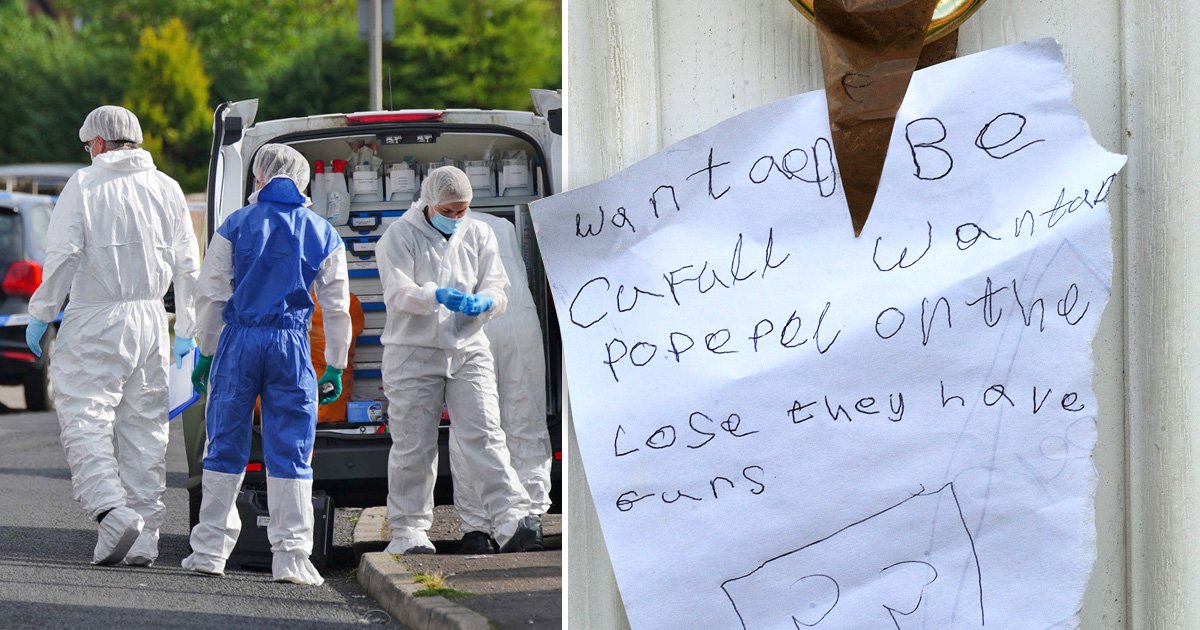 Children have warned each other of ‘people with guns’ following the death of Olivia Pratt-Korbel.

Communities in Liverpool have been left shaken after last night’s tragedy in Dovecot.

Olivia, 9, was killed as she and her mother Cheryl unwittingly became caught up in a violent incident near their home.

A gunman had targeted two men on the street outside, one of whom fled into the family’s house.

Olivia was fatally struck by a bullet as she stood behind her mother.

Heartbreaking notes have now been spotted around the area as families struggle to come to terms with the tragedy.

One reads: ‘Be careful, wanted people on the loose. They have guns.’

Another adds: ‘Wanted. Be careful, they’re on the loose, they have guns, there are two of them.’

It is believed a young girl in the area put up at least one of the notes.

The gunman behind Olivia’s killing, branded a ‘cowardly individual’ by police, remains at large.

‘The violence in the city feels out of control,’ one Liverpool resident had tweeted following the news of the schoolgirl’s death.

Last night’s shooting comes after a spate of killings involving guns and knives on Merseyside.

Detectives have urged anyone with information on last night’s incident to come forward and have promised they will be protected in doing so.

Speaking today, Chief Constable Serena Kennedy said: ‘I also want to take the opportunity to appeal to members of the criminal fraternity and ask them to examine their consciences as they will have vital information that can help us.

‘The killing of a nine-year-old child is an absolute tragedy and crosses every single boundary, and I would urge them to do the right thing so we can put this person behind bars.’

Liverpool West Derby MP Ian Byrne has said there is ‘lots of anger out there’ following the shooting of nine-year-old Olivia.

The Labour MP told BBC Radio 4’s World At One programme: ‘It’s been exceedingly difficult listening to obviously the news this morning and then getting more details this afternoon of the horrific incidents around Olivia’s death.

‘It’s been difficult to process for the whole community.

‘There’s lots and lots of anger out there at the moment. There’s lots of outrage, disbelief that this could happen in our community.’

He went on: ‘At the moment, it’s very raw. People are processing what’s happening, getting more information, as you said by the hour, but there’s a lot of fear and a lot of anger out there at the moment.’

The shooting took place in the Dovecot area of the city at 10pm last night.

An investigation is underway and house-to-house, CCTV and forensic enquiries are in the process of being carried out.

Neighbours on the street told the Liverpool Echo they heard four gunshots ring out before police arrived on the scene.