Cost of Living: Man fears how his mum 'will afford heating'

Save the Children has revealed how youngsters are stressed, anxious and struggling to sleep as their parents wrestle with soaring prices. The findings have triggered calls for the Government to protect the most vulnerable children at a time of economic turmoil.

Polling by Opinium for the charity found 24 per cent of parents on universal credit say that rising costs have led to their children “getting more stressed and anxious”.

Around one in five (22 per cent) say they “get upset more” and have trouble sleeping (19 per cent).

And 18 per cent of the parents said their offspring “feel like the odd one out among their friends” and are “struggling to learn”.

Nearly one in three (32 per cent) said their children had missed out on activities such as hobbies, sports and birthday parties, and 25 per cent said they had less or lower-quality food. 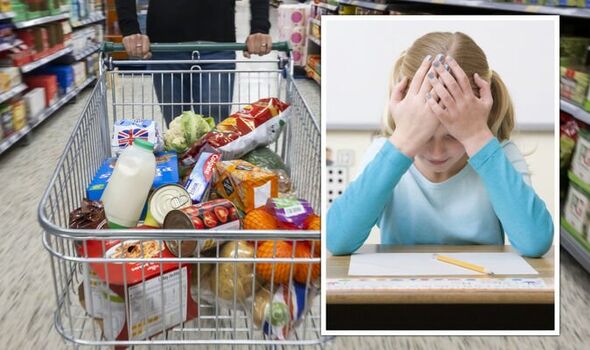 A quarter had not been able to take up educational opportunities such as school trips or clubs, while 22 per cent had gone without presents or celebrations.

Twenty-one per cent of the parents said their children have had to wear clothes that do not fit, and a fifth said they did not have the right gear or equipment for school.

Pippa, a 55-year-old mum of a seven-year-old daughter living in the West Midlands, said: “I know my daughter has picked up on my stress about financial issues as she’s heard me saying I’m struggling.

“I know she has told her friend that she thinks we’re poor.

“When my friend told me what she’d said, I felt like I’d been stabbed through the heart. It hurt to know she’s feeling like that.”

And Vikki, a mum of two from County Durham, said: “I’ve hidden party invites from my children because I knew I couldn’t afford to take them or buy a gift.

“Children pick up on stress and changes within a household no matter how much a parent or caregiver tries to shield them.”

Dr Jen Daffin, a psychologist who works with Save the Children, warned the cost-of-living crisis “is leaving children to carry the burden of adversity into their adult lives”.

The charity is calling on the Government to introduce help that targets children specifically, including a boost to the child element of universal credit of £10 per week per child.

But a Government spokeswoman insisted major work is already under way to help youngsters.

“Supporting children’s and young people’s mental health is a major priority. We have seen a 40 per cent increase in the mental health workforce, and we are increasing investment into those services by at least £2.3billion a year by 2024.

“But we recognise people are struggling, which is why we are saving households an average of £1,000 a year through our energy price guarantee and allowing working people on universal credit to keep £1,000 more, on average, of what they earn.”