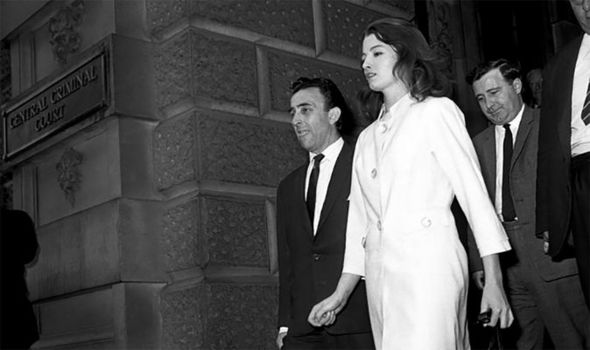 The image of her in a white mini dress was found by her son Seymour Platt while on a research project no child should ever have to undertake – a painstaking trawl through the most intimate details of his mother’s life in an attempt to posthumously clear her name.

And today the Daily Express can exclusively reveal that his efforts are finally bearing fruit. Fifty-seven years after Christine Keeler was wrongly imprisoned, Seymour has just received a letter from the Ministry of Justice (MoJ) asking him to present his dossier of evidence to the Criminal Cases Review Commission (CCRC), marking a significant breakthrough in his struggle for reparation.

“The Ministry of Justice could have rejected my appeal for a pardon but they have instead directed me to the CCRC to present our case,” says Seymour. “I do feel this is a vindication of all the hard work done by myself and my legal team to achieve justice for my mother, who was the victim of injustice for so many years.

“We have submitted many documents to the CCRC, which I believe presents a powerful case to quash her conviction for perjury. I am more confident than ever that we have made a big step in that direction. Finally, justice may be done.”

Being the son of Christine Keeler has never been easy. She was dragged down by the weight of notoriety that followed her around after the Profumo scandal and, even as a young child, Seymour bore witness to her pain.

“My mother was vilified by the public and MPs in Parliament, violently attacked, sexually abused and suffered dreadfully as a victim of crime, yet many people scorned her because they simply didn’t know the whole story,” says Seymour, 49, a business analyst who lives in Longford, Ireland.

“One of her dying wishes was for me to make sure the truth is told and that is what I am doing even if it means taking on the establishment, which fought so hard to crush and ruin her.”

Since her death in 2017 at the age of 75, Seymour has continued fighting the battle his mother was too exhausted to pursue in her lifetime. The breakthrough came after Seymour watched the BBC drama, The Trial of Christine Keeler, starring James Norton and Emilia Fox. Kate Triggs, a producer on the 2019 series, which featured Sophie Cookson playing Keeler, called him with some startling news.

“Kate told me they were telling the story right up to my mother’s release from prison and the drama would talk about the police advising my mother to lie in her court case – the lie that would see her go to prison for six months,” says Seymour. “That hit me like a brick. I had never heard that before. My mother had never said that to me. I checked online. I re-read her account.

“Christine believed she should never have gone to prison, but she did sometimes struggle to argue her case. It was so complicated with lots of characters in the story.

“I remember in 1993 sitting in a TV audience watching her being interviewed by Clive Anderson on a talk show. She said, ‘I was the first person to go to prison for not stating who was at the scene of a crime when a crime took place.'” Keeler – notorious for having simultaneous affairs with married cabinet minister John Profumo and Soviet spy Yevgeny Ivanov at the height of the Cold War – was stalked, raped and held captive by her former lover Lucky Gordon.

He went free while she went to prison for perjury (she refused to name two men who witnessed his attack on her in order to protect them). Seymour, spurred on by the TV revelations, spent nearly two years piecing together what happened around the time of the seedy court case – a world away from her glamorous life as a model, show girl and mistress of the rich and powerful in her early days in London in the 1960s.

Ploughing through piles of documents – with the help of his solicitor James Harbridge and QC Felicity Gerry – Seymour gathered a dossier of evidence which, he believes, exonerates his mother and shows her in a completely different light.

The application for her pardon was lodged on June 14 this year with the Lord Chancellor and the Justice Department. Now, at last, he has cause for hope.

“Justice must be served and for that to happen my mother deserves a posthumous pardon, especially after everything she’d gone through,” he argues. “She needed professional help as a victim of crime, not to be sent to jail as a criminal.”

Keeler was born in Uxbridge, Middlesex, and grew up in a makeshift home converted from two railway carriages. Her father Colin Keeler left the family while she was a baby and as a child she suffered from malnutrition. After being sexually abused by her stepfather she fled to London at the age of 15.

While working at a Soho cabaret bar, she met well-connected society osteopath Stephen Ward who introduced her to both her lovers – Secretary of State for War Profumo and Ivanov, a naval attache, at a pool party at Cliveden, the Buckinghamshire mansion owned by the 3rd Viscount Astor.

When the story came out, Profumo lied to the House of Commons. He later resigned, precipitating the fall of Harold Macmillan’s government. But while the scandal made her a target, it was in fact Keeler’s entanglement with jazz singer Aloysius “Lucky” Gordon that saw her go to jail.

Unknown to Keeler, Gordon had served two years in prison in Denmark for stabbing a woman in the stomach. He stalked her at the Marylebone flat she shared with Ward and enticed her back to his apartment, where he raped her at knifepoint.

Ward persuaded her not to call the police but Lucky Gordon continued stalking her and raped her again in January 1962, holding her against her will for two days. This time she pressed charges. After being threatened she withdrew the allegations but bought a gun to protect herself.

“She was basically living in fear of her life,” says Seymour. “It must have been the most awful time for her.”

Gordon attacked Keeler at the home of friends, punching, slapping and kicking her – an assault witnessed by two visitors there at the time, Rudolph Fenton and Clarence Camacchio. But when she reported it, Keeler failed to give police their names.

“One of the two men was married, the other was on probation, so my mother didn’t want to drag them into the court case,” says Seymour.

“Gordon posed a threat to her life and she knew she had to give evidence against him. Going to court was very brave and there were supporting witnesses, so she didn’t need the s g e testimony of the other two men.” Gordon was jailed for three years for actual bodily harm. Astonishingly, he was later freed on appeal on the grounds that Christine had committed perjury by failing to name the two extra witnesses.

“Nowadays my mother would be seen as a victim of violence and sexual abuse, not a criminal,” insists Seymour. “The decision to prosecute her for perjury was vindictive and she should not have pleaded guilty.

“She was very badly advised, but you have to understand the immense pressure she was under. She’d given those two men her word that she would keep them out of it and she paid for that honesty with her freedom.

“Lucky Gordon posed a danger to women and she was brave enough to try to keep him behind bars. In 1973 he was jailed for six months for stabbing an ex-girlfriend five or six times with a screwdriver. I think my mother was lucky not to have been killed by him.”

Keeler served six months in Holloway Prison, a traumatic experience from which she never really recovered.

“Going to jail was the thing that hung around her neck more than anything else,” says Seymour. “Before that she’d never been in trouble with the police. Afterwards she was a pariah. She couldn’t find a job. She became a dinner lady but when they found out she was Christine Keeler she was told she couldn’t stay. It was the same story when she got a job at a dry cleaners.

“Yes, my mother was naive but she was the most honest woman I’ve ever known. She hated liars. She hated mendacity. She had no problem telling the truth to somebody, however painful that truth was.”

When Ward was prosecuted for living off the illegal earnings of Keeler and her Rice Davies friend Mandy Rice-Davies, she had to live with the added shame of being branded a prostitute.

Ward committed suicide before he could be sentenced.

Keeler married James Levermore in 1965 and had a son, James, but the marriage broke down.

In 1971 she married Anthony Platt and Seymour was born in December of that year but the couple separated soon afterwards.

“As a child growing up she showed me so much love,” says Seymour. “We never had much money but I knew I was loved and that was more important than anything.

“My mother always insisted she was never a prostitute. She was just trying to make the best of her life.

“The public only wants to know about the political scandal, but what happened to my mother was a scandal as well.”

Seymour’s legal team had written to the Justice Secretary, now Dominic Raab, asking him to exercise his power to recommend to the Queen the Royal Prerogative of Mercy in the case of his mother’s perjury conviction.

The MoJ says it is unable to consider the request until an application to quash the conviction is lodged with the CCRC, which investigates alleged wrongful conviction cases.This has now been done.

Seymour says he hopes it will bring his mother the justice she was br de denied in her lifetime.

“Sadly, my mother is not alive to see the progress we have made, but the hope is history will soon judge her in a kinder light and people will understand that she was a victim of violence and had very little support.”