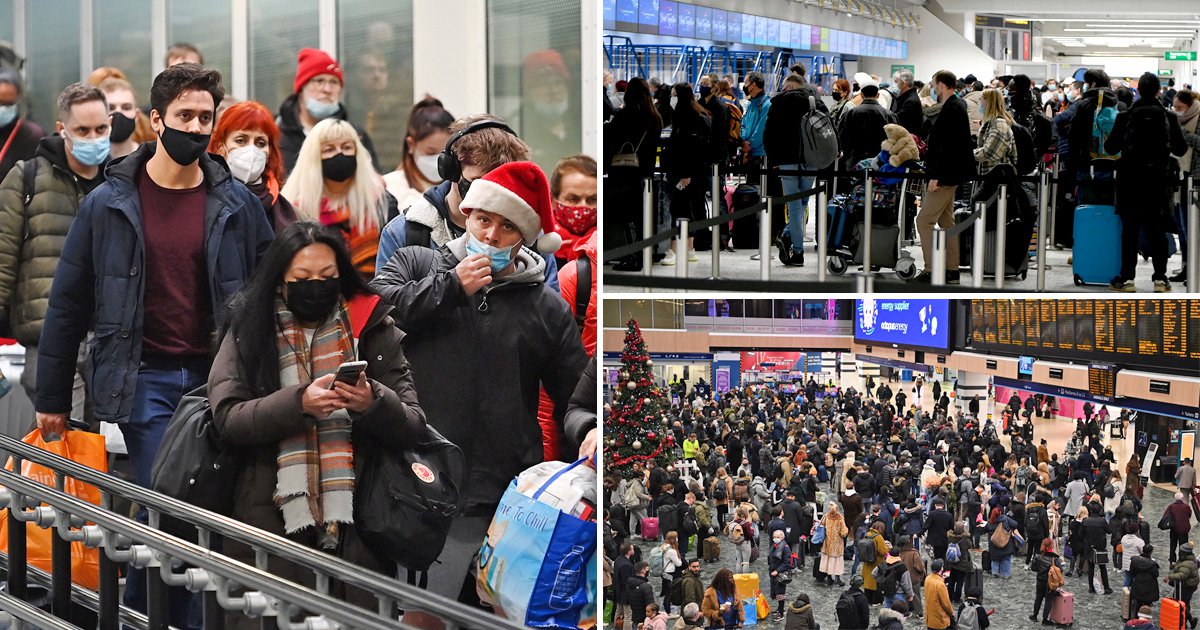 Brits desperate to get home for Christmas have been hit with a triple whammy of flight disruption, train cancellations and motorway congestion.

Airline passengers have accused bosses at major airports such as Heathrow, Gatwick and Manchester of causing them misery when flying and arriving in Britain.

Travellers ranted on social media that they had been waiting for more than three hours to get through passport control with few Border Force staff on hand to help.

One person tweeted about Heathrow: ‘My brother’s flight landed at 11:06. It’s now 13:45, and he’s still in the queue to pass Immigration, and he thinks he’ll be another hour!!!’

Another said: ‘After my 1 hour 45 min queue at Heathrow Terminal 3 immigration, I started to wonder if the useless Border Force were away in Dover. Literally 4 windows out of around 35 were open (self check in not available).’

A third fumed: ‘@Gatwick_Airport is an absolute joke. They’re not even moving our queue and take off is in less than 2hrs.’

Shocking pictures showed hundreds of customers packed into lanes with their luggage as they waited to be processed by officials.

“We apologise for any inconvenience caused and will continue to support Border Force where we can. If you require urgent support, please ask the nearest colleague for assistance.’

Stations were also packed as passengers faced delays and cancellations due to industrial action and staff shortages.

CrossCountry, which runs trains from Scotland and northern England via the Midlands to South Wales and southern England, cancelled dozens of services because of a strike by members of the RMT union.

The firm is not operating any trains on Christmas Eve between Aberdeen and Edinburgh; Glasgow Central and Edinburgh; Derby and Nottingham; Leicester and Stansted Airport; Cheltenham Spa and Cardiff Central; Newton Abbot and Paignton; or Plymouth and Penzance.

Hundreds of other trains have also been cancelled across Britain due to pandemic-related staff shortages, with rail firms Avanti West Coast, Northern, ScotRail, TransPennine Express and Greater Anglia all affected.

Travelling by car is not much smoother, with roads said to be seeing their busiest festive period for five years as people travel to be reunited with their families.

Christmas Eve has fallen on a Frida for the first time since 2010, adding extra pressure on the system from those who had to do a full working week before starting their journeys home.

The RAC had warned that it would be ‘Frantic Festive Friday’ with an estimated 5.3million journeys by people embarking on overnight stays or day trips taking place.

Roads were set to be busiest between 11am and 2pm, with the worst problems predicted on the 10-mile stretch of the A303 through Wiltshire between Amesbury and the A36 junction.

It is a marked difference from last year, when much of the country was plunged into restrictions that banned or limited travel and mixing with different households.

However, Covid is still causing disruption for many amid a surge in Omicron infections around the globe.

Passengers travelling home for Christmas have been hit with disruption worldwide after airline companies cancelled thousands of flights.

The surge of Christmas Eve cancellations came as the rapidly spreading new variant meant carriers were unable to staff their flights.

The website of the flight tracking firm FlightAware showed that 2,175 flights around the world had been scrapped on Christmas Eve – a typically heavy day for travel.

Airlines in the US have canceled more than 400 flights combined on Christmas Eve and delayed at least 1,000 more due to staffing shortages.

While many people are desperately trying to get home. thousands in the UK will be forced to spend Christmas alone due to catching Covid.

A total of 766,000 people across the UK have tested positive for the virus since December 16 — the cut-off date for coming out of quarantine in time.