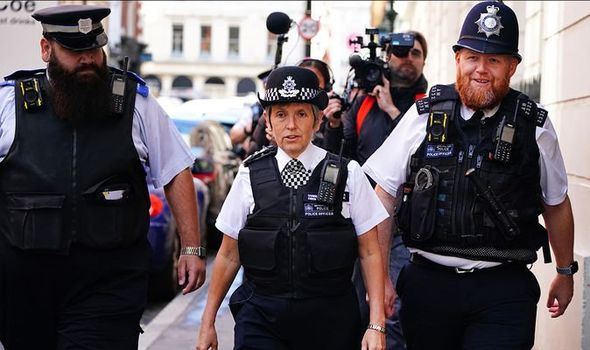 Cressida Dick said today (Friday) that the “terrible murder” of Sir David Amess a fortnight ago was “a chilling reminder that the threat of terrorism is very real”. According to Dame Cressida, terrorists have been particularly focused on London.

Writing in the Evening Standard, she said: “A significant proportion of [terrorist] activity has a connection to London, so it’s vitally important that Londoners continue to be alert and vigilant.”

The worry about terror threats was “particularly true as we continue to enjoy regaining our freedom in the run-up to Christmas”, she said.

The UK’s terror threat level is currently set at “substantial”, which means “an attack is likely”.

Dame Cressida urged the public to show “courage” in reporting anything suspicious, adding: “We cannot defeat terrorism alone – we need your help and support.”

She said: “Bravery has many forms and we also need people to have the courage and confidence to report something to us that might feel wrong or seem suspicious – trust your instincts and ACT.

“Reporting something to us won’t ruin lives, but it might just save them.”

Dame Cressida noted that counter-terror investigations in the UK remained at “record levels”, with more than 800 live investigations.

Sir David, the MP for Southend West, was fatally stabbed at a constituency surgery in Leigh-on-Sea on October 15.

Following the attack, counter-terror police and MI5 were said to be concerned about a “rise of the bedroom radicals” among young people after spending months alone online during successive lockdowns.

One security source said the following Monday that counter-terror agencies had been concerned “for some time” that emerging from lockdown would increase the number of available targets for terror, while the opportunity for online radicalisation during lockdown was greater.

Sir David’s family said in a statement after the attack that their “hearts are shattered” by the attack.

They added: “The support shown by friends, constituents and the general public alike has been so overwhelming. As a family it has given us strength.

“We have realised from tributes paid that there was far, far more to David than even we, those closest to him, knew.”

Today, Dame Cressida attended a ceremony with the City of London’s Police Commissioner Ian Dyson, to commemorate the attack at Fishmongers’ Hall in 2019.

On November 29 that year, five people were stabbed by attacker Usman Khan in Central London, two of whom died from their wounds.

The event recognised the “selfless acts of heroism” by the first responders in the incident.

Dame Cressida wrote: “Although we were celebrating and commending some truly remarkable feats, it was with an enduring sadness, knowing that despite such heroic efforts, it was not enough to save Jack Merritt and Saskia Jones, who were tragically killed.

“Our thoughts continue to be with their families and loved-ones.”

The Met Police commissioner recounted how “many members of the public immediately responded” to stop the attacker, “giving no thought to their own safety” to “help those seriously injured”.

She continued: “At the conclusion of the Fishmongers’ Hall Inquests, the Coroner, HHJ Lucraft QC highlighted the ‘remarkable courage and compassion’ of the public, as well as the ‘commendable bravery’ shown by police officers, which undoubtedly saved lives.

“So it is only right that we are formally recognising those incredible acts of public and police at today’s ceremony of commendation.

“Such an impressive and professional response by our emergency services to an attack like this, however, does not happen without being prepared.

“We continually and diligently prepare and practice our response together so that should the worst happen, we are able to respond in the best possible way.”