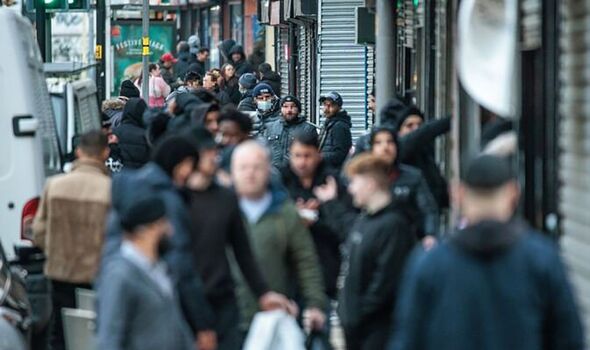 A street infamous for businesses that sell hooky clothing, perfume, tobacco and toys is set to be torn down.

Police believe shops and the area around them on Bury New Road – dubbed Counterfeit Street – are associated with organised crime gangs. Brazen selling of prescription drugs on the streets near the shops is a daily occurrence, officers say.

Buildings on the street in Strangeways, Manchester, will now be closed, compulsory purchased, and then flattened, according to the Manchester Evening News.

The 33 organised crime gangs thought to operate in the area have links to illegal immigration, modern-day slavery, women being forced to work as sex workers, and cannabis farms, police say.

A Sprinter van used in a burglary, containing thousands of pounds worth of counterfeit goods, in addition to a machete and an axe were all recovered from the area as part of police’s Operation Vulcan yesterday. The operation is designed to dismantle the criminality linked to the area.

Detective Superintendent Neil Blackwood, who is heading Operation Vulcan for Greater Manchester Police, said: “This comes directly from our Chief Constable. He has described Cheetham Hill as a place that is criminally hostile and he is not prepared to have that in his force area.

“Counterfeiting has been around for a very long time but the criminality has shifted into prescription drugs; people being exploited sexually and for their labour, and illegal immigration – a microcosm of criminality.”

Asked if the Operation Vulcan ultimately included demolition of the buildings used as warrens for counterfeit sales, he said: “Yes. We are going for closure orders, with Manchester City Council, then compulsory purchase orders.

“We are probably in the position of clear, hold, build. Clear it, and hold, so no one comes back, and then its Manchester City Council’s gift to give in terms of rebuilding. Most of those buildings will end up at the end of a bulldozer. Most unrecoverable, because they have been chopped and changed around.

“There has been a lack of consistency – we are there one day not the next, and that is where our chief has recognised that is a problem. So, we will be there every day. I have more patience than them.

“We have quite an established red-light district at the back of Strangeways, as improvements around Piccadilly have shifted the red light area. We are coming across people of Eastern European, and Asian heritage who are saying I don’t want to be here doing this. In Cheetham Hill last year there were 32 referrals to the National Referral Mechanism. We are talking about street workers, some of whom have been here quite a long time

“The area is quite synonymous with cannabis farming – Albanian gangs who have come in, taken vacant properties, and converted them into cannabis farms. They will have a diverse range of people working in them, most of whom are forced to do so – Vietnamese being amongst them. We are going into properties and finding people who are saying ‘I am not allowed out of here. I grow this, and that is my debt being paid off’. We are talking £10,000 per person.”

The officer added: “We understand there is a proportion of the community especially in these unstable economic times who are reliant on buying this stuff, especially with Christmas coming. Every time we go down there, there are customers who don’t see the problem of buying it. But there is so much more behind the counterfeiting which we want people to understand.

“In terms of counterfeit goods these Organised Crime Gangs (OCG) know Cheetham Hill is an outlet for them – so they are supplying them. They work together – so if one has a loss – North West Regional Organised Crime Unit took out 200 tonnes of counterfeit goods last year – that will be replaced quite quickly. We are talking a few days if that. We clear out a shop – it will be back in business with new shutters, all the stuff back on the shelves in a couple of days. This is why Vulcan is going for stuff which is causing most harm rather than stuff which is in our face.”

The lucrative nature of the trading in the area has triggered disputes leading to fighting on the street – in which machetes have been used.

“It needs to feel safe, it needs to be for the law-abiding community. We will do whatever it takes – arresting people for drug dealing; if they have premises, which a lot of them do, we will take it off them. We will close it, and the fire service will come and say, we are condemning it – if they go fishing in the Irwell at lunchtime we will check if they have a rod licence. They can get unlimited fines from Manchester City Council for not having the correct trade waste bins.”

“The OCGs use Bury New Road as a hub – it is so well known – as Counterfeit Street. But it is so much more than that. Thirteen people died in Greater Manchester last year because of prescription medication. Cheetham Hill is the hub for illicit prescription medication. If you speak to drug users, dependent people, they are travelling from far and wide – Bolton, Wigan, to come and buy their drugs.”

Some prescription drugs are being diverted from India and Turkey from legitimate loads. But millions are fake being manufactured in secret “labs” in Manchester.

“They can make millions of tablets in a week. They are knocking them out for £1 a strip which is about four to six tablets, so they are making an awful lot of money very quickly – and the customers are there.”

Commenting on Operation Vulcan Detective, Supt Blackwood said: “It is a really massive investment for GMP (Greater Manchester Police). We are hoping other organisations will give us the same kind of commitment, and staffing. If we don’t do it the problem will only got worse.” Money to finance the crackdown is coming from seized criminal assets.

The aim is to not only shut down Counterfeit Street but also to pursue multiple prosecutions for major offences including supply of drugs and modern slavery. Currently those caught selling prescription drugs in the area are escaping with community order sentences at court. But police will be seeking criminal behaviour orders which will result in people staying out of the area or risking being locked up.

The police force are already thinking ahead to the fallout from a disrupted Counterfeit Street. Detective Supt Blackwood said: “We know from intelligence that many counterfeit enterprises are considering going online anyway. We will work with the City of London Police who have a remit for tackling international property crime as one of our key partners. So in terms of that kind of displacement we have a plan.”