The starry shot of Durdle Door arch on the Dorset Jurassic Coast was taken by photographer Graham Hunt, 47, in the early hours yesterday. He said: “It was very chilly but you are guarded from some of the breeze by the cliffs.” The conditions also allowed a photographer to snap a woman appearing to hook the sun. 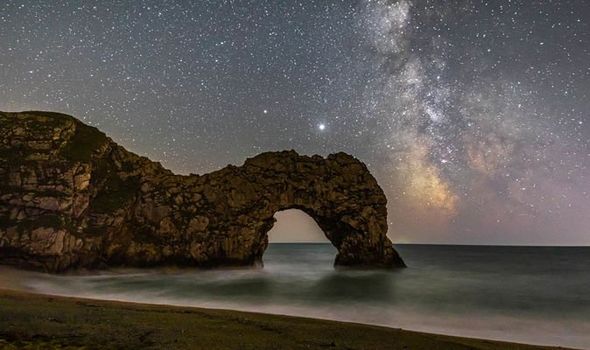 Astronomers say light pollution has fallen by 10 percent in the past year because of the change of habits brought on by lockdown.

Mark Thompson said: “It’s heartwarming to see. We have found that there’s a 10 percent improvement in the number of stars that can be seen.

“It’s an almost accidental result of lockdown. People’s habits in the evenings have changed. Not so many businesses are open so light is probably reduced there. There are not so many cars out.”

Photographers wanting to make the most of the cold still have time – the chill will last until the weekend before warmer air moves in as lockdown eases. Weathermen said drinkers hoping for an outside pint from Monday should be in luck as the mercury finally starts to edge up. Temperatures will rise further each day to 62F (17C) by the end of next week.

But Met Office forecaster Simon Partridge said wintry showers would continue for a few days. He said: “Nobody is immune.”