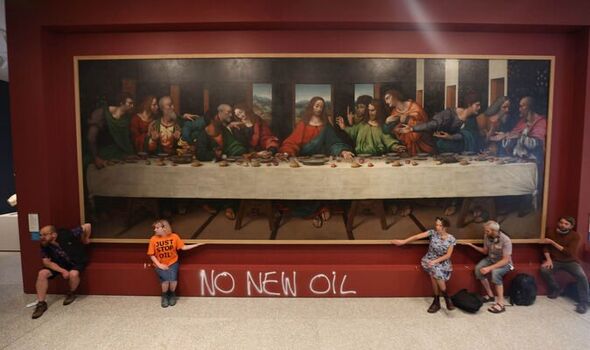 Five Just Stop Oil protesters stuck their hands to the frame of the 500-year-old work and sprayed graffiti on the wall underneath. The action was the latest in a series of protests at major art institutions in the past week. The RA said: “Five people entered the Collection Gallery and glued themselves to the frame of The Last Supper, an early 16th century copy of Leonardo da Vinci’s work.

“The protesters have also spray painted ‘No New Oil’ below the painting in white paint.”

Security guards acted quickly and the room was closed to the public. The RA said police were called “upon the protestors’ request.”

It comes after activists glued themselves to the frame of Constable’s The Hay Wain at the National Gallery.

The RA’s Last Supper is a full-scale copy of the original attributed to Giampietrino, a student of Leonardo da Vinci. It was painted in either 1515 or 1520 and bought by the academy, in Piccadilly, central London, in 1821. The 20ft work is believed to be worth tens of millions of pounds.

Da Vinci’s now faded masterpiece, painted around 1495-98, is in its original place on a wall in the refectory of the former Dominican convent of Santa Maria delle Grazie, Milan. 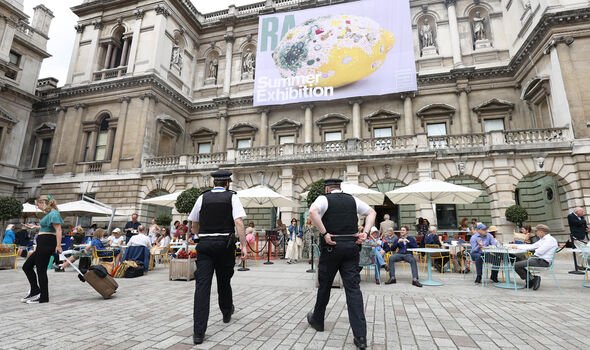 Just Stop Oil, which has links to Extinction Rebellion and other ­climate change groups, is calling on ministers to halt new oil and gas licenses in the UK.

Activist Jessica Agar, 21, an art ­student from Hereford, said: “No painting is worth more than my ­six-month-old nephew’s life.

“If the directors of this gallery really believe that art has the power to change the world then I demand that they claim that power, close and refuse to open until the Government commits to no new oil.”