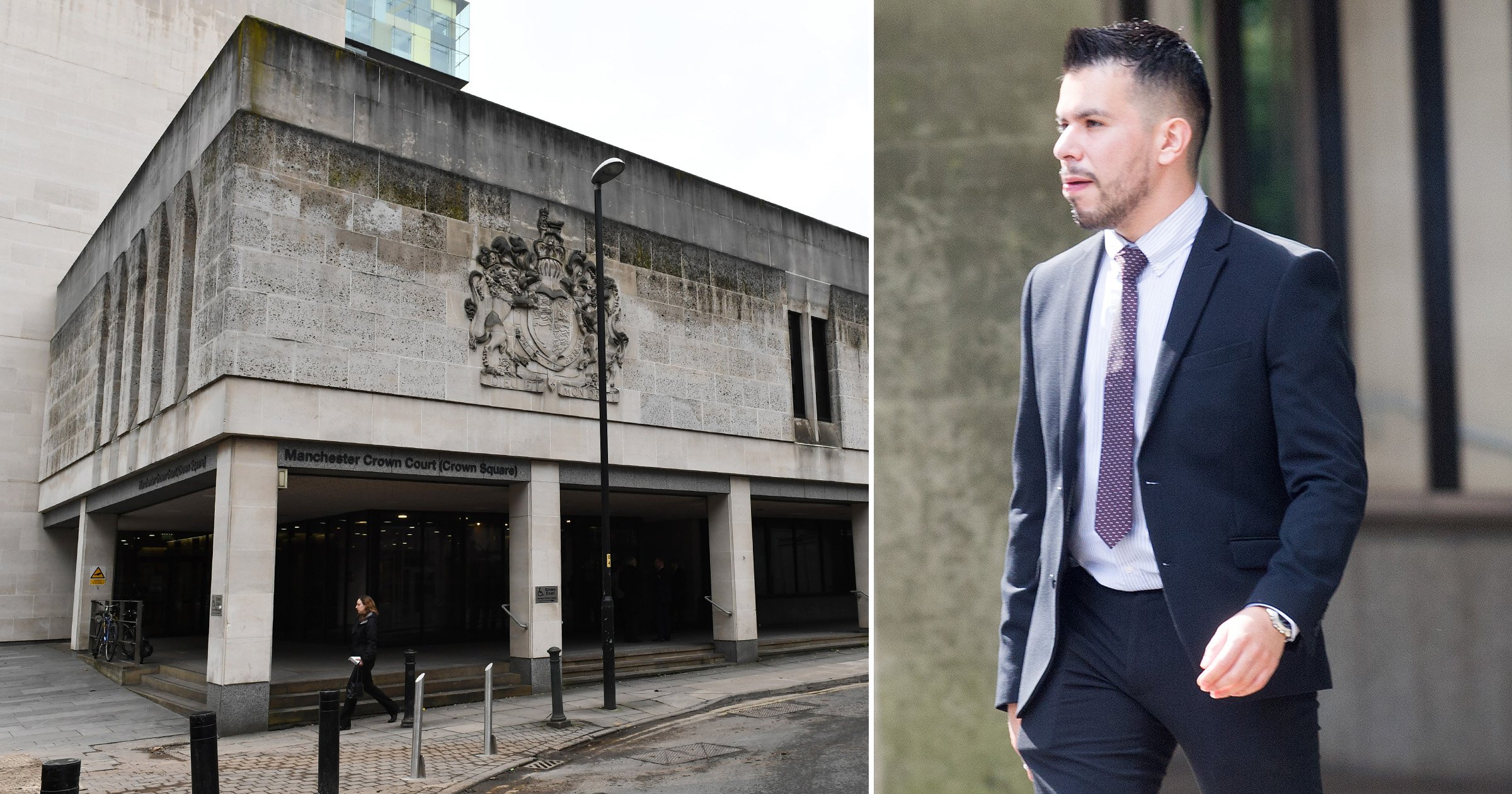 A man has been jailed after he cornered a woman in the ladies’ toilets of a pub, put her in a headlock and sexually assaulted her.

Manuel Carvajal, 25, was seen on the CCTV following a pub worker as she went to use the toilet, and didn’t leave for five minutes.

She had finished work at the pub early as it was quiet, and went to sit and have a drink with her brother.

But as she came out of the cubicle, Carvajal, who had taken cocaine earlier in the night, grabbed her and bent her over the toilet in a ‘determined and terrifying’ attack.

To stop her screaming for help, he put her in a headlock, shoved his fingers in her eyes and forced his fist into her mouth, Manchester Crown Court heard.

He then pushed her head down to his groin area and attempted to unzip his trousers in a bid to orally rape her, prosecutors said.

She was, however, able to grab her phone and open it using facial recognition and called her brother who she was having a drink with in the pub.

Carvajal, of Wythenshawe, was found guilty of sexual assault and was jailed for six years with an extended licence period of three years for the offence, which took place on November 25, 2018.

The court was told that with ‘considerable tenacity’ the victim was able to get her mobile phone out of her pocket and call her brother.

Nicholas Clarke, prosecuting, said: ‘During the course of that, the defendant had pulled her head towards him and pushed it down towards his groin, and was trying to undo his zipper.

‘Had the defendant been able to remove his penis, this would have been an attempted rape.’

Carvajal had also reached around to the front of the woman’s shirt and attempted to unbutton it.

Fortunately, her brother was able to save her from further assault and Carvajal was arrested shortly after.

However, he was released under investigation for nine months before he was interviewed by Greater Manchester Police (GMP).

Questions have now been raised about the police investigation and judge Hilary Manley has sought a full investigation into the force’s handling of the initial stages of the case.

In his police interview, the offender claimed he had gone into the ladies’ toilets accidentally and pushed her out of the way.

But swelling and pain to her head and scratches to her chest suggested otherwise.

In an emotional personal statement read to the court, the victim explained the significant impact the offence has had on her life, from losing her job to losing two stone in weight.

She said: ‘Before the sexual assault I was healthy, happy, fun-loving and confident.

‘All this changed me and now I live in a high state of alert, I feel constantly threatened by anyone and I only sleep about two hours at night.

‘When I do sleep, I have nightmares about the incident.

‘I lost my job as I can no longer work there because of what Manuel Carvajal did to me.’

She said that she has since gone into financial difficulty, relying on her mum and brother to help cover costs.

She added: ‘His sexual assault of me changed me forever.

‘I should have had years ahead of me, to try different things, to go out with my mates and go to pubs and clubs but all this ended on November 25, 2018.’

Carvajal was said to have no previous convictions and David Morton, mitigating, said he is ‘remorseful’ and that outside of this behaviour he was ‘well thought of’ and had ‘potential for the future’.

Mr Morton added that the man accepts the verdicts and the finding of the court – but his stance remains as it was in his interview.

Sentencing, Judge Manley said: ‘During the course of the early evening you were drinking with your colleagues, and the CCTV footage clearly shows you entering the men’s toilets on two separate occasions and it is clear from your body language that when you did so, you had taken cocaine in there.

‘During those five minutes you attacked your victim in a determined and terrifying manner.

‘She felt she was literally fighting for her life. Despite her screams you showed no mercy.

‘This was a protracted, determined, merciless and humiliating attack and changed her forever.

‘Sadly, you are just too cowardly to fess up to what you did.’