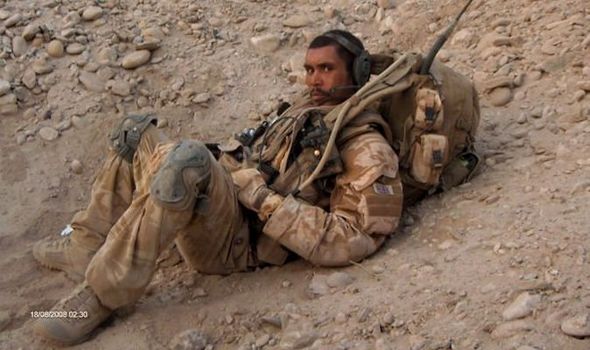 My well-known interest in gallantry stems from my father telling me about his experiences as a young Army officer charging up Sword Beach as part of the D-Day landings on June 6, 1944. I was aged around ten when he first explained how his commanding officer had been shot dead at his side. My father was wounded by shrapnel, fighting on until ordered from the battlefield.

For the past 35 years, because of this interest sparked by my father, I have been a collector of gallantry medals and it’s wonderful when two of my great passions meet.

With this in mind, I’m delighted to reveal I recently became the privileged custodian of a rare and much treasured award second only to the Victoria Cross in terms of Commonwealth awards for bravery in the presence of the enemy: the Conspicuous Gallantry Cross (CGC) ‑ awarded to a “Saint”, as people from St Helena are widely known.

Colour Sergeant Alwyn Stevens was decorated for his courage in Afghanistan and today, with his co-operation, I’m able to tell the full story of his unusual life ‑ and his outstanding valour ‑ for the first time.

He was educated locally and lived on the South Atlantic island with his family until he enlisted in the British Army in October 1999.

Upon completion of his basic training, he joined the Royal Irish Regiment. Only a few weeks later he was deployed to Sierra Leone.

During a stellar 22-year career, he later completed six tours of Northern Ireland, as well as tours of Iraq and Afghanistan. He qualified as a sniper in 2006.

In 2008, Stevens took part in a challenging tour of Afghanistan as part of Operation Herrick 8.

It was while serving as a corporal, he performed the remarkable acts of gallantry which led to the award of the CGC.

He was an Afghan National Army (ANA) platoon mentor deployed at Patrol Base ATTAL in Gereshk Valley in the troubled Helmand Province.

On September 12, 2008, Stevens and his six-man Operational Mentor Liaison Team (OMLT) were patrolling the vegetated “green zone” to the northeast of their base when a local approached them and warned of a sizable Taliban force planning an ambush.

Pushing forward, Stevens moved to secure a nearby compound from which he could observe the area. As his official citation states: “Approaching the mud-walled compound, he came across eight Taliban fighters who engaged with heavy small arms fire.

“Instinctively, Stevens charged the enemy, firing from the hip as he advanced. With his initial response, he successfully killed two enemies, wounded another and forced the remainder to withdraw and take cover in a field of corn, seven feet high.”

But the engagement was far from over. The insurgents established themselves in a strong position, and machine gun and RPG fire rained down on Stevens and his team.

He rallied his five men to him and organised them to try to win the firefight. At the same time, a second OMLT patrol put in a flanking assault on the enemy while the Fire Support Team cued up 105mm artillery and an airstrike.

Despite the danger, Stevens decided to hold his position so he could guarantee the destruction of the enemy.

He and his men applied controlled fire, just 120 metres from the artillery strike, preventing the enemy from fleeing.

The citation continues: “Following the successful fire mission and flanking assault, Stevens led an assault on a further enemy position which was suppressing from 100m away. Stevens led from the front and assaulted with grenades and his personal weapons supported only by his small team.

“His quick and aggressive attack accounted for most of the enemy, forcing the remainder to fall back under his onslaught.

“The battle continued for over three more hours. A further ten Taliban positions unveiled themselves and engaged the two OMLT patrols.

“Depleted stocks of ammunition now forced the OMLTs to withdraw. Stevens moved his men, still under heavy fire, into a position where they could suppress the enemy and thus extract the other OMLT.

“All the time, he remained in contact with the artillery and air support as 105mm guns conducted ‘danger close’ fire missions. Stevens stayed firm, dominating the enemy until his patrol had gained relative safety. Only then did he fall back and join them.”

The citation finishes: “Stevens displayed extraordinary courage, selflessness and leadership. He personally engaged and killed several Taliban Fighters and set conditions for the defeat of a strong enemy force.

“His actions ensured the enemy never again appeared in such strength in the ATTAL area during Op Herrick 8. Stevens’ outstanding gallantry was witnessed by two British Captains and his peers; it deserves the highest recognition.”

His CGC was announced in The London Gazette on March 6, 2009, and was presented to him by The Queen in an investiture at Buckingham Palace.

Remarkably, two other soldiers from the Royal Irish Regiment were awarded the CGC for gallantry on the same tour.

Recounting the incident, Stevens told me: “I came across three of them [Taliban fighters]. I shot those three and called airstrikes on their positions.

“You rehearse your drills in the UK. Those skills keep you alive, and then the adrenaline kicks in. You don’t have much time to think, it is more of a reaction but, if I hadn’t done what I did, I probably wouldn’t be here today. I was just doing my job.”

Stevens became a Sniper Platoon Commander in 2014. In June 2019, he was seconded to The Black Watch, the 3rd Battalion, The Royal Regiment of Scotland.

He retired from the Army in October and his medal group was sold at auction by Duke’s in November.

Now aged 43 and married with four children, he lives in Inverness, Scotland, and works as a Training Area Operative for Landmarc, a Ministry of Defence partner.

Stevens’ mother still lives on St Helena but he has only been back twice in 23 years, most recently for his father’s funeral two years ago. “But I still call it home,” he adds.

St Helena and its inhabitants should take enormous pride in the actions of this courageous and modest man.