Boris Johnson has urged the world to unite against coronavirus, suggesting it had made nations seem “selfish” and apparently warning against the comparison of countries’ death rates.

In a pre-recorded speech to the United Nations General Assembly, the prime minister said “the very notion of the international community looks tattered” nine months into the COVID-19 pandemic.

“Unless we unite and turn our fire against our common foe, we know that everyone will lose,” he said.

“The inevitable outcome will be to prolong this calamity and increase the risk of another.”

He went on to outline a plan for preventing another global pandemic, including a network of zoonotic research labs around the world to identify dangerous pathogens before they leap from animals to humans.

“COVID-19 has caused us to cease other vital work, and I’m afraid it made individual nations seem selfish and divided from each other,” he said.

“Every day people were openly encouraged to study a grisly reverse Olympic league table, and to take morbid and totally mistaken comfort in the greater sufferings of others.

“We cannot go on like that, we cannot make these mistakes again.

“And here in the UK, the birthplace of Edward Jenner, who pioneered the world’s first vaccine, we are determined to do everything in our power to work with our friends across the UN, to heal those divisions and to heal the world.” Government figures say the UK has suffered almost 42,000 deaths from coronavirus, the highest number in Europe and fifth largest toll in the world.

Thirty-four deaths were confirmed in the latest update on Saturday.

UK statistics agency figures, meanwhile, show that there have been more than 57,000 deaths registered in the country where COVID-19 was mentioned on the death certificate. 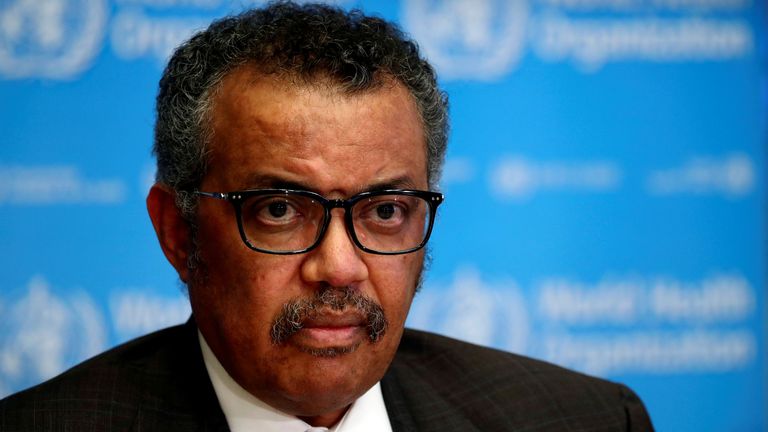 The UK takes the presidency of the G7 next year so this speech was teeing up how Boris Johnson is going to approach that role.

He listed his five-point plan to make sure that if there were any future pandemic, countries around the world could work together more effectively to develop a vaccine.

He also highlighted concerns about tariffs and charges being increased on things like disinfectant and soap, and the impact on poorer nations in need of supplies.

Essentially, the prime minister was setting out what he sees as the mistakes that he believes were made.

He referred to his “right to know” where this virus came from and how it started, as someone who has suffered from the disease.

He talked about increasing the level of funding from the UK to the World Health Organisation (WHO).

At a time when the US and Donald Trump has frozen funding, that is clearly a very political move.

The UK is becoming the biggest country donor to that organisation – and the PM is clearly trying to demonstrate just how important he believes it is that the international community come together to combat this virus rather than divide itself.