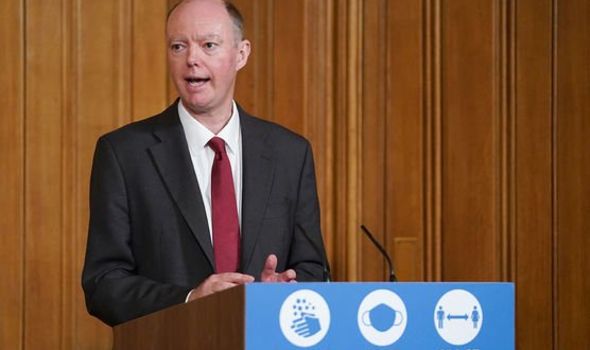 He offered hope that life would eventually return to normal but urged people to stick to the rules until the vaccines have been rolled out. During a BBC phone-in, Professor Whitty said: “I don’t think we’re yet at the peak, I’m afraid. I think we will be at the peak if everybody can double down and absolutely minimise their contacts.

“The point of the lockdown is to bring that forward, but it only works if everyone really thinks about every individual interaction they have and try to minimise them.”

A further 46,169 coronavirus cases were confirmed across the UK yesterday with 529 more deaths.

Some 32,070 patients with Covid were in hospitals in England at 8am yesterday, an increase of 80 percent since Christmas Day when there were 17,700.

The latest total included 3,055 patients in mechanical ventilation beds, more than double the figure of 1,437 on December 25. 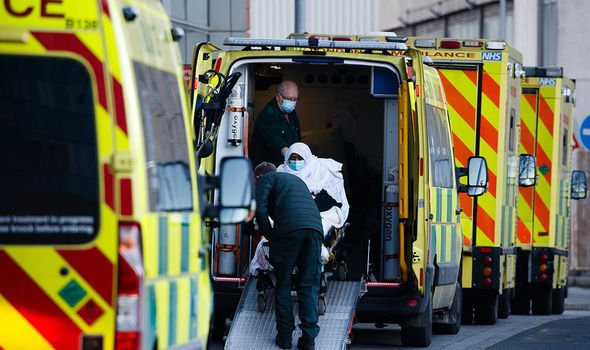 Sick and injured patients have been forced to wait for hours because of delays as ambulances queue outside hospitals to offload patients.

Professor Whitty warned the next few weeks would be “the worst of the pandemic in terms of numbers into the NHS”, with pressure on the service in “a completely different league” compared with a normal winter.

He said that the UK’s overall death toll of more than 80,000 was a shocking figure, adding: “I think anybody who is not shocked by the number of people in hospitals who are seriously ill at the moment, and who are dying life and death over the course of this pandemic, has not understood this at all. This is an appalling situation.

“We are now very close to the point, with vaccination, that we’re going to be able to get on top of this, but it’s not yet.”

Professor Whitty urged people to all they could to avoid contact with others.

He added: “This is everybody’s problem, any single unnecessary contact with someone is a potential link in a chain of transmission that will lead to a vulnerable person.

“In a sense tinkering with the rules may be useful, but the far more important thing is that everybody abides by the spirit of the rules that are there at the moment.

“Everybody knows what they need to do.”

Asked whether masks should be made mandatory outdoors, he added: “The much more important thing is that people should not be leaving their home unless they absolutely have to.

“I am confident we will go back to life as it was before at some point, that’s not in doubt.”

But normality would return sooner “if we can get on top of this now”.

NHS England chief executive Sir Simon Stevens warned the virus was “spreading out of control” in many areas. He told MPs on the Public Accounts Committee: “In London perhaps one in 30 people has the coronavirus. In parts of London it may be twice that number.

“If you look across other regions of England the issue is that coronavirus is once again on the rise. In Merseyside in just the last week there has been a further 50 percent increase in Covid hospitalisations. This is a very serious moment for the country and for the NHS.

“It’s worth remembering that this affects all ages – a quarter of the Covid admissions to hospital now are for people aged under 55.”

Speaking at a Downing Street briefing, NHS medical director Professor Stephen Powis said: “The public should be in no doubt that this fight is tougher than it has ever been.

“Even the area with the lowest number of patients – the South West – has more people in hospital now than the entire country combined did at the end of September.

“With hospital admissions typically occurring around two weeks after transmission of the virus, we are still to see the full impact of the Christmas loosening of restrictions reflected in those hospital numbers.”

The latest figures showed the biggest increases in cases were now in Liverpool and the West Midlands, overtaking the South and East of England, where the new variant first took hold.

All regions of England recorded week-on-week rises though there were signs in the South and East that it was slowing.