Indoor gyms, swimming pools and leisure centres in England are allowed to reopen today for the first time in four months – but at least a third of publicfacilities are expected to remain shut due to financial hardship.

Earlier this month, Culture Secretary Oliver Dowden announced that gyms and leisure centres would be able to reopen today, with strict hygiene and social-distancing measures.

But Community Leisure UK, the members’ association that specialises in representing charitable leisure and culture trusts across England, Scotland and Wales, estimated that 48% of all public leisure facilities face closure, meaning as many as 1,300 could disappear by the end of the year, along with more than 58,000 jobs.

The organisation said many will not be able to reopen this weekend due to the increased costs resulting from lost income during lockdown and due to operating at reduced capacity.

“The main reason is financial viability, because as with all of the high streets and services – zero income since the end of March.”

But as exercise lovers resume their routines, physiotherapists are urging them to take it easy or they could risk injuring themselves.

Chris Martey, a Chartered Society of Physiotherapy spokesperson and first contact physiotherapist in Bath and North East Somerset, told Sky News: “The main message is not to do too much too soon.

“It’s been months since people were in the gym – don’t be too over-enthusiastic.” 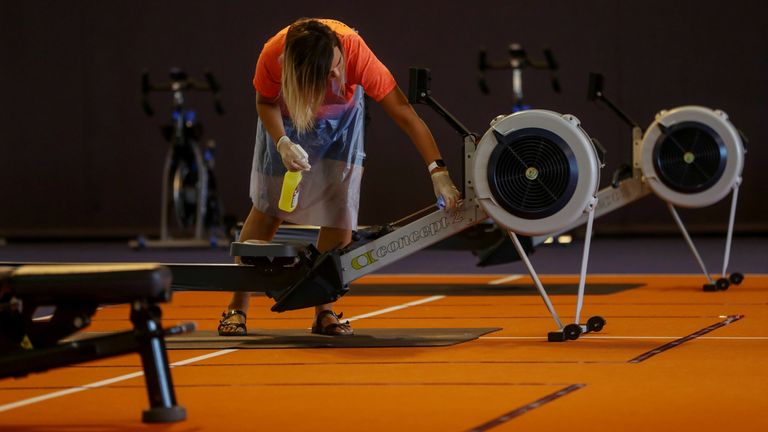 People should consider dropping the weights they are lifting or speed they are running by between 50 and 60%, he added.

“Don’t be afraid to reduce your weights, speed or incline. It’s much better to have gone back to the gym and got those endorphins at a lower level than to do too much and risk injury,” he said.

Despite them reopening in England, and already operating in Northern Ireland, gyms are having to adopt new measures set out by the government to make sure they are ‘COVID-secure’.

These include booking systems so centres can limit the number of people in the gym at one time to maintain social distancing.

Group exercise classes will also be smaller than before to avoid large groups waiting outside between sessions.

Gyms in Luton and Blackburn with Darwen are not reopening after they experienced a spike in coronavirus cases.

Swimming pools and other sports centres will not be allowed to open there either, Health Secretary Matt Hancock said.