Kenny Duncan, 57, steers himself into a food bank in his wheelchair looking bewildered. Asked if he has a social worker, he answers: “I’m supposed to, but I haven’t seen them yet.”

Mr Duncan, from Southall in west London, has type-1 diabetes that led to a foot infection and he recently had to have his left leg amputated.

The former Tesco delivery driver told Sky News: “The reason I came here is I was in rehabilitation after my amputation, but they needed the bed for coronavirus patients, so now I’m in temporary housing.

“I’m supposed to be getting benefits for mobility but none of it’s sorted yet. So, the food bank is my only way of getting what I need.”

Even though he is in an at-risk group and should be isolating, he is making a two-hour round trip for supplies and is one of an increasing number of new users arriving at Fulham and Hammersmith food bank.

Its founder, Daphine Aikens, told Sky News: “The most dramatic change since lockdown is the need. 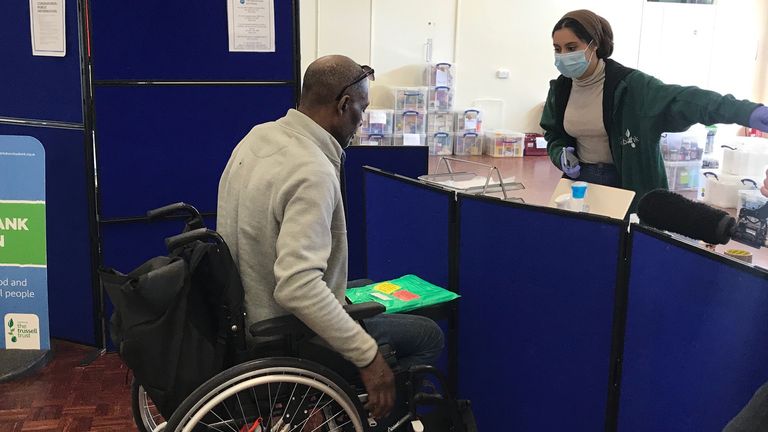 “We get busier year on year anyway, but for instance yesterday we gave out in one day what we would normally give out in a week.

“We’re already London’s busiest food bank, but this is unprecedented.”

There are no official figures yet on how lockdown has affected food bank use, but Sky News has spoken to facilities across the country reporting dramatic increases.

At Knowsley foodbank in Merseyside demand has tripled.

Sparkhill in Birmingham says its demand has also gone up three-fold and it has opened an emergency food bank in the Queen Elizabeth Hospital.

There has also been a trebling in Glasgow North West and Cardiff.

Gateshead food bank said its distributions have doubled, and it’s the same for Manchester central.

Generally, charitable food donations have risen, but not enough to keep up with demand.

A lot of the users are previously self-employed or working mums whose part-time jobs have gone.

There has been an increase too in older people who perhaps can’t get deliveries from family members.

Many we spoke to didn’t want to reveal their identities and couldn’t have imagined a few weeks ago they would be in this situation.

Arriving at the Fulham and Hammersmith food bank, Kim Jordan was there to collect food for a disabled friend – but having lost her job in a pie shop she might soon be collecting for herself. 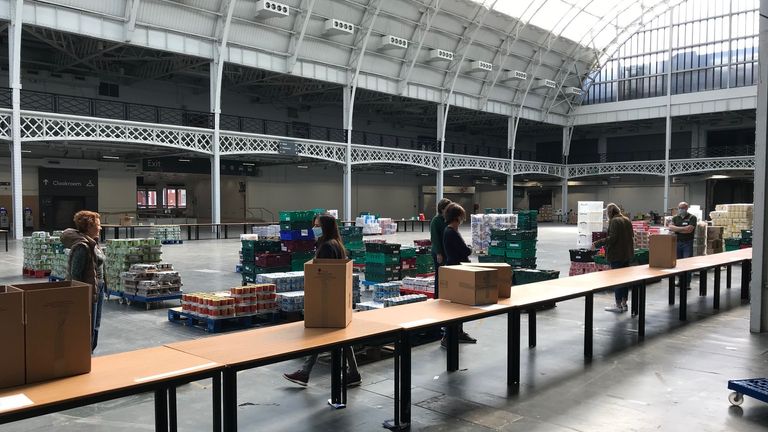 “I’m not working because I’ve lost my job through this virus, so I’m on Universal Credit,” said Ms Jordan.

“I wouldn’t rule out using the food bank myself. I hope I don’t have to – but I might have to.

“I can get by for another month maybe because I’ve had to use some savings, but it’s difficult times.”

Manager of the Hammersmith and Fulham food bank Saba Hassan said: “There was a lot of need before the virus, but the coronavirus means we’ve seen a lot more families, parents who’ve had to feed their kids who are now at home – whereas previously they would have been at school, and also we are seeing people who are now out of work.”

The food project has taken on a whole new dimension since lockdown and is running a delivery service to vulnerable families.

Using the empty space of the Olympia Exhibition Centre, it’s shipping supplies to about a hundred families a day. 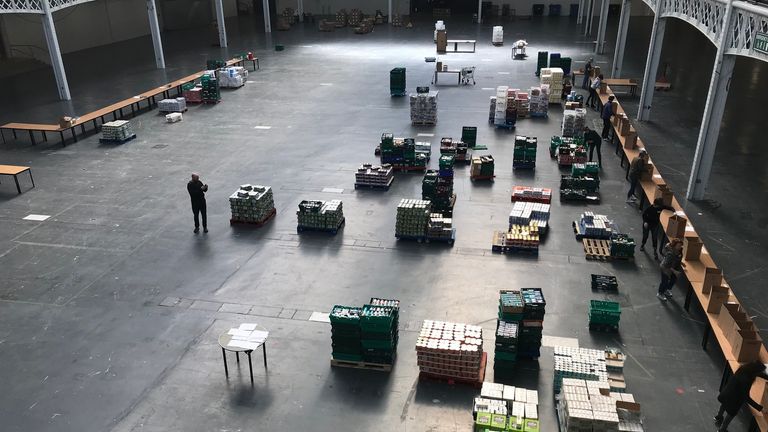 In normal times, the cavernous halls would have been hosting the Ideal Home Show, now there are mounds of baked beans, pasta and cereal packets being sorted into boxes with volunteers on a production line spaced two metres apart.

Food bank founder Daphine Aikens told Sky News that demand for donated food was already too high, but in these circumstances it will continue to rise.

She said: “I think people need to know that poverty is a long-term issue – it’s not just started.

“It is the government’s responsibility to sort out poverty and help people survive. Every person should have enough money to go into a shop and buy the food they need, whether there is a crisis or not.

“The benefit system does not currently meet that need. That needs to be rectified.

“For example, there is a built-in five-week wait for Universal Credit, there are thousands of people signing up to Universal Credit for the first time. They are in a crisis situation – what is going to happen to those people? How are they meant to survive?”

If you add to this the people who are currently being furloughed, there are now millions of us dependent on the state and those new to Universal Credit might be shocked that it doesn’t appear to cover the cost of living.

But watching Kenny Duncan hauling his wheelchair back from the food bank was a humbling reminder that within this crisis there are thousands of personal crises as people adapt to survive, not knowing what comes next.