Three RAF planes are set to leave for Turkey to pick up vital supplies of personal protective equipment over the next 24 hours, but can only depart when it is confirmed the shipments are ready, a defence source has said.

The first aircraft – an Atlas military transport plane – is scheduled to leave an airbase in Oxfordshire this afternoon, though timings appear to have slipped slightly.

With an estimated round trip of 12 hours, the earliest any planeload of COVID-19 upplies will arrive back at RAF Brize Norton is early on Tuesday morning.

That is two days after housing secretary Robert Jenrick announced that the “significant” shipment would arrive. 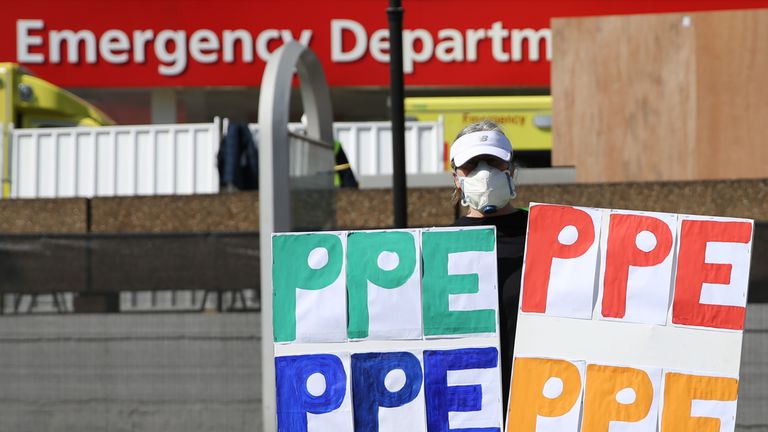 On Sunday, education secretary Gavin Williamson confirmed the delay and said he hoped they would be landing in the UK on Monday.

Earlier this morning, culture secretary Oliver Dowden told Sky News he was “confident” the 84 tonnes of PPE would leave Turkey “later on this afternoon”.

The delay in the delivery is thought to be on the Turkish side, according to the defence source.

The source said it was to do with the equipment from the Turkish manufacturer needing to be in the right place, coupled with “bureaucracy issues their (the Turkish) end”.

A second military transport plane is scheduled to fly to Turkey on Tuesday evening to help bring back the PPE and a third is set to travel on Wednesday morning, according to the source.

Those timings could slip or the number of flights be reduced depending upon how much can be fitted onto the aircraft that make the journey.

At the same time, if three planeloads are not enough, two additional flights could be put on.

The chief executive of the NHS Confederation, which represents organisations across healthcare, said delays on the shipment from Turkey “makes a difficult situation worse”.

Niall Dickson, said: “It would have been better had the Government not made the announcement in the first place.”