University students will be able to return home for Christmas, but Education Secretary Gavin Williamson has said some students may have to self-isolate at the end of term.

Speaking to the Commons, Mr Williamson said: “I know there has been some anxiety about the impact safety measures will have on the Christmas holidays.

“We are going to work with universities to make sure that all students are supported to return home safely and spend Christmas with their loved ones if they choose to do so.” 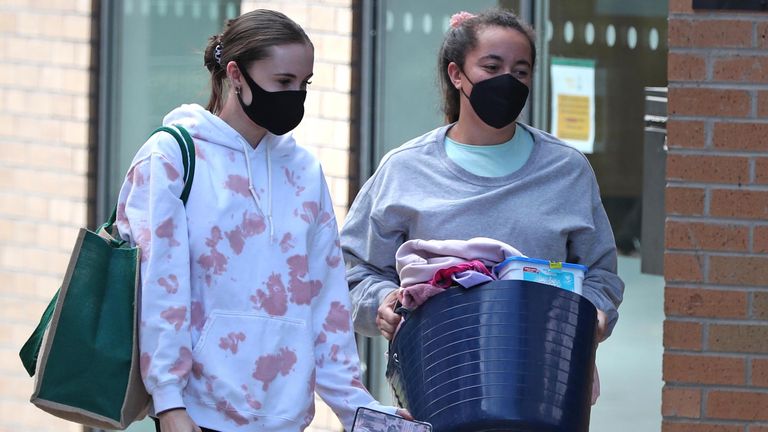 However, he said some students may have to self-isolate at the end of term – which could involve ending face-to-face learning early if needed.

The education secretary said it is “essential” that measures are put in place to make sure students can return home for the holidays if they want to.

He added that further guidance will be published “so that every student will be able to spend Christmas with their family”.

At least 33 universities in the UK have confirmed cases of coronavirus, while another two have suspected cases, according to Sky News research.

Thousands of students are having to self-isolate, including around 1,700 at Manchester Metropolitan University.

Mr Williamson said universities have been asked to provide “additional help and practical support” to students, including ensuring those self-isolating have access to food, medical and cleaning supplies.

Thanking students for their co-operation so far, he said: “We will never be in a position where we can eliminate all risk.

“But we will not condemn a generation of young people by asking them to put their lives on hold for months or years ahead.

“We believe that universities are very well prepared to handle any outbreaks as they arise.”

Shadow education secretary Kate Green said that if Mr Williamson does not “get a grip”, the situation in universities could get worse.

“If you’re doing history, you cannot be condemned to permanent online teaching, you might as well sit at home. Why have you paid all this money?” he said.

Sir Edward added: “This is not the sort of university that we all want, a place of light and learning, not enforced lockdowns.”

Analysis: This news will be welcome – but questions remain
By Kate McCann, political correspondent

Gavin Williamson was no doubt dreading his appearance in the House of Commons this morning after a week of negative headlines about students forced to stay indoors.

Perhaps that is why he came armed with the one piece of news he knew they would all be waiting to hear – that work is under way to make sure they can return home for Christmas.

In reality, keeping people from their families over the festive period was never going to work, but after being asked if it was possible last week Health Secretary Matt Hancock did not rule it out.

The news today that all will be able to go home even if some have to self-isolate first will be welcomed then.

More guidance on how it will work will be set out shortly by ministers, but whatever the rules state it will rely on common sense and people’s love for their families to protect the most vulnerable.

Other points of interest came as Labour’s Kate Green asked whether the government will help universities who want to set up their own testing regimes.

Mr Williamson did not answer the question but some institutions look set to do so regardless amid fears the national system will not be able to cope over winter.

Tory MP Sir Edward Leigh vented his frustration at how it looks for a Conservative government to be locking down students in their accommodation.

Mr Williamson replied that students must follow the rules on self-isolation as everyone else does, but he pointedly said they should not be held to higher standards than that.

The government is facing big questions about its approach to the increase of COVID-19 infections and, despite a speech by the prime minister this morning and a statement from Mr Williamson, many of those questions remain.

Critics want to see a policy that makes sense while cutting the infection rate – they will not put up with trial and error.