Some users of the new NHS contact-tracing app have received notifications saying they’d been near someone with coronavirus, only to discover the alerts were system checks sent by Google and Apple.

People who downloaded the COVID-19 app in England and Wales told Sky News they had received a notification which said: “Someone you were near reported having COVID-19.”

Yet, when they clicked on the message, they found no information explaining whether they should self-isolate. 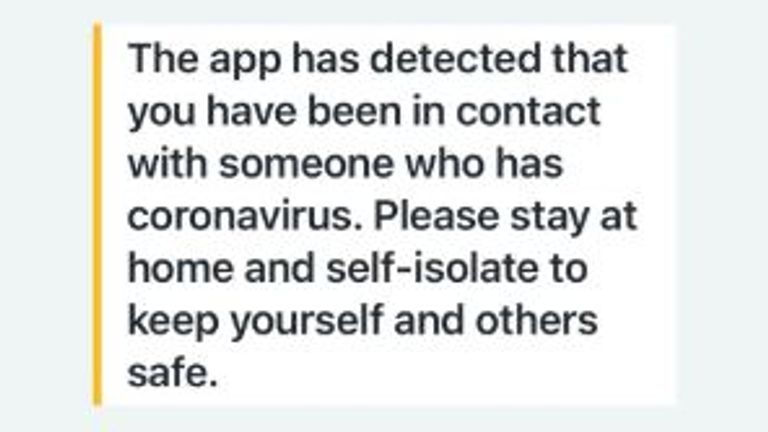 The Department of Health and Social Care confirmed it was a “default message” sent by Google and Apple – the makers of the app’s technology – but it had already caused confusion, forcing at least one user into avoidable self-isolation.

“I’m now self-isolating, just to be on the safe side… I don’t know whether it’s correct or not,” Maurice Leaver said. He received the message on Sunday, the day after downloading the app, and had been unable to clarify the situation with contact tracers.

Kathryn Sian, a biomedical scientist in an NHS lab, received the same notification, but went into work after reading about it online.

She said the “very stressful” message gave her “no confidence in this app at all”, adding: “I’ve turned off the contact tracing for now, only using it to check in at venues.”

Both Mr Leaver and Ms Sian described how the default messages “disappeared”. Although clicking on it took them to the homepage of the app, there was no sign it had ever been sent.

A Department of Health and Social Care spokesperson confirmed that default messages from Google and Apple would disappear or not be able to be clicked on. An official Test and Trace instruction to self-isolate would produce a message inside the app which said: “Please stay at home and self-isolate to keep yourself and others safe.” 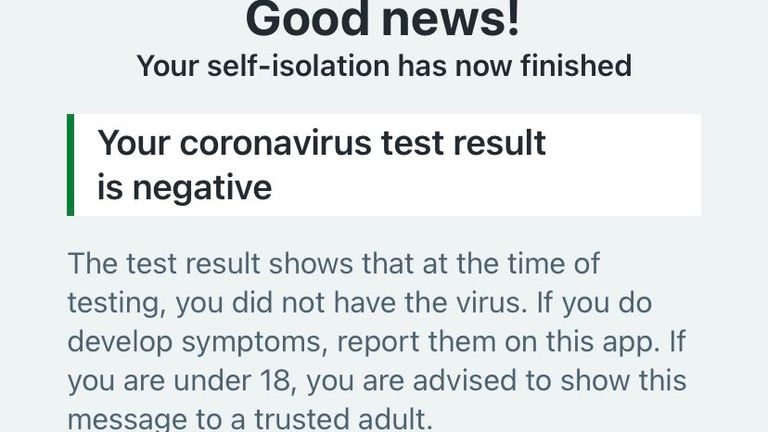 Apple or Google notifications, the spokesperson said, could be called “COVID-19 EXPOSURE LOGGING” or “COVID-19 Exposure Notifications”. It is not currently possible to turn off default messages.

Users who had received a disappearing notification criticised the lack of guidance available online and from the NHS 111 telephone hotline.

Jonny Easton said that when he called NHS 111 for more information after getting the alert, the call handler told him they’d never heard of the notification, but that they believed it should be ignored.

“One would have thought when the app was released one of the first things you would have done would be to conduct extensive training with the 111 members of staff, that told them, when you get this message you do this,” he said.

“It has damaged confidence because it seems it hasn’t really occurred in this situation.”

It is not known if the same alerts have been sent in other countries with the app, nor how many have been sent, but dozens of people reported receiving them on social media.

One asked: “Have I been ‘traced’?” Another said: “I got a notification that [someone] near me had tested positive… No information of it whatsoever in the app. What’s the point?”

This confusion is the latest in a series of issues raised since the app launched. On the weekend, it was revealed that tests conducted in hospitals or NHS labs could not be put into the app, leaving nearly a third of tests unlogged.

Users also questioned why it was not possible to register negative test results on the app, as these might release someone from self-isolation.

The Department of Health and Social Care said it had fixed this issue by allowing users to ask for a code from NHS Test and Trace, and screenshots seen by Sky News show that it is now possible to add negative test results on the app using the same system.

But one user who had registered a negative test questioned whether the message on the app made it clear that people who have been given a negative test might still have to self-isolate: for instance, if other people in their household or bubble continued to have symptoms. This only became clear, the user said, after clicking on a link in the app.

Professor Lillian Edwards, who sat on the Ethics Board for the first app, which was discarded by the government in June, said the issues raised questions about the app’s strategy.

“There was a choice to be made about putting out something very simple and very clear that gets it right the first time and therefore builds a lot of trust and confidence, or what the English app has gone for, which is putting in a lot of different functionalities,” she told Sky News.

“I think that is causing confusion which may lead to loss of trust.”

The issues come as the Westminster government revealed that the app had received 14 million downloads, or nearly 25% of the population of England and Wales.

Analysis by University of Oxford Professor Johannes Abeler comparing early adoption of contact-tracing apps in four different countries showed that the English and Welsh app was on track for record growth, with a larger proportion of the population downloading over its first weeks than in Scotland, Germany and Singapore.

Professor Abeler said: “The strong and widespread uptake of the app in England and Wales is very good news. This success is possibly due to people being asked about the app whenever they enter a pub or a restaurant. Prompting people about the app is likely to drive adoption. The extensive marketing campaign was surely also helpful.”

Commenting on the confusion caused by the Google and Apple notifications, a Department of Health and Social Care spokesperson said: “NHS Covid-19 app users only need to self-isolate if they get a notification directly from the app advising them to do so.”