The daily death toll announced by the government is unlikely to reveal when the UK hits the peak in fatalities linked to COVID-19.

The number of people who died with coronavirus in the UK revealed every afternoon only includes deaths “recorded” up to that day, not those who died in the previous 24 hours.

This means the total number of people who may have died on that day will only be known in days or weeks from now.

Analysis by Sky News, using figures from the Office for National Statistics, shows that at the end of March the number of deaths linked to COVID-19 in England was more than 80% higher than previously reported by the government.

NHS England, which also reported figures against the date of death rather than the date the deaths were announced, shows 60% more deaths than those reported by the Department of Health and Social Care at the end of March.

Why does this difference matter?

In a pandemic, it is not only important to know the total numbers of cases and deaths, but also how fast they are increasing. That determines how steep the curve is when plotted on a graph, and consequently how long authorities are likely to maintain the lockdown.

The delay in reporting deaths is leading to under-counting figures for each day. Hence, the curve that we are seeing today is not a representation of how fast the outbreak is growing at the moment. 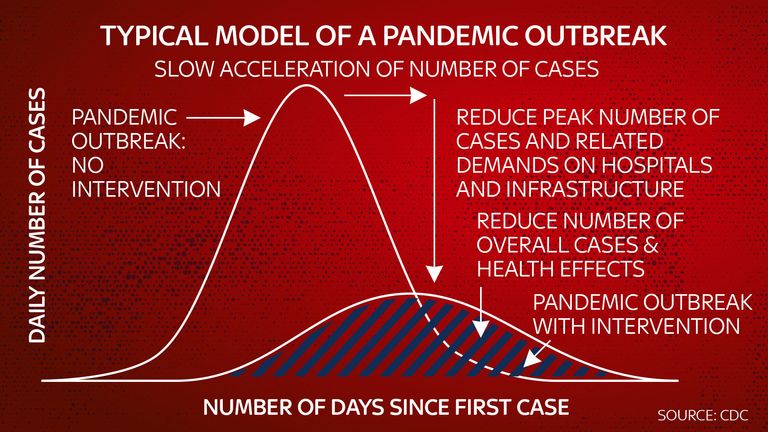 Sky’s science correspondent, Thomas Moore, said: “The steep upward curve in daily deaths has begun to level off, but spotting the moment the tide turns in this epidemic will be impossible until several days after the event.

“It can take up to two weeks for some deaths to appear in the statistics. The problem is even more acute on Monday’s and Tuesdays – the lag from the ‘weekend effect’ – with a spike mid-week as the numbers are corrected.

“But that won’t make any difference to the decision on when to ease the lockdown. Cases will have to fall dramatically from the peak before the social distancing rules are relaxed – otherwise the virus will quickly bounce back in a second wave.”

How many deaths is COVID-19 currently causing?

The exact up-to-date number is unknown and detailed data for deaths is difficult to collect in real time.

Both the daily government’s tally as well as NHS England do not count deaths outside hospitals, which the Office for National Statistics does.

The ONS figures count any death certificate which mentions COVID-19.

But this number is likely to be under-reported too as it does not include deaths from those not tested for coronavirus and there is a lag between when the death occurs and when it is registered.

Latest data from the ONS shows there has been an “excess of mortality” during the week ending 3 April in England and Wales.

The darkest dashed line in the graph shows the weekly average of the past five years and therefore the expected mortality for this year. The blue line reflects the actual number of deaths recorded by the ONS.

Two in five of the additional deaths recorded by the ONS were attributed to non-COVID-19 reasons – yet.

One report from the Centre for Evidence-Based Medicine says tracking deaths during a pandemic is often “fraught with problems.”

It suggests that the under-counting of COVID-19 deaths might be caused by the fact that COVID-19 deaths have been under-reported, but also due to an increase of other types of deaths or even because deaths are reported more efficiently and brought forward from subsequent weeks.