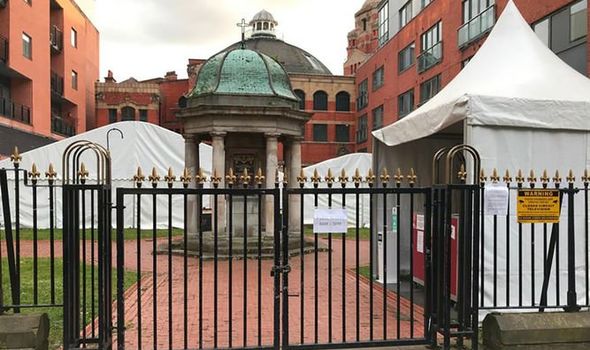 The beer garden, part of Grand Central Hall Irish Village, was created after the lockdown eased to permit people to drink in outdoor establishments. It’s in Roscoe Gardens, which is a public park and the site of both graves and a listed memorial in Liverpool city centre.

But residents have argued Liverpool City Council, controlled by the Labour Party, has “failed in its duty to protect this sacred, public space”.

Together, they claim public access to the park has been denied, graves have been “desecrated” and their concerns were ‘ignored’ by both the council and the businesses now operating on the site.

The joint statement said: “Since July 2020, Liverpool City Council has been complicit in the desecration of the graves of many of our city’s citizens and the gifting of an entire public park to a private business.

“Since July 2020 Roscoe Gardens has been locked off, and public access removed and denied, consistently by the business operating in the space.

“Roscoe Gardens is not just a public park, but a Unitarian burial ground and needs to be treated with the basic levels of decency, dignity and respect that are not only presumed human moral basics, but also obligations under law of the local authority.

“The council have allowed a marquee structure of such vast size, it should be subject to planning requirements, to be erected over and pegged into the graves of those interred on the site.

“The listed memorial of William Roscoe, one of the first abolitionists, is currently in a state of disrepair, as is the green space of the park itself.

“Members of the Unitarian congregation are being denied their right to pay their respects to those interred at the site. Members of the local community, including the elderly and those less able of body, have been deprived of their nearest green space during a pandemic and lockdown.” 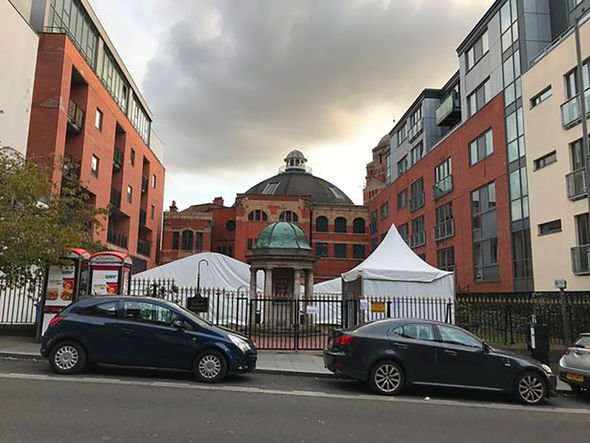 The council argues its officers have seen nothing that concerns them but residents nearby have complained about anti-social behaviour.

One local said: “It was full of drunks.”

Another wrote on Facebook: “This is very disrespectful and totally wrong.”

A spokesman for Liverpool City Council said: “The freehold of the land has been owned by the council since 1902 and there is a long-standing arrangement in place for Grand Central Hall to open and close the site.

“Officers from our Licensing Team and Environmental Health Team have visited the location on numerous occasions and at the times of the visits there was no evidence to indicate that the business was operating in breach of either the licensing legislation or the coronavirus regulations.”

The statement criticising the operation of the beer garden included a demand for the “immediate restoration of the dignity of those interred at the site and unfettered public access to the public park resumed”.

While the Grand Central Hall Irish Village disputed claims it had failed to engage with those living near the site, a spokesperson said the marquee will be removed on May 17 – the date from which bars can host customers indoors.

The spokesperson said: “Since taking over the lease for Grand Central Hall in late 2017, which also includes the Dome and Roscoe Gardens, tens of thousands of pounds have been spent to improve this Grade II listed site – from the hotel on the upper floors to restoring the old organ in the dome which was used as a Methodist church for many years.

“After creating 20 jobs across the site and retaining them during an international pandemic we were forced to open outdoors due to the Governments roadmap rules for hospitality.

“Before opening on April 12 outdoors with a marquee to cover customers we contacted all nearby residents to let them know of our plans. We then received a handful of emails which we answered.

“Questions [included] ‘how long will this marquee be set up for?’ [and] ‘to what time of a night will it be on until?’. We will indeed be closing the marquee and moving indoors from May 17, again subject to the government’s roadmap step three guidelines and if this is in fact passed by government.”