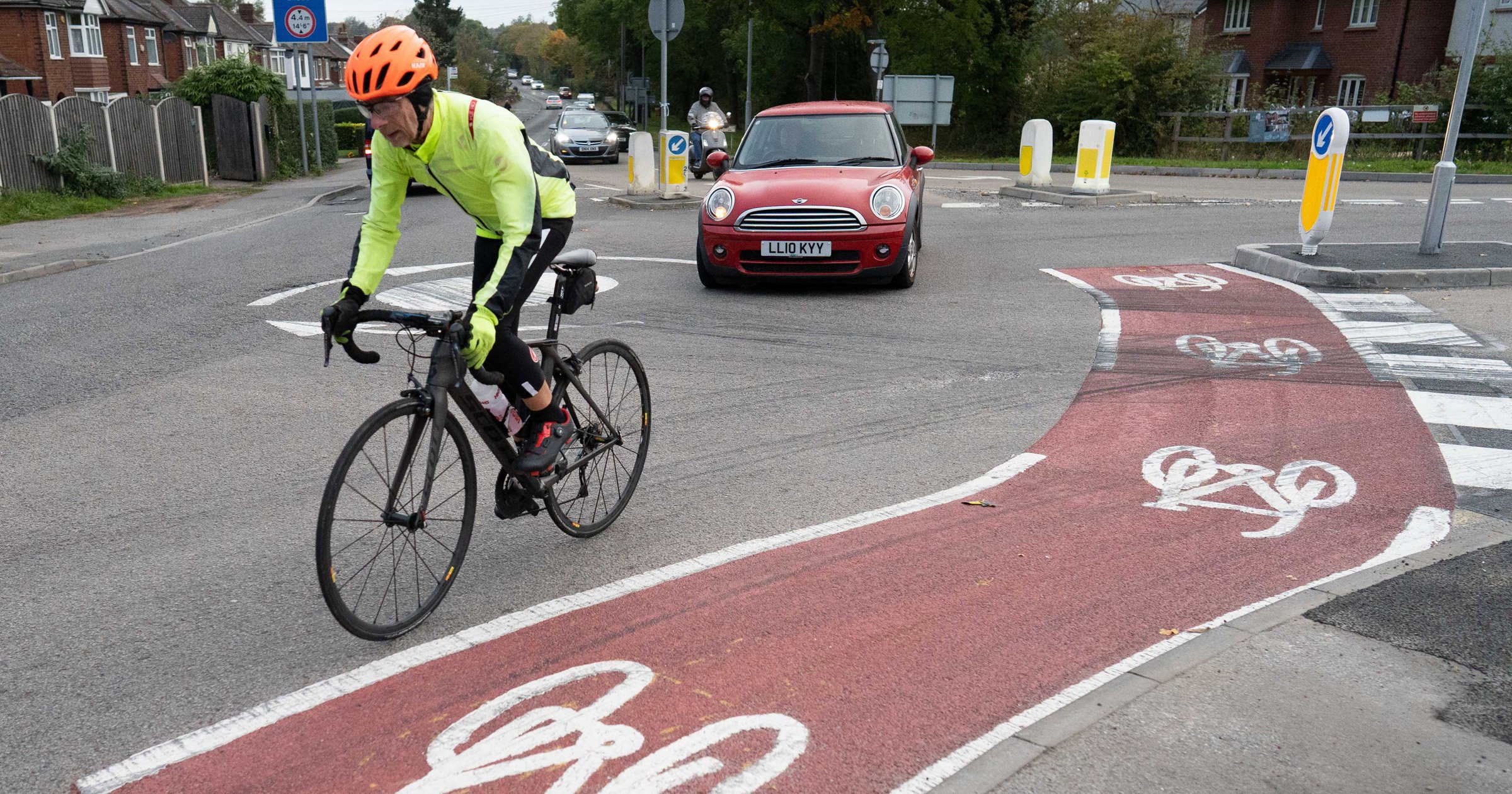 A newly-installed cycle lane thought to be one of the smallest ever created in Britain has been blasted as ‘completely pointless’.

Residents saddled with the 10-foot-long stretch in Nottinghamshire say it takes just two seconds to ride through – leaving even cyclists in a spin.

One bicycle user has at least been photographed travelling along the stretch of road in question – though not in the lane itself.

Council bosses are thought to have spent thousands of pounds on the scheme, which was painted on a Stapleford roundabout last week.

Users have flown off the handlebars over the bizarre decision – which provides cyclists with a zone half way around one side of the mini-roundabout – branding it a ‘crazy waste of taxpayers’ cash’.

The feature was installed by Nottinghamshire County Council at the junction of Ilkeston and Pasture Road to encourage active transport – but has instead caused an angry backlash.

Dad-of-one Simon Lafferty, 37, of nearby Sandiacre, is already tired of the lane, which he cycles through on his way to work as a software engineer.

He said: ‘It has got to be the most pointless cycle lanes in the UK. You’re on it for two seconds, if that, and then there’s no continuation of it anywhere nearby.

‘I thought cycle lanes were supposed to make travel safer but what’s the point of one where you’re back among traffic on the main road before you can blink?’

There is some debate around the length of time it takes to cycle through the lane – with other users suggesting it could in fact take as long as two-and-a-half seconds to complete.

Mr Lafferty continued: ‘I just couldn’t believe my eyes when I saw it. That lane is doing nothing to encourage people to get on their bike.

‘I obviously welcome cycle lanes as long as it’s done properly. But this is just comical really and a crazy waste of taxpayers’ cash.’

‘I’m not sure who had this bright idea but they need their heads examining. It makes the area a laughing stock.’

The move comes after Stapleford received a government grant of £21.2m as part of the Local Towns Fund, which will look at developing cycle lanes in the local area.

Richard MacRae, an independent councillor for Stapleford North on Broxtowe Borough Council, suggested it was one of the smallest cycle lanes in the world.

He said: ‘It’s neither (useful) nor ornament and the baffling thing is the state of our roads locally are really poor – there is a lot of other work that needs doing.

‘If this specific cycle lane was extended, then fair enough. Cycle paths in a good location are a good thing, we’ve got to keep cyclists safe.

‘But this is a joke. A lot of residents have called this a complete waste of money.’

Revising the time Mr Lafferty estimates that it takes to cycle on the path up to two and a half seconds, Mr MacRae continued: ‘This would have potentially cost thousands. It’s not even a week old and the paint is fading already.