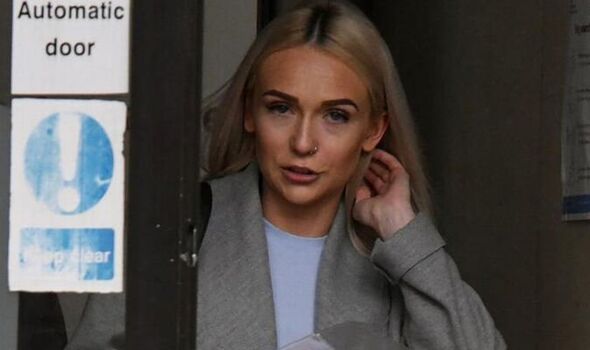 Chloe Carr, who was said to be heavily pregnant at the time of the incident, sparked a 30-strong mob outside the offender’s house. The agency worker told a group of local online paedophile hunters that the person was “bloody awful” and “deserve all he gets”, a court heard.

Ms Carr has now been handed a £500 by a Hull Crown Court judge, after admitting unlawfully disclosing private data without consent, according to GrimsbyLive.

The angry mob that she helped “whip up” reportedly lead to threats to burn down the sex offender’s house, which resulted in him moving.

Ms Carr, of Cottingham, a village of Hull, denied misconduct in a public office as a temporary staff member for Hull City Council, and the charge was dropped.

Charlotte Baines, prosecuting, said that Ms Carr was employed at the time by an agency which had been contracted to help the council direct members of the public to available online assistance.

Because of the coronavirus pandemic, she was working from home and had access to a work group chat.

Another worker sent a message explaining that a convicted sex offender had contacted the council’s customer services team asking for a food parcel to be sent to him in emergency accommodation, after his details had been posted online.

Ms Baines reportedly said that Ms Carr had told a group of Hull-based paedophile hunters that she had the details of the sex offender, but asked that her role in it remain undisclosed.

She said in messages that it was “disgusting” that the sex offender was still living in Hull near a school.

Ms Carr confirmed the authenticity of the address to the paedophile group in an exchange of messages on Facebook, the court heard, before sending a screenshot of the address.

She added: “This can’t come back to me due to my work.” The paedophile hunters then said that the address would be posted online shortly, and she asked them not to mention “it’s come from the council” as it might “come back” to her.

Ms Baines said: “The defendant made it abundantly clear that she worked for Hull City Council and the information needed to be kept anonymous.”

Later that evening in 2020, the sex offender contacted the police to say there were people outside trying to break his door down.

He reportedly told officers that they were telling him to “get out now or they would kill him and burn down the property”.

The police later identified Ms Carr as being involved in the origins of the address, and seized two laptops from her home.

The court heard she told police that she was “quite angry” as a heavily pregnant woman, and took it upon herself to take action.

Ms Baines said that Ms Carr “said that she knew it was wrong” and was subsequently “kicked out of the works chat. She wasn’t allowed to return to work, one assumes”.

Helen Chapman, mitigating, said that the exchange of messages with the paedophile hunter group had occurred just a fortnight before the birth of her son.

She said the offence was “short-lived” and that Ms Carr was in “something of a vulnerable position” at the time facing the prospect of being a single mother after the father left upon hearing she was pregnant. Ms Carr had no prior convictions.

Judge Mark Bury, presiding, said that the offence might not have happened had there been a “little bit more supervision”, but that it was still a “very serious one”.

He told Ms Carr that her action was “not a public service at all. They had done their punishment. It wasn’t for you to give their details out.”

Judge Bury continued: “The problem that this causes is that it destabilises offenders. It makes them unpredictable and more likely to commit offences that everyone else is trying their hardest to prevent them from doing. It’s not doing a public service at all. It’s a huge disservice.

He added: “If you work in the public sector again, you just have to remember that you have a grave responsibility with public details. You thought you were helping. You were not.”

According to GrimsbyLive, following the hearing, Ms Carr left the court with two female friends and headed excitedly across the to the pub.