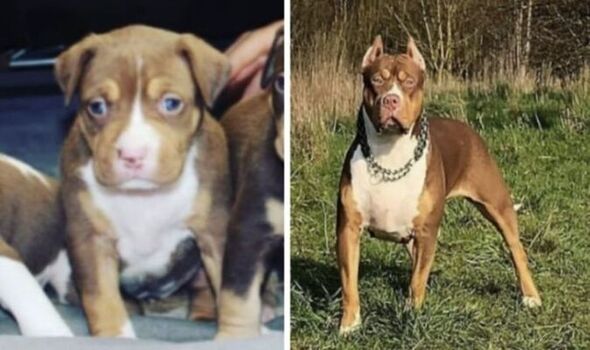 A couple were banned from keeping dogs after being found guilty of illegally cropping their ears.

The pair, who are both 30, were previously convicted of one offence each under the Animal Welfare Act relating to cropping, reports Essex Live.

RSPCA officers started an investigation after reports of dogs having cropped ears.

A warrant was executed at a property in Clacton where several dogs were found, including a number that had been cropped.

Officers also carried out online research into BullylairUK kennels and found a number of images on social media showing puppies who were being bred and having their ears cropped.

In her witness statement, RSPCA inspector Caroline Richardson – who compiled a research report based on the kennel’s Instagram images – said: “An image posted on May 9, 2020 on the BullylairUK Instagram page shows an entire litter of puppies with whole ears, stating they are four weeks old.

“Bjorn (pictured above) is then posted in December 2020 with cropped ears. Canny and Snell… both confirmed in interview this is the same dog and that they bred the dog.”

The couple claimed they adopted Bjorn when he was four months old, only to change their story and admit to breeding him, but saying they sold him to a friend overseas and he only returned when the “friend” arranged the cropping.

However, online evidence – including photos posted online during the time period he was allegedly overseas – suggests the dog was with them, and there are no travel documents to support their claims.

She has similar markings to a dog seen on the day of the visit (WR/6) – a “distinctive fork shape” white chest marking – with cropped ears.

When interviewed, the pair denied breeding her – saying she came from another kennel.

A third dog, Nylah, is seen pictured in May 2020 as a four-week puppy with whole ears.

Another photo in March 2021 showed her with cropped ears and it was claimed she was co-owned with another kennels.

In interview, Snell said she did not know who owned Nylah and Canny denied being her co-owner.

A fourth dog – Saber Tooth – is seen in an image posted on Instagram on 1 January 2021 with uncropped ears.

In March 2021, a video is posted showing Canny holding a puppy with very similar markings with his ears now cropped.

Canny said, in interview, that the puppy with cropped ears was a different dog and is from another kennels. He said that Saber Tooth was from Bulgaria.

Inspector Richardson said: “Ear cropping is an horrific practice which has absolutely no benefits for the dogs and can cause them lifelong health, behavioural and social problems.

“This is done purely for cosmetic purposes and sadly can lead to puppies being sold for much more money – but we’d urge the public and anyone looking to buy a puppy to remember that this is an illegal procedure which has hugely negative impacts for the dogs themselves.”

Both Canny and Snell have been disqualified from keeping dogs for five years.

Canny was also given a 12-week prison sentence – suspended for 12 months – and Snell has been given a curfew (9pm to 6am) for six months.

They have also had to pay more than £600 each in legal costs.