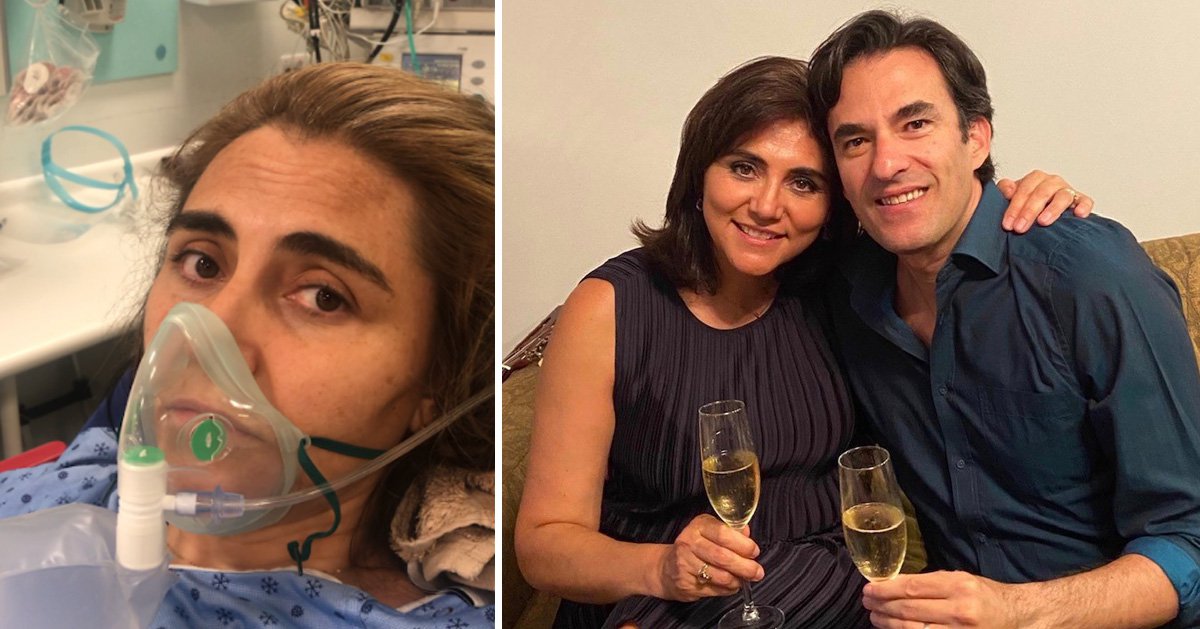 Valentine’s Day is a special day for many – but it’s extra special for a couple who thought they might not get to see it together.

Alejandra Avila and Jorge Arraya, of Molesey in Surrey, had just celebrated their 20th wedding anniversary earlier in the summer last year when disaster struck.

It was August, in between the coronavirus lockdowns, when mum-of-two Alejandra had a heart attack then went into cardiac arrest.

‘That day we’d had a day out with the neighbours and played Paddle, which is a bit like tennis,’ the 46-year-old told Metro.co.uk.

‘After the match, my husband and I went to their house for a drink and a nibble.

‘Once there, I remember not feeling well and telling them but without feeling overly concerned as the pain was not intense at all.’

She said she doesn’t remember much of what happened next, but she was told she went to the sofa to have a lie down and her neighbour gave her an indigestion tablet, then she and her husband went home to get ready for bed.

‘As I laid down and tried to relax my husband says he told me that if I didn’t feel well in five minutes, he would take me to hospital,’ Alejandra added.

‘Those words probably helped me to relax a bit but as I closed my eyes, I asked him to stay with me and touch my face because it made me feel better.

‘Asking him to stay saved my life. That is the last thing I remember.’

Jorge, 46, explained what happened after Alejandra blacked out.

‘In a matter of seconds, she lost consciousness and stopped breathing,’ he said, ‘Her heart stopped and she had no pulse.

‘Fortunately, I was right beside her when this happened, and I was able to realise that something was very wrong.’

He said although ‘nothing prepares you for this moment’, he almost instinctively managed to roll her on her side, grab his phone and dial 999.

‘Next thing I knew, I was being instructed by the operator to start CPR,’ he added.

‘This shouldn’t have been happening, but it was. My two teenage boys came to my aid and we placed her on the floor.

‘I quickly jumped on top, clasped my hands together and started chest compressions at the rhythm given to me by the 999 operator, who counted repeatedly to four and marked the time of each push I gave on her chest with all I had.’

It was nine minutes from the time Jorge placed the call until a paramedic inserted a tube into his wife’s airway.

‘They took over, connected her to a defibrillator, shocked her and restarted her heart, right there on my bedroom floor,’ he added.

‘These four people worked for over 20 minutes like you or I would make a cup of tea, calmly and procedurally, all under the intense pressure of my family shouting and crying.’

How to know if you’re having a heart attack

According to the NHS website, symptoms of a heart attack can include:

Some people may only feel minor pain, similar to indigestion. Women and older patients occasionally experience no pain at all.

If you think you’re having a heart attack, you should always call 999 straight away.

After her heart had restarted Alejandra was rushed to hospital and doctors ran an emergency angiogram at about 2am.

They discovered a 99% blockage in the left main coronary artery of her heart, and had to place a stent in her artery to restore the blood flow.

‘If it hadn’t been for Jorge and my sons I wouldn’t be here today,’ said Alejandra.

She said she has ‘made a good recovery physically’ – with no scarring or heart failure – but has to take some medication for the rest of her life.

‘I still have aches and pains from fractured ribs from the CPR and side effects from the medication – but that’s a very small price to pay for being here,’ Alejandra added.

‘But psychologically, it’s been much harder,’ she said, ‘I’ve had anxiety and felt scared that it will happen again.

‘I’m normally a very calm person when it comes to health matters, but I’ve been to A&E three times since asking to be checked, because I thought I might be having another heart attack.

‘I still have some sleepless nights, changes of mood, anxiety and so many more side effects that I’m still trying to get over.’

Alejandra now wishes to raise awareness of heart health after looking back on her symptoms prior to her cardiac arrest. Her dad had also died more than three years ago from a heart attack.

‘I was having chest pains but dismissed it as being hormonal or indigestion,’ she said.

‘Thinking back, I had felt a bit breathless when I climbed stairs and many times, I would abruptly get up in the middle of the night to try and catch my breath. So eventually, I thought I’d just go and get checked out.’

She went to her GP and then the hospital, and had several tests. One electrocardiogram concluded she had a ‘non-specific abnormality’.

‘I asked what that was, and the consultant said nothing to worry about,’ Alejandra added.

But she warned ‘chest pains are serious’. The NHS advises to call 999 if chest pain spreads throughout the body, if it feels tight or heavy, is in combination with feeling sweaty or short of breath, or lasts more than 15 minutes.

Of the couple’s Valentine’s Day celebration, Alejandra said: ‘We don’t have any special valentine plans per se but will be making homemade sushi. We have done it a few times in the past when our boys were smaller so will see if they enjoy doing it now they are teenagers!

‘I’ll probably just get yet another thank you card for my amazing husband who I can’t thank enough for saving my life.

He managed the situation so incredibly well and kept all family and friends informed with such calm. I really admire him. He is my forever hero.’