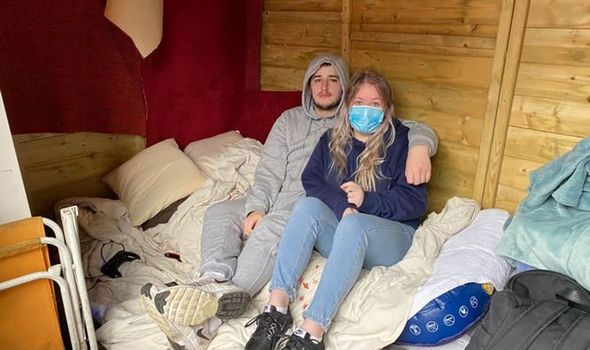 Macaulay Johnson and his partner Shannon Cullen, both 21, were booted out their home when they couldn’t pay the rent during the pandemic, reports Nottinghamshire Live. Mr Johnson had lost his job at a factory and the couple were penniless as a result.

Despite pleading to Labour-controlled Gedling Borough Council, the local authority were unable to help the couple and they had to set up a tent in which to live and use a supermarket trolley to store their belongings.

One night, the terrified couple said their tent was slashed with a knife as a thief attempted to get inside and steal their valuables.

But, when they were begging outside a Tesco in Bulwell, Nottinghamshire, a couple became so heartbroken by what they saw, they offered the pair a roof over their heads in the form of a shed at the bottom of their garden.

Ian and Lisa Marshall, both 43, have decked the space out with an electric heater, a mattress, and are feeding the couple each day.

They are even letting them use their shower facilities when they aren’t at home in Bulwell. 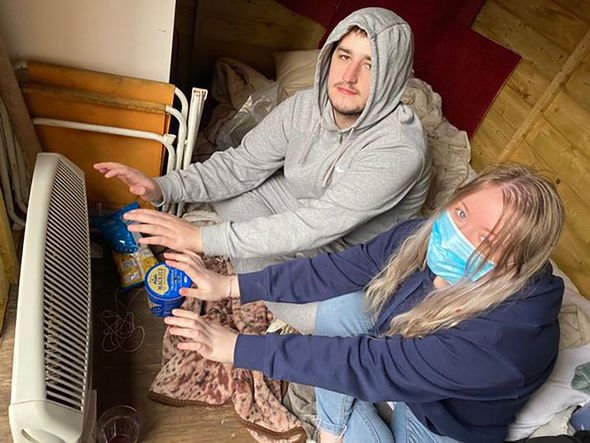 We have rung the councils every day. We have been on the streets for two weeks and sleeping in a tent by the tram tracks.

Mr Johnson, who has lived in nearby Nottingham since he was one year old, said: “We are so lucky we ran into them. They put heaters in there. I have never met nicer people. They did not need to do any of this.

“We have struggled to get a job during the pandemic. I was begging outside a takeaway just so we could keep up with the hotel bill. We have tried to do everything the right way.

“Some homeless people are drug addicts. We don’t even drink alcohol. We are just a normal couple that wants a roof over our head.

“We have rung the councils every day. We have been on the streets for two weeks and sleeping in a tent by the tram tracks.”

Mr Johnson, who has autism, said the council has been unable to home them as a couple because Miss Cullen moved to the UK from Ireland around four years ago and has no connections in the area.

Miss Cullen, who used to work in a call centre, said: “The council keeps saying ‘why can’t you go back to Ireland?’ but I have been here since 2017. We have been referred back and forth about 20 times.

“We would have died on the streets if we had not been given this shed. I was waking up and my whole body was cold in the tent.”

Mrs Marshall wishes she could do more, but due to Covid-19 and her own health issues, she can’t have the couple sleeping in the house.

She said: “I don’t know them. We went for a walk to Tesco and we saw them outside and when I saw the lady it really pulled at my heart.

“I was walking around Tesco and it was niggling at me. I said ‘you can put your stuff in our shed if you want’ but as we were walking back they said ‘can we stay in the shed?’ and I said ‘yes.’

“They are human beings. There is no humanity anymore.”

The kindhearted woman added: “I have got no money but how can I turn these two people away? They don’t take drugs. They are much safer here than out there – that’s what I think when I go to bed at night.

“My mum says ‘you do this all the time, Lisa?’ I said ‘you need to meet them mum.’ He had his Playstation with him and they have got lovely clothes.

“I wondered what would happen to my son if anything happened to me. I would hope someone would help him.”

A spokesman for Gedling Borough Council said: “Following Nottinghamshire Live contacting the council and making us aware of the situation we have contacted the couple and put them in temporary accommodation until we find a longterm solution.”