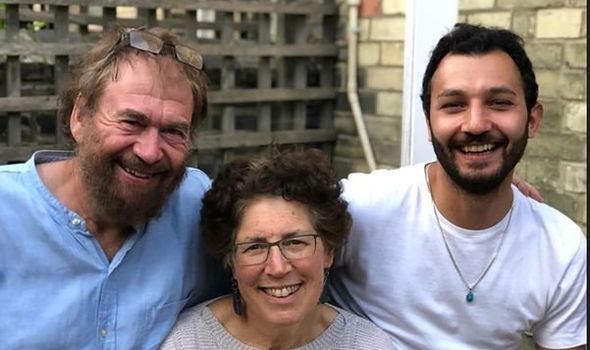 Simon Goldhill, 64, and wife Shoshana, 63, helped Faraj Alnasser develop his English language skills and supported him when he trained to become a chef. Faraj had walked across Europe from crisis-torn Aleppo, Syria, and was one of 14 refugees who came to Britain in a refrigerated lorry. Of these 14, he and one other were the only survivors of the journey around five years ago.

When Mr and Mrs Goldhill’s son left their home in affluent Cambridge, they had a spare room and were contacted by charity Refugees At Home.

The couple welcomed Faraj who had, for his first year in the UK, experienced “not great” treatment with a family in Huddersfield, West Yorkshire.

Since Mr and Mrs Goldhill helped the refugee, he opened his own restaurant Faraj’s Kitchen in central Cambridge, which helped 3,000 people during the coronavirus pandemic.

“What more motivation do you need than that? Most families, if you look hard, will find places in their history when they needed help from other people. We’re a Jewish family and many refugees survived through the Second World War because people helped them.”

The father continued: “If you don’t help people you’ve condemned to a miserable life. It’s simply the right thing to do, and I think many people who have taken on refugees in Cambridge who followed our example have had a great time too.

“It’s been fun. He [Faraj] is a serious Muslim, we understand that and we make sure we serve things we can eat together.

“If you’re kind and generous-hearted to people then it’s fine, most refugees are people who really struggled to get here and they want to commit themselves to being good members of society.

“Sign up and help because you know what, there are so many people who have extra rooms.”

With the withdrawal of US forces leading to the reemergence of the Taliban in Afghanistan, there have been thousands attempting to flee the country in fear of persecution by the new government.

Meanwhile, Angela Merkel looks to be the first world leader to break ranks with Joe Biden after she vowed to extend the August 31 withdrawal deadline for exiting the beleaguered region.

She told the German parliament today that “The end of the air bridge in a few days must not mean the end of efforts to protect Afghan helpers and help those Afghans who have been left in a bigger emergency with the takeover of the Taliban.”

She added: “That’s why we are working intensively at all levels to find how we can protect those who helped us, including through the civilian operation of the airport in Kabul.”