Anyone eligible for a vaccine who has not yet had a jab is being urged to come forward – with Britons in top priority groups being told it isn’t too late to receive one.

The government and the NHS have launched a new vaccine uptake plan that’s designed to reach vulnerable and underserved groups, and dispel the myths that surround the COVID-19 jab.

In England, 93% of over-75s have now been vaccinated, with the Department of Health aiming to achieve the highest possible uptake in other priority groups too.

Over-70s, care home residents and staff, health and care workers and clinically extremely vulnerable patients have now all been given the opportunity to get a vaccine – and a series of initiatives have been launched to reach those who may have declined the offer. They include:

• Mobile vaccination services to reach those who are housebound or less physically mobile
• Social media resources designed to debunk common myths about the COVID-19 jab
• Short films that provide accessible information about vaccines for people with learning disabilities including autism
• Turning virtual exercise classes into a forum where people can ask questions about the jab
• Translating vaccine resources into more than 13 languages
• Raising awareness about how the NHS is making vaccines accessible to everyone – especially ethnic minorities, people with disabilities, asylum seekers and homeless people

One care manager in London managed to increase vaccine uptake among staff by sharing a video of herself getting the jab on social media.

NHS medical director Professor Stephen Powis said those who may have been reluctant to receive a vaccine “have not missed their chance” – and encouraged them to make an appointment by using the online national booking service, calling 119, or contacting their local GP practice.

Vaccines minister Nadhim Zahawi added: “We recognise that some groups feel more hesitant about getting a jab, or have more barriers, both physical and mental, preventing them from accessing one when it’s offered.

“Each shot in the arm brings us closer to beating this terrible virus.”

More than 14 million people have now had their first COVID-19 vaccine, meaning the government is within touching distance of hitting its target of 15 million by Monday.

Jabs are now being administered at 267 hospitals, 1,034 local vaccination sites, 90 vaccination centres and 194 community pharmacies – and more than 98% of the UK population now live within 10 miles of a place where they can receive theirs.

“I’ve had it myself but understand that each person has their own specific reasons why they are hesitant, and I want to ensure every person I see understands the vaccine is safe and effective, as this will help us all get back to as normal a life as possible.”

Today, 30 government ministers are getting involved in the push to reach all those eligible, and are set to take part in virtual meetings and visits where they’ll hear from NHS staff, volunteers helping with the vaccine rollout, and those getting a jab. 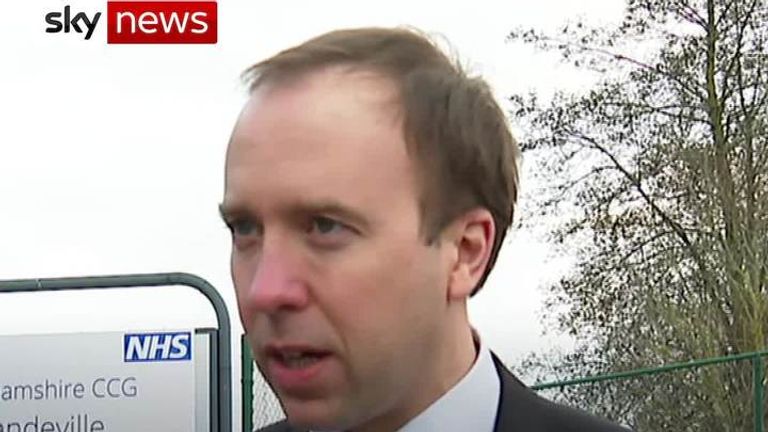 Health Secretary Matt Hancock said: “I am determined that we protect as many of our country’s most vulnerable people from this awful disease as soon as possible.

“Vaccines are the way out of this pandemic and it is testament to the strength of our Union and the combined power of the United Kingdom that we’ve seen such incredible progress in the rollout of our vaccination programme.”

Yesterday, it emerged that the UK’s R number has fallen to below one for the first time since July, and is now between 0.7 and 0.9.

This figure refers to the number of people an infected person will pass COVID-19 on to, and when the figure is above 1 an outbreak can grow exponentially.

The total confirmed number of coronavirus cases in the UK has now exceeded four million – with another 15,144 infections confirmed on Friday. There were 758 deaths recorded in the latest 24-hour period.