Health Secretary Matt Hancock says he is “increasingly confident” England is on track for the government’s coronavirus roadmap.

His words come after a study by Public Health England showed promising results for the two main vaccines being used to fight the pandemic in the UK.

Mr Hancock said: “I’m increasingly confident we’re on track for the roadmap because this data shows the vaccine after two doses works just as effectively, and we all know that the vaccine is our way out of this.”

The next step in England’s roadmap will see a further easing of social distancing restrictions on 21 June.

Both the Pfizer and AstraZeneca jabs were found to be almost as effective against symptomatic disease from the Indian variant as they are against the Kent variant after the second dose.

However, they were only 33% effective three weeks after the first dose, the Public Health England (PHE) report said.

Mr Hancock described the outcome as “groundbreaking”, while PHE said it expects to see even higher levels of effectiveness against hospital admissions and deaths.

The study, which took place between 5 April and 16 May, found that the Pfizer vaccine was 88% effective against symptomatic disease from the Indian variant two weeks after the second dose, compared with 93% effectiveness against the Kent variant.

Meanwhile, the AstraZeneca jab was 60% effective, compared with 66% against the Kent variant over the same period.

Mr Hancock said the study showed that “getting the second jab is vital”, adding: “This is a team effort and the whole nation is on the team.

Both vaccines were 33% effective against symptomatic disease from the Indian variant three weeks after the first dose, compared with about 50% against the Kent variant.

Some 12,675 genome-sequenced cases were included in the analysis, but only 1,054 were of the Indian variant.

The study included data for all age groups from 5 April to cover the period since the variant emerged.

Data from PHE showed there have been at least 2,889 cases of the Indian variant recorded in England from 1 February this year to 18 May. 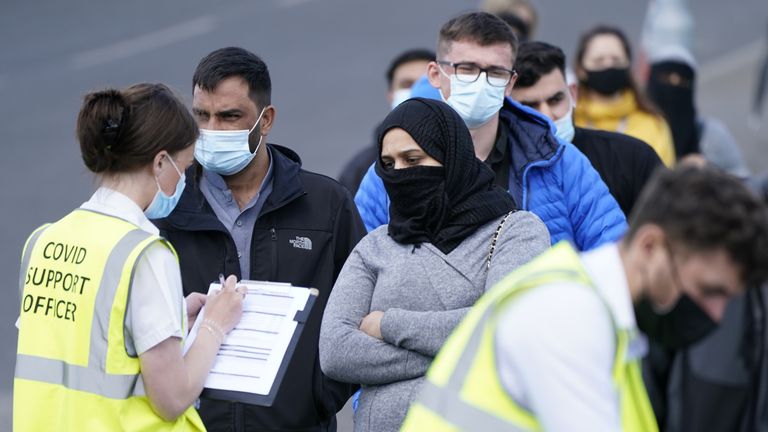 The most common variant in England, according to the data, is the Kent variant, with 132,082 cases recorded over the same period.

Some 1,569 people have died with the variant, while 2,011 cases resulted in an overnight hospital admission and 5,238 required a visit to a hospital emergency department.

Dr Jamie Lopez Bernal, consultant medical epidemiologist at PHE and the study’s lead author, said there was more confidence in the data from the first vaccine dose compared with that from the second.

He said: “There are bigger numbers that have been vaccinated with one dose. So I think we classify that as moderate certainty around the first dose, but low levels of confidence around the second dose.”

However, Professor Susan Hopkins, PHE’s COVID-19 strategic response director, said the data trend was “quite clear” and was heading in the “right direction”.

PHE said the difference in the effectiveness between the vaccines may be due to the AstraZeneca second dose being rolled out later than the Pfizer vaccine.

There are insufficient cases and follow-up periods to estimate vaccine effectiveness against severe outcomes from the Indian variant but this will be evaluated over the coming weeks, PHE added.

Asked about how the data could affect the easing of restrictions from 21 June, Professor Hopkins said it was “too early to say”.

She said: “One week post the last restriction lifting, we will be monitoring it very carefully.”

Dr Mary Ramsay, head of immunisation at PHE, added: “This study provides reassurance that two doses of either vaccine offer high levels of protection against symptomatic disease from the B1617.2 variant.

“We expect the vaccines to be even more effective at preventing hospitalisation and death, so it is vital to get both doses to gain maximum protection against all existing and emerging variants.”

Separate analysis by PHE indicates that the vaccination programme has so far prevented 13,000 deaths and about 39,100 hospital admissions in older people in England, up to 9 May.

Latest figures show that more than 50 million doses of coronavirus vaccine have now been given in England.

A total of 50,246,402 COVID-19 vaccinations took place between 8 December and 21 May, according to NHS England data, including first and second doses.