The snow is falling in thick clumps on Blackpool’s promenade and the freezing cloud hangs so low that the top of the famous tower is almost completely obscured.

The so-called “Golden Mile” of trinket shops and amusement arcades is closed. The town, like most places right now, feels lifeless.

Usually, the famous lights of the annual illuminations attract four million visitors to Blackpool, boosting the local economy by around £284m. But in November they were turned off for the first time since the Second World War. And two weeks ago, Britain entered a third lockdown.

And for many, this time around has been the toughest. 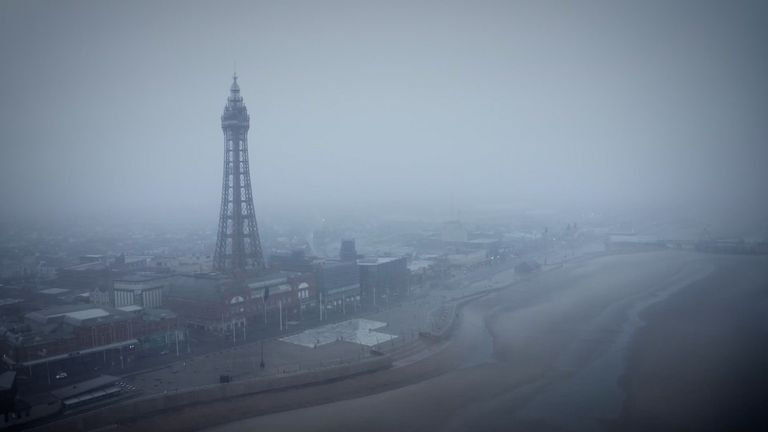 Mark Butcher sees up close the impact that the pandemic is having here.

“The weather is bleak and some people are feeling bleak,” he tells me.

Mark is a former addict turned evangelist who now runs Amazing Graze, a place where people can come to be fed. Mark usually helps the homeless, but it’s different now.

“We’ve got desperate people turning up at the soup kitchen every day. We’ve got families who have never come to see us before. Taxi drivers who have lost all of their business. People who have just got no money. They just can’t afford to live.” I first met Mark a year ago. He’s a tall, lean marathon runner who now runs the local church.

He bobs around on his feet when he talks. He’s enthusiastic and passionate about helping people. He’s never struck me to be downbeat.

Always positive. But even Mark can’t help but reflect just how deep this pandemic is cutting, especially in places like Blackpool.

Because even before the pandemic struck, this town was struggling. Eight of the 10 most deprived neighbourhoods in England are here.

It is in the top 10 for suicide and drugs deaths, and the seasonal economy means the summer has to be busy otherwise the winters are long and hard.

“The first lockdown was bad enough. The second one was incredibly hard. Now, I just don’t see and end to it.”

We walk towards Mark’s church as light fades and already a queue has formed outside.

“These people are queuing for food. Can you imagine how it feels to queue for food because you haven’t got a chance of eating if you don’t.” 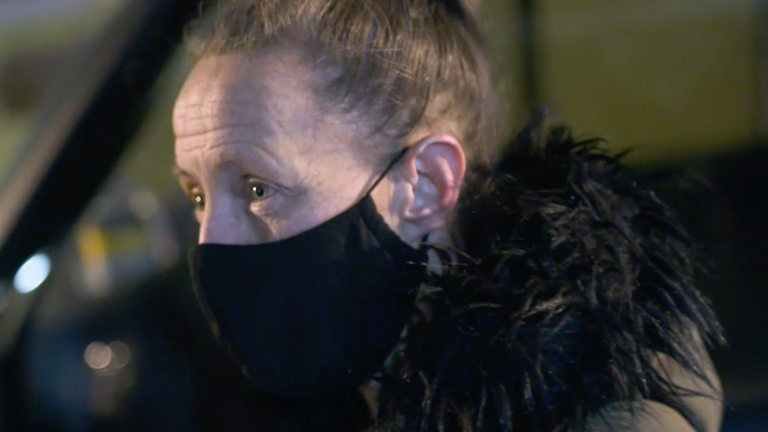 Sarah is a mother of five and she has come to the soup kitchen because money is extremely tight. She says she lost her job in April and began to claim Universal Credit but ever since then has struggled.

“I never thought I’d have to do this. It’s really bad at the moment. If it wasn’t for this place I don’t know what we’d do. It just seems everywhere you go in this town right now there are people who are at rock bottom.

“I’ve come for some bread and milk and some vegetables. And I’ll be back next week.”

Sarah used to work in restaurants and behind bars and was usually busy during the summer. But those jobs aren’t available during lockdown.

Inside the church packing food is volunteer Rachel Walmsley.

“We’re getting more families. Families that are struggling either because they’ve been furloughed or they’ve lost jobs and they just can’t make ends meet at the moment. They are waiting for the town to open up again and that seems a long way off at present.

For everyone, lockdown has been a struggle. Two weeks into the tightest set of regulations we’ve lived under since March, we’ve been speaking to people about how they’ve been coping.

Alice is 42 and lives alone in the northwest of England. In the first six months of the pandemic, the charity Rethink Mental Illness saw a 183% increase in the number of people seeking help about anxiety disorders.

Alice has lived with mental illness throughout her adult life and is now shielding with severe asthma.

“Art is one of those things that can really help people when they’re anxious and it makes a real difference to people’s lives if they’ve got something to focus on other than anxiety,” she says. Most days Alice sits and paints in a small timber shed at the bottom of her garden. This studio is now a sanctuary to fend off the effects of lockdown.

Two slightly abstract figures on the canvas have their hands entwined. They are Alice’s parents and she’s barely seen them in the last year.

“I get very frightened and paranoid. So that’s been quite a big impact on my life. But it’s also taught me stuff as well.”

Before Christmas, Alice says her mental health began to deteriorate.

“I felt quite suicidal just before Christmas, which isn’t a good thing. When that happens, I take as many walks as I can and try to make contact with other people. 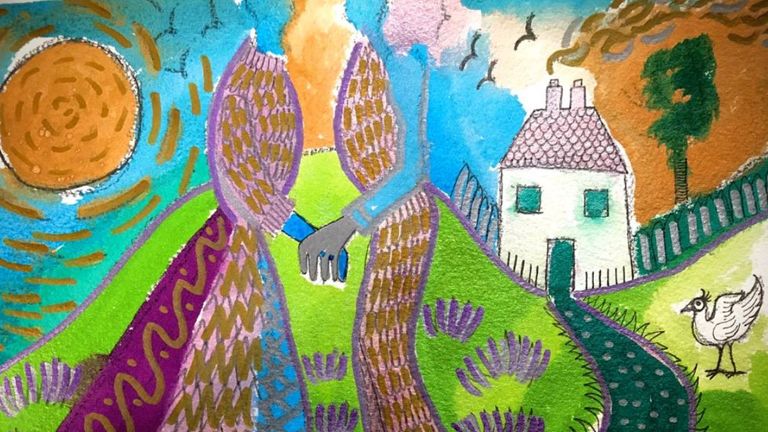 “It’s the support and kindness of other people and your ability to support and be kind too, that makes a difference to everyone.

“Out of really hard stuff sometimes comes a bit of a revelation as to how to survive things.

Jo and Simon run a café in Buxton in Derbyshire. They employ 12 people but when the pandemic struck the business was thrown into doubt.

During the first lockdown Simon made food and delivered to customers, but as the regional tier restrictions were introduced running a business became more and more unpredictable and so they decided to close until the restrictions ease. “I am always, always stupidly optimistic. I really am,” Jo says.

“I haven’t felt doom and gloom, but I can’t help but think about how long this is going to go on for and how much is this going to affect us and our business. “I look at businesses closing – businesses like ours – and I wonder whether we’re going to manage this. How will we cope? How will be survive this?

“Then I think about how we are going to have a busy cafe again and people are going to come back in droves because people will have missed going for coffee. And so I end up thinking that maybe we’re going to be OK.”

Vera Hart is 89 and has been shielding with her daughter Dee in Blackpool since March. Dee hardly leaves the house and has been relying on grocery deliveries and local charities.

“I am terrified,” says Dee. “I am terrified to leave the house in case I catch the virus and pass it on to my mum. The last few months have been horrendous. “It’s a lot harder now in the winter months. This is tough. We cannot wait for this to be over.”

Dee gets a food delivery twice a week – a hot meal that means one less trip to the supermarket. In the summer months Dee used to take her mum for a walk along the sea front.

But Vera can’t manage it in the cold.

So they stay indoors.