The national medical director for the NHS is urging any remaining over-50s to book in for their COVID-19 jab ahead of a vaccine slowdown from Monday.

Professor Stephen Powis has called on anyone who is eligible but has not yet received a first jab to book an appointment in the next few days.

The NHS is expecting a slowdown in the UK vaccine supply for the whole of April, meaning medics will concentrate on delivering second doses, with fewer first appointments available.

Watch Through The Storm: Inside The COVID Wards on Sky Documentaries on Thursday at 9pm and on Sky News on Friday at 9pm.

Earlier this month an NHS letter warned the UK faces a “significant reduction” in coronavirus vaccine supplies from 29 March, for an estimated four-week period.

The letter – which has been sent to local vaccination sites across the country – says volumes for first doses are going to be “significantly constrained”.

NHS England has said no first appointments should be booked for people under the age of 50 unless they fall into a higher priority group, such as those who are clinically vulnerable.

Prof Powis said: “It is a testament to the careful planning and sheer hard work of staff that the NHS vaccination programme is continuing to protect people against coronavirus at a record pace.

“I was thrilled to get my first dose earlier this month, it was quick, painless and safe and it feels great knowing I’ve got protection against COVID-19 – so if you are eligible, do not delay, book a jab.” 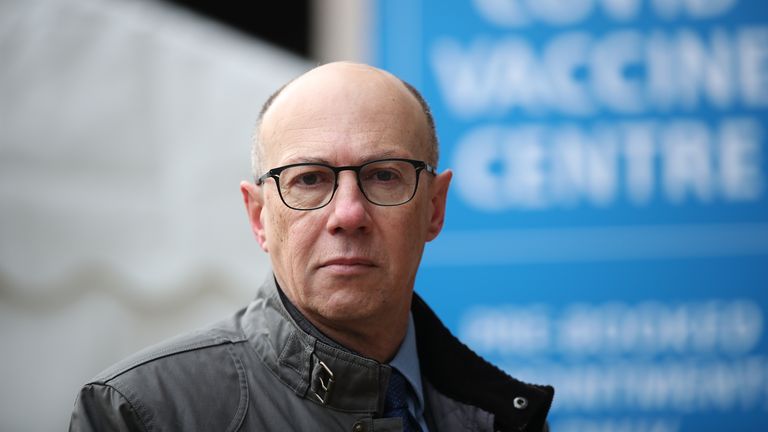 Health Secretary Matt Hancock previously said that the upcoming vaccine supply would be “lumpy” heading into April thanks to a reduction in doses available.

He told MPs the drop was caused by a need to re-test the stability of 1.7 million AstraZeneca vaccine doses as well as a delay in jabs from the Serum Institute of India (SII).

A new record of more than 840,000 first and second doses was delivered on Saturday, double the seven-day average a few days earlier.

However, that is about to come to a halt, Sky News understands, after SII told the government it would not complete its total order of 10 million doses.

Nevertheless, Mr Hancock told parliament last week that despite the delays, 12 million second doses would be delivered in the five weeks from 29 March.

Around seven in 10 people aged 50 to 54 have now had a first dose of a vaccine, according to NHS England. 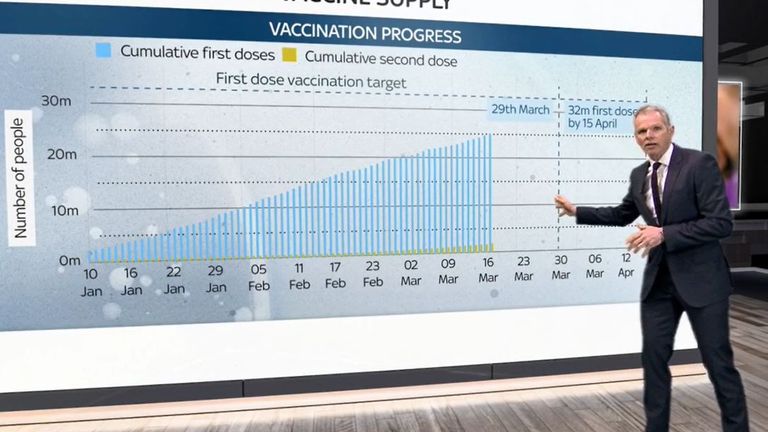 The UK government aims to offer a first vaccine dose to the 32 million people in the top nine priority groups by 15 April, a commitment ministers are sticking too.

Anybody aged 50 or over can book themselves in for a first dose before Monday online using the national booking system for England.

People aged 18 and over who are clinically vulnerable should also book themselves in for a vaccine.

GPs will continue contacting eligible patients on their lists and offering vaccines to anyone who has not had one so far.