It was the only thing that could pause a country binge-watching boxsets in 2020; a teatime appointment-to-view event that interrupted whatever we were doing and gripped a nation.

Analysing those briefings gives an insight into government communications during the pandemic: when they were and who appeared at them, as well as who was allowed to ask the questions.

There were just seven days of public briefings before prime minister Boris Johnson was forced to address the nation and place England under its first lockdown.

After that, the longest unbroken set of continuous updates was from Tuesday 24 March to Saturday 9 May – 47 days in total.

Then, another televised address took place instead of a briefing to announce an extension to the lockdown on 10 May.

After 26 more times in front of lecterns, the government decided that there would no longer be weekend briefings on Friday 5 June, which had slipped to only twice a week by July.

And by the end of Friday 31 July’s edition, there wasn’t another briefing until Wednesday 9 September, which left August the only month of the year without one.

A dozen different MPs took their places in front of the media.

Mr Johnson predictably is at the top of the leaderboard with 35 appearances, followed by Health Secretary Matt Hancock (30 appearances).

Despite deputising for the prime minister when he was ill with coronavirus, foreign secretary Dominic Raab only has 12 appearances but was still the third most likely politician to appear.

The only woman to represent the government was home secretary Priti Patel who, of all ministerial colleagues, ranks last in number of outings.

Arguably, Chief Medical Officer Chris Whitty has been the most recognisable face from the non-political representatives (with 30 appearances) but he was pipped to the most number of appearances from an official by his fellow SAGE member, Chief Scientific Adviser Sir Patrick Vallance (31 appearances). There were 28 different people from varied occupations in science, medicine, the military and more representing their respective fields to the audience.

The last person to make their debut was Professor Kevin Fenton, on Monday 14 December. He is among thirteen people who appeared just once all year.

In terms of choreography, Mr Whitty has stood on the right just five times, Mr Vallance on the left seven times, but they’ve never swapped their preferred sides when appearing together.

Out of the 40 people appearing in different combinations, there were just five occasions where women outnumbered men. An all-male line-up was overwhelmingly preferred, occurring 74 times – equivalent to 61%. 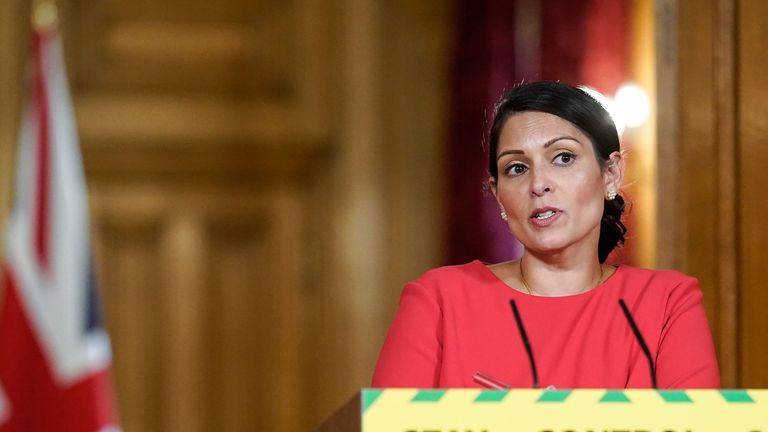 And 18 times there was a 50-50 split (but there were only 43 times two people appeared to make that possible). But looking at the division by race, an all-white list of speakers appeared 83 times – 69% of briefings.

Naturally, the state broadcaster leads the way in questions, with the BBC having a 100% chance of asking a question.

In fact, on two dates the BBC was represented twice – with BBC North West (on 24 April) and BBC Yorkshire (on 6 May) making an appearance as well as the national BBC News.

On only four occasions was the BBC not called upon first. Sky News had 79 opportunities to ask a question and ITV (including some appearances from their own regional outlets) made 106 appearances.

LBC was the most represented radio station (16 appearances).

Initially, the news conferences allowed nine different media organisations to ask questions, but rarely went further than six from May.

On Thursday 2 April there were a record 16 different outlets making an appearance. Members of the public were invited to ask questions from Monday 27 April – two were selected each day.

For those watching on mute, there were still some crucial messages to impart.

The importance of social distancing and working from home was made clear on Tuesday, 24 March, when the lecterns were placed slightly further apart and journalists were only allowed to appear via video call.

The messages on those lecterns went from the NHS website address for coronavirus information (16 March to 19 March) to various designs of “Stay At Home, Protect The NHS, Save Lives” (20 March to 9 May, with a festive break on Easter weekend for “Stay Home This Easter”), followed by “Stay Alert, Control The Virus, Save Lives” (11 May to 9 September) and finally “Hands, Face, Space” (from 24 September).

Although the briefings are set to continue in 2021, other hit TV series that aired as many times as a year’s worth of Downing Street updates include Glee (about a choir mixing social issues into their performances) and Lost (about people struggling to work together for survival).

You can see the data here.