The UK’s vaccine rollout has been among the most successful in the world, with Brits proudly queuing up to get their jabs and protect their loved ones from COVID-19. Millions never hesitated to get their third booster jab when the call was put out as the Omicron variant took hold across the UK.

The UK is among the most vaccinated populations in the world, with more than 132 million shots administered as of January 1.

The number of jabs given was significantly boosted when the Omicron variant became a serious threat throughout December.

Some 30 million boosters were given by December 22 – 56 percent of UK adults – with nearly one million jabs administered every day.

But the EU is being let down by some countries that have barely managed to get their booster schemes up and running at full speed.

And despite the UK’s high vaccination rate, some EU countries were still quick to implement travel bans on travellers from the UK.

READ MORE: Funeral officer in tears for pushing relatives away 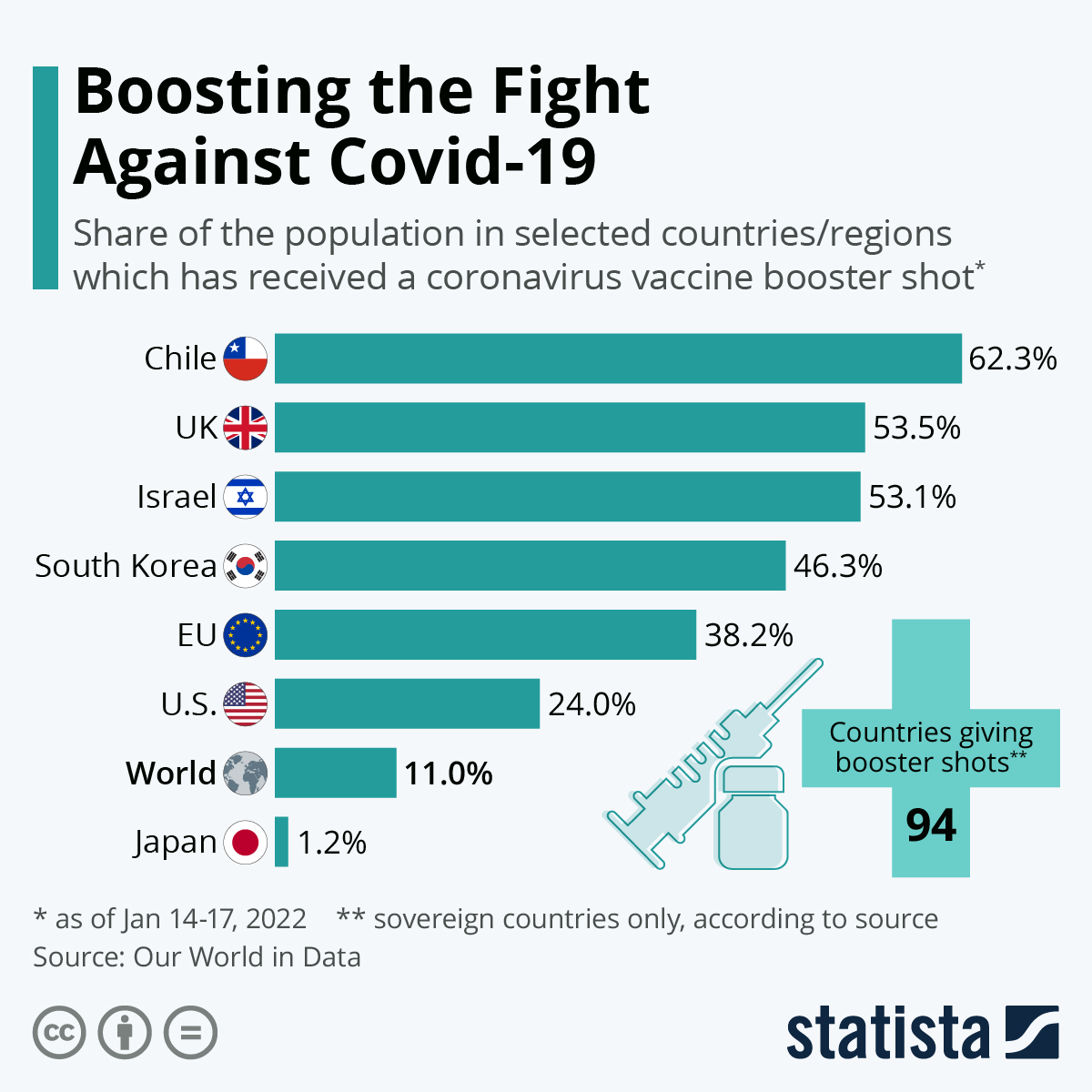 Which countries have administered the most booster shots?

Out of the 93 countries currently administering booster shots, Chile is streaks ahead of all other nations, with 60.5 percent of its eligible population receiving a booster vaccine.

The UK is in second place with 52.3 percent of all Brits jabbed for a third time.

Israel comes in third, with 50.7 percent vaccinated with three rounds.

But the EU is a considerable way behind the UK, with only 33.9 percent of the bloc’s total population receiving a booster shot.

According to Statista, Denmark, France, Ireland, Belgium, Germany, Austria and Italy have all managed to exceed the 40 percent mark, but they are let down by several countries.

Denmark has the highest rate in Europe, with just over half of its population given the third dose, followed by Austria with 46.4 percent and Ireland with 45.5 percent.

By January 10, Germany had administered 35.6 million boosters, or 46.9 percent of the population.

The Netherlands has jabbed 39.6 percent of the population, with Portugal and Hungary not far behind on 39.3 percent.

Italy is almost 10 percent behind Europe’s biggest economy, boosting 38.1 percent of its population.

The Swedes are pulling down the EU’s average, with less than a third of the population fully vaccinated at 30.9 percent.

Poland is also far behind leading countries, with just over a quarter of the population vaccinated at 25.3 percent.

Spain is considerably behind the UK and its EU counterparts, having only delivered boosters to 15.8 percent of Spaniards.

In Spain, the booster is currently only being offered to those over 40, but will soon be rolled out to younger age groups.

Croatia is also considerably behind all other EU member countries, with a mere 15.7 percent of the population receiving a third dose.